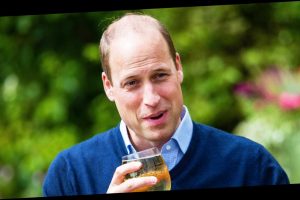 Royals, they’re just like Us! That is to say, they enjoy a beer just as much as the next person. In fact, despite a bevy of royal food rules that include no garlic and a ban on pasta for dinner, the most recognizable family in Britain is allowed to drink in public at officially sanctioned royal events. Not surprisingly, beer is a popular libation of choice with this blue-blooded clan.

Case in point? Duchess Kate, who was decked out in head-to-toe green and Prince William each sipped on a pint of Guinness on March 17, 2019 in Hounslow, England in celebration of St.Patrick’s Day. The future king and queen were on hand to meet with Irish Guards after attending the holiday parade at Cavalry Barracks.

And that’s not the only time the parents of three enjoyed a beer together, either. Back in July 2017, both the Duke and Duchess of Cambridge were spotted toasting with the popular drink after competing against one another in a rowing race in Germany.

In addition to sipping on a pint every now and again, the royal couple has been known to serve them, too. In February 2019, Kate stepped behind a bar in Ireland and tried her hand at pouring a pint all while wearing a designer dress, and she managed to do it without splashing her green gown.

As you might have guessed, other members of the royal family, such as Prince Harry and Prince Charles, are beer fans as well. Harry, who tends to be a bit more relaxed than his older brother when it comes to royal protocol, has even been spotted with a beer in St. James Palace, a royal residence he and his family once called home.

Scroll down to see various members of the royal family enjoying a beer.