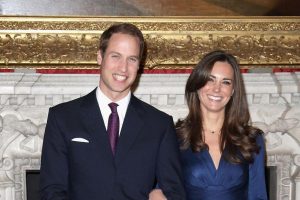 Prince William proved he was smitten with Kate gifting her a love taken years before they even got engaged.

The royal couple met while they were studying at St Andrews University and it wasn’t long before they made their relationship official.

Although it was nine years until they got engaged, following a brief split in 2007, William made it clear he wanted to marry Kate with a gift that has a sweet hidden message behind it.

Now the future Queen Consort, Kate’s jewellery collection is impressive boasting the likes of her famous sapphire engagement ring famously given to Princess Diana when she got engaged to Charles in 1981.

William presented Kate with his mother’s beautiful ring which has a 12-karat sapphire stone surrounded by 14 solitaire diamonds on a gold 18-karat band.

Kate wears the ring daily with her wedding band made from a special nugget of Welsh gold that was put on her finger when they tied the knot at Westminster Abbey in April 2011.

But Kate has another ring which has huge sentimental value, believed to be the first ever piece of jewellery that William gave to her.

While they were still studying, William presented her with an understated by stunning rose gold band which is set with a pearl and garnet.

The pearl represents William’s birth stone for the month of June and the garnet for Kate’s birthday in January.

Jeweller Eddie LeVain told The Express the ring also has another hidden meaning.

The CEO of jewellers LeVain said: “This beautiful, delicate ring is understated in style, but the very personal message hidden within it from a future King makes it an enormously romantic royal jewel.

“The ring is adorned with both Kate and William’s birthstones, in a celebration of their bond and the beginning of their intertwined destiny.

“Pearls are a June birthstone – William was born in June – and they symbolise love, purity, humility and innocence.

“Garnets are the birthstones for January, when Kate was born, and were named by the ancient Greeks for their colour resembling pomegranate seeds. Garnets signify protection and are thought to promote confidence and mental clarity.”

Kate is understood to have worn the ring on her third finger almost every day, including when she graduated, until William presented her with the diamond and sapphire engagement ring when they got engaged in 2010.