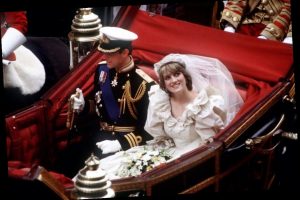 Princess Diana’s experience as a member of the British royal family was no fairytale. She became the Princess of Wales in 1981, barely 20 years old at the time.

After a disastrous marriage to Prince Charles, the two divorced in 1996. Despite the ongoing drama behind palace walls, Diana changed the royal family, making the Firm decidedly more modern.

She showed affection toward her sons, Prince William, Duke of Cambridge and Prince Harry, Duke of Sussex. She also let the world see her personality. Diana’s sense of humor led to plenty of laughs as did her spot-on impressions. But when Diana married Charles she felt she couldn’t be herself.

Millions of people watched her and Prince Charles’ royal wedding

The royal wedding took place at St. Paul’s Cathedral in London, England. Thousands of people attended what quickly became known as the wedding of the century. Meanwhile, an estimated 750 million watched the ceremony live on TV.

Diana’s iconic wedding gown featured a jaw-dropping 25-foot train. As for Charles, he looked every bit the fairytale prince in his Navy ceremonial dress uniform.

Still one of the most popular royal weddings ever, there were signs Diana and Charles wouldn’t last as a couple. They forgot to kiss after exchanging vows which led to the tradition of the bride and groom sharing their first kiss on the Buckingham Palace balcony.

Princess Diana felt she lost her personality on her wedding day

When Diana married Charles, she gained millions of fans but lost part of herself. During Diana’s most famous interview with Martin Bashir in November 1995, she confessed that she felt like she’d lost part of herself to the “royal machine” on her wedding day.

“The day I walked down the aisle at St. Paul’s Cathedral, I felt that my personality was taken away from me, and I was taken over by the royal machine,” Diana said, according to the Evening Standard Insider.

This wasn’t the only bombshell revealed in the Panorama interview. Diana’s other famous quotes from her conversation with Bashir included comments about Charles’ affair with Camilla, Duchess of Cornwall, bulimia, and her leadership style among other things.

Neither the bride nor groom wanted the royal wedding to happen

Weddings are normally a happy time for the bride and groom but not for Diana and Charles. Neither wanted to go through with the royal wedding.

Diana confessed her doubts to her sisters in the lead up to the wedding. And the night before the ceremony Charles cried. They, of course, went through with the nuptials and ended up divorcing 15 years later.

Diana died in 1997 and Charles went on to marry Camilla in 2004. Despite dying at the age of 36, Diana left behind a legacy that remains strong today.

END_OF_DOCUMENT_TOKEN_TO_BE_REPLACED

END_OF_DOCUMENT_TOKEN_TO_BE_REPLACED
We and our partners use cookies on this site to improve our service, perform analytics, personalize advertising, measure advertising performance, and remember website preferences.Ok