Home » Lifestyle » Princess Diana house: Inside the sprawling stately home the People’s Princess grew up in

Princess Diana house: Inside the sprawling stately home the People’s Princess grew up in 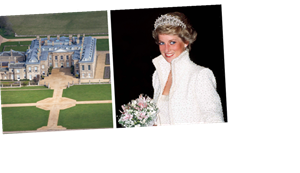 When Princess Diana married Prince Charles in 1981 it was hardly a case of rags to riches.

The young princess had grown up in a breathtaking stately home that rivals the palace in its luxury and size.

Althorp house has been in the Spencer family since 1508. The Grade I listed home was re-designed by Henry Holland in 1788 and has 90 rooms that hold a treasure trove of decorative arts and paintings.

The imposing building is set in 550 acres of sprawling grounds in Northamptonshire that play host to rare black fallow deer.

This aerial view of the property shows its scale, with huge manicured lawns and surrounding land galore.

The building was originally a red brick Tudor creation, but was radically altered by Henry Holland in 1788, who added mathematical tiles, as well as four corinthian pillars and encased all the brickwork.

As we can see in this snap of Diana’s father John Spencer and his second wife Raine the house has a grand staircase flanked by candelabras. There is a large chandelier hanging from the ceiling and many paintings adorn the walls.

In Earl Spencer’s study we spy a photo of a young Diana on the leather-covered desk. The walls are filled with books, and there are red armchairs and carpeted floors.

The house, which we bet has played host to many a spectacular party, also has a billiards room with overhead lighting, a red-patterned carpet and stucco decorative ceilings painted in gold.

This corridor is called Painter’s Passage and the walkway is flanked by both classical busts and alabaster heads. Painted blue, with white archways the space is very impressive and portraits by old masters hang in gilded frames.

The house is filled with fine artwork such as this portrait of the 2nd Earl Spencer created by the famous Sir Joshua Reynolds. As well as fabulous antique furniture such as this stylish, but not comfortable-looking, 18th century sofa.

The is The Great Room, which was at one time used for political meetings when one of Diana’s ancestors was First Lord of the Admiralty and Home Secretary.⁣ The deep burgundy walls ooze refinement and status, and of course there are more paintings.

This is just one of the many bedrooms in the home, with a dramatic red canopy hanging above the bed and Indian silk sheets. The room has large windows to look out on the grounds, and to be honest it looks better than any hotel room we could ever dream of staying in.

This room is so pretty, papered in Tiffany turquoise with a matching ornate silk canopy above the wooden bed. There is also a table with golden yellow chairs surrounding it, which compliment the painting frames.