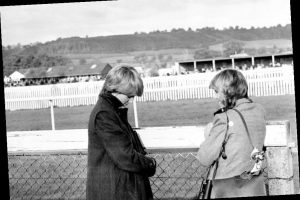 Princess Diana first met Camilla, Duchess of Cornwall, in 1980 when she was newly engaged to Prince Charles. The odd lunch between the women was chronicled in Netflix’s The Crown.

The princess later said that though she was very young, Camilla viewed her as a threat from the beginning.

Prince Charles and Camilla initially began dating in the 1970s. The young prince was immediately smitten with his now-wife because she was not impressed by his titles. She also didn’t fawn over him.

However, the royal family did not see the Duchess of Cornwall as a match for the Crowned King. After all, it was well-known that Camilla dated, and she did not fit the virginal image that the royal family wanted the future queen to have.

Ultimately, Camilla married her on-again-off-again boyfriend, Andrew Parker Bowles in 1973 when Prince Charles was stationed away with the British Royal Navy.

Following her own marriage to Parker Bowles, Camilla and Prince Charles remained very close. Therefore, when it was time for him to choose a bride, she pushed him toward Princess Diana, not seeing any real competition between herself and the naive 18-year old.

“Camilla initially encouraged the relationship between Charles and Diana because she thought Diana was gormless,” Tina Brown wrote in her book, The Diana Chronicles. “His family wanted it. The public wanted it. Like the last Prince of Wales, he liked to confide in married women, and his two favorites, Lady Tryon and Camilla Parker Bowles wanted it. They had met the blushing little Spencer girl and deduced she was not going to give them any trouble. Prince Charles was exhausted. He proposed.”

In fact, it appears that Camilla thought she would be able to manipulate the young princess, using her relationship with Prince Charles to her advantage. In her 2012 book, The Duchess of Cornwall: Camilla’s Story and Secrets, author Jessica Jayne writes via Express, “Camilla never saw Diana as a threat and felt that the late Princess could be someone she could manipulate.”

Camilla and Prince Charles remained very close after they were both married and struck up their affair in 1986. Princess Diana was always suspicious of her husband’s close friendship with Camilla, and she even publically confronted her about it.

“[I met her] very early on. I was introduced to the circle, but I was a threat. I was a very young girl but I was a threat,” Prince Diana said in Andrew Morton’s “Diana: Her True Story – In Her Own Words via Insider. “We always had discussions about Camilla though. I once heard him on the telephone in his bath on his hand-held set saying: ‘Whatever happens, I will always love you.’ I told him afterward that I had listened at the door and we had a filthy row.”