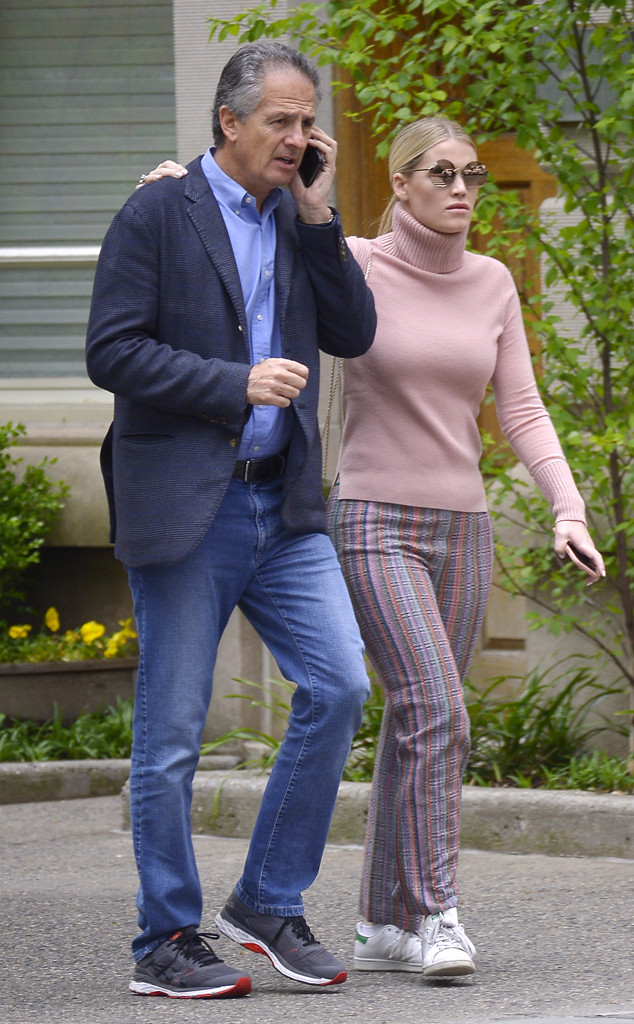 Princess Diana‘s niece Lady Kitty Spencer has made a pretty public display of affection with her rumored beau Michael Lewis (not the Moneyball author).

Lady Kitty and Lewis were seen out in New York City together on Wednesday and at one point, the 28-year-old wrapped her arm around the 60-year-old’s shoulder. She wore a pastel pink turtleneck shirt and multi-colored pants, which she paired with large circular sunglasses and her hair in a low ponytail. She also wore a massive diamond ring, but before anyone gets too excited, it was on her right hand.

Lewis went with a more business casual outfit. He donned a navy blue blazer with a light blue shirt and jeans.

According to Daily Mail, the couple was seen earlier this month leaving The Mark hotel in New York—the same place where Meghan Markle had her star-studded baby shower in February.

Lewis reportedly owns Whistles, a clothing company whose items can be found in some Bloomingdales around the U.S. as well as all across the United Kingdom. Daily Mail reports he is worth £80 million, which equates to over $102 million.

Rumors began swirling last year that Lady Kitty and the businessman were romantically linked, but they both kept things under wraps.

Lady Kitty became the Internet’s sweetheart last year when she attended Prince Harry and Meghan’s royal wedding at St. George’s Chapel on May 18. She told Harper’s Bazaar in March that her Instagram followers skyrocketed after gaining more tabloid attention.

“It was definitely unexpected,” she told the magazine.

The 28-year-old grew up in Cape Town, South Africa, but lives in London now where she’s a model. Kitty now serves as a brand ambassador for Bulgari and she’s definitely paved a path for herself as a fashion icon of sorts.

She told Harper’s, “I’m really glad I had a childhood in South Africa. There are not many places in the world where you can actually have something that’s so free, just natural and relaxed. I was lucky to have a childhood there.”

Based on her Instagram profile, Lady Kitty is ever the jet-setter. Just earlier on Wednesday she posted photos and videos of herself in Seattle. She did some sightseeing, like visiting the Space Needle, Pike Place Market, the first Starbucks location as well as Dr. Meredith Grey’s house. Just one day before that, she shared pictures of herself atop the Sydney Harbour Bridge with the world-famous Sydney Opera House in the background. Before that, she was back in London as well as South Africa.

Where in the world will she go next?! And will Lewis accompany her?