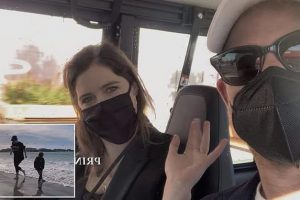 Princess Eugenie was captured spending time with her cousin Prince Harry and his son Archie while in LA in the Duke and Duchess of Sussex’s Netflix documentary.

The 32-year-old royal, daughter of Prince Andrew and Sarah Ferguson, appears in the final episode of the six-part docuseries.

She is filmed attending the Super Bowl in California in February 2022, as well as playing at an undisclosed beach with little Archie, and enjoying a bike ride alongside Harry.

The first three episodes of Harry & Meghan – part of the Sussexes’ multi-million-dollar deal with Netflix – were streamed last week, with the final three hour-long episodes streaming from today. 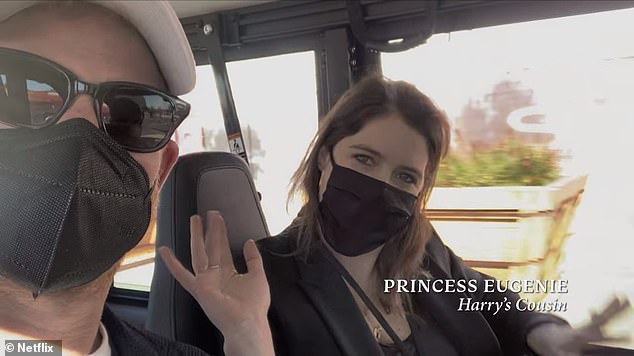 She is filmed attending the Super Bowl in California in February 2022, as well as playing at an undisclosed beach with little Archie, and enjoying a bike ride alongside Harry

The Sussexes’ six-part show – which forms part of their multimillion-pound deal with Netflix – has become the streaming giant’s most-watched documentary in a premier week, debuting with 81.55 million hours viewed.

The initial tranche covered the couple’s courtship and romance, but many were left deeply unhappy about the programme’s assault on the late Queen’s Commonwealth legacy, with some saying it seemed as if the couple want to ‘bring down the monarchy’.

Harry also let rip with a string of sly digs at his family, particularly his father and brother, including the suggestion that they had married not for love but to a woman who fitted ‘the mould’.

The duke also said members of his family questioned why Meghan needed more protection from the media than their wives had been given, but that they failed to grasp the ‘race element’.

The claims made in the trailer yesterday were quickly declared by royal experts as ‘nonsense’, while one commentator said the series was clearly a ‘form of revenge’.

In one clip, Meghan’s British privacy lawyer Jenny Afia insisted she had seen evidence of the conspiracy against the Duchess before Lucy Fraser – real name Lucy Meadmore – a former PR manager who was a mystery figure until a week ago, says ‘Meg became this scapegoat for the Palace’.

The Duchess herself also suggested she was made a scapegoat, adding: ‘You would see it play out. A story about someone in the family would pop up for a minute, and they’d go: ‘We’ve got to make that go away’.’

But Royal Editor for the Daily Mail Rebecca English said last night that only someone ‘utterly ignorant of the media’ would suggest that she would steer clear of a story about a royal family member in return for a disparaging tale about Meghan or Harry. Writing in the Mail, she said she ‘never heard a negative word’ about the Sussexes until ‘at least six months after their marriage – and then not from anyone inside the palace walls.’

In fact, Ms English believed aides did all they could to keep up appearances when it appeared that ‘all was not well’ within the Sussex household.

She added: ‘Staff, they insisted, were leaving for personal reasons or because they had an exciting new opportunity to pursue. Never because of Meghan.

‘Even when I personally witnessed her round on a member of her team, leaving this individual in tears of humiliation, I was told – with a straight-face – that it had merely been a ”security incident”.

‘I had stand-up rows with palace staff when I suggested they had been economical with the truth and my fact-checking calls regarding stories I intended to publish were met with open sighs of frustration.’

She also said she chose to omit Harry’s ‘frankly rude and unprofessional behaviour towards the press’ from her copy, as the 38-year-old’s ‘impressive charity work deserved to be the star of the show.’

She added: ‘The truth is that negative stories about Harry and Meghan only began to eek out when their behaviour became so obnoxious that it was impossible to hide,’ she wrote.

‘And that’s not something I expect you will hear about when today’s dramatic finale lands on Netflix.’

There were mounting calls overnight to see the evidence for the highly damaging claim, with one royal source declaring: ‘No one is taking lessons in honesty from them.’

Royal commentator Richard Fitzwilliams also called on filmmakers to back up claims made.

Responding to the trailer released yesterday, Mr Fitzwilliams told MailOnline it showed ‘how much of a coup for Netflix this docuseries is.’

He added: ‘The claim is that the Palace used Meghan as a ‘scapegoat’ so other damaging stories about other royals would go away.

‘So the question is, to benefit which royals and who knew about it? Which other members of the royal family were involved or were courtiers briefing without their knowledge?

‘William was named in an earlier trailer by Harry. This will be catastrophic for the relationship between the once close brothers.

‘What exactly is the evidence that backs up their claim that Meghan was ‘fed to the wolves’?

‘Essentially the claim is that the institution was working against them and using the media to discredit them with a barrage of negative articles. Her lawyer Jenny Afia says she has seen evidence. However what evidence will we be shown?’

He added: ‘This is undoubtedly a form of revenge. It remains to be seen after the series airs, if the royals will respond and if so, how.’