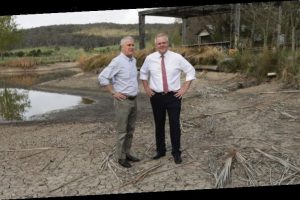 Australia has to upend the way water is supplied if it is to cope with climate change and an extra 11 million people in capital cities, the Productivity Commission says as it demands greater scrutiny of government spending on projects that promise “illusory” new water to parched communities.

In a draft report into national water reform, the commission raised serious concerns about the Morrison government’s new National Water Grid, warning without changes to its remit the agency could end up subsidising the private sector with taxpayers’ cash. 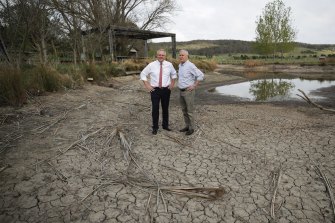 Drought led Scott Morrison and Michael McCormack to promise the National Water Grid in 2019, but the Productivity Commission says the agency could end up subsidising the private sector with taxpayers’ cash.Credit:Alex Ellinghausen

The commission said governments at all levels had failed to remain focused on the challenges facing water policy despite the near disaster of recent droughts which had left regional towns without water.

The report was started in 2019 in response to a previous Productivity Commission inquiry into national water reform. The new report canvasses the National Water Initiative, a policy in place since 2004 to improve water allocation across the country that itself was in response to the devastating Millennium drought.

The commission found while the initiative’s goal was still “sound”, it had to be modernised to take into account adaptation to climate change, the importance of water to Indigenous Australians, better water planning, increased measurement of water diversions and stronger government oversight.

Governance had been “significantly eroded” over recent years with the responsible ministerial council disbanded, the National Water Commission closed and states no longer prepared to put in place ongoing plans to reform water services.

This had come despite the growing awareness that both climate change and population growth would put tremendous strains on the nation’s water system.

“This will likely mean material reductions in water availability for most of the country and an increase in the frequency and severity of droughts and floods across the nation. And it will accelerate change in irrigated agricultural production,” it found.

“The droughts and water scarcity experienced during the past 20 years are likely to be a harbinger of things to come. The reality is that Australians will need to become even more adept at dealing with drought, and communities, industries and the environment will have to adapt to lower water availability and more uncertainty.”

The drought leading into the Black Summer prompted promises from all levels of government to secure water supplies, the Morrison government in 2019 created the National Water Grid authority and pledged $3.5 billion in funding for new water infrastructure projects. 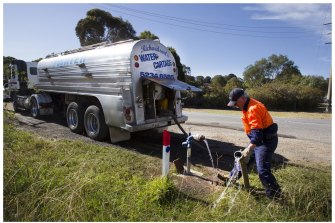 A string of regional centres was forced to truck in water during the Black Summer drought. The Productivity Commission says this should be a wake-up call for water policy.Credit:Simon O’Dwyer

But the commission said the grid’s remit should be changed to ditch its focus on supplying water to the farm sector, arguing the new authority was effectively becoming a subsidy for farmers.

“Australian government investment in major water infrastructure should neither prioritise a particular sector or class of water user, nor be limited to providing water for primary industry,” it found.

“Funding major water infrastructure for the benefit of primary industries would amount to subsidising a commercial operation.”

The commission said the grid should look at funding access for essential town water and also proposed projects worth more than $100 million be reviewed by Infrastructure Australia. The threshold for project review is currently $250 million.

The PC noted what it described as the “flawed” planning process for the Dungowan Dam near the northern inland NSW city of Tamworth. The project, initially priced at $150 million, is now slated to cost the federal and NSW governments $484 million for water the commission estimates is worth just $10 million a year.

While households had slashed their water consumption since the millennium drought, the commission found capital city residents would face growing pressure on water supplies.

It found new sources of water, including stormwater and so-called “recycled” water, should be brought into the general water supply debate. Local council bans on recycled water should end.

Better pricing of water would then enable governments to make more informed decisions on new sources, whether to introduce water use restrictions or build infrastructure such as desalination plants.

The report called for the removal of exemptions granted to the minerals and onshore gas industries from water regulations that govern consumptive uses and argued increased development in the past few decades had highlighted the difference in rules applied to farmers and miners.

Australia signed the United Nations Declaration on the Rights of Indigenous People in 2009, which states Indigenous Peoples have the right to water resources they traditionally owned. The commission said federal and state regulations should be reformed to deliver more water rights to Indigenous Nations, which barely own any entitlements, for cultural environmental and economic uses.

A study from Griffith University found Aboriginal people comprise 9.3 per cent of the population in NSW’s Murray Darling Basin, but only hold rights to 0.1 per cent of the value of the water market.