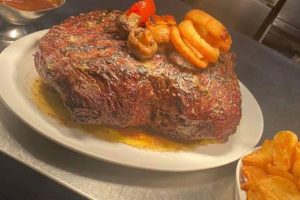 There's nothing quite like a good steak, but could you handle one the size of a newborn baby?

A pub near Oldham is offering customers the chance to tackle a 100oz rump steak.

Served alongside onion rings, tomatoes, chips and mushrooms, the total calorie count stretches to a huge 6,000.

Those who manage to polish off the plate will receive their £60 meal for free.

There has been one challenger so far, who was unable to finish the meal after a one-hour sitting.

The pub say they have received plenty of interested callers keen to take on the huge slab of meat.

But others have been critical, calling it "wasteful".

So could you finish the meal?

The huge meal is being offered at The Black Ladd in Shaw, near Oldham.

General manager Keiran Leach spoke of his confidence that punters would be unable to finish the meal.

He said: "The first person did it yesterday and had a good go at it but he got just under halfway through and the other half he took home with him, which will probably do his teas for the rest of the week.

"I think he did well, but the fact that he did well and only got that far shows how hard it would be to complete because you do have to finish everything."

He added: "I don't think it's possible because it's such a big challenge."

Food challenges such as this often prove popular with people up and down the country, so it might not just be locals who are attracted to the pub.

Keiran said: "You get people that travel all over the country to take on these challenges and there might be someone that's experienced and very good that may be able to do it.

"It's been ridiculous. Ever since it got put out that night the phone just wouldn't stop ringing.

"There is still availability but there are about 15 people booked in between now and the end of November – we've got three on the same table tomorrow night."

If you do want to take on the challenge, contact The Black Ladd.

Should I try the challenge?

The challenge is hardly beneficial to your health.

6,000 calories is a huge amount of energy to take in and it goes without saying that such an intake of food would not be an ideal scenario with underlying conditions like difficulties with bowel movements or a heart condition.

To put it into perspective, the NHS said: "Generally, the recommended daily calorie intake is 2,000 calories a day for women and 2,500 for men."

Keiran said: "From a business point of view we're trying to get publicity but we do understand it's a lot of meat for one person."

For more stories from the Daily Star, make sure you sign up to one of our newsletters here