Puppies rescued after being abandoned in car at Caterham Tesco 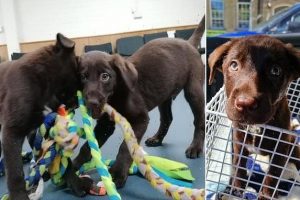 The RSPCA has rescued two 10-week-old Labrador crosses after they had been left in a car for at least a day.

The two tiny pups were spotted stuck in the car in a supermarket car park in Surrey.

Concerns were raised about the puppies who were shut inside a crate in the back of a car parked in the car park at Tesco in Caterham on Sunday 19 June.

RSPCA animal rescue officer, Chloe Wilson who is now looking into the incident, said: ‘People were concerned about the puppies who’d been shut inside the car which had been left unattended for some time.’ 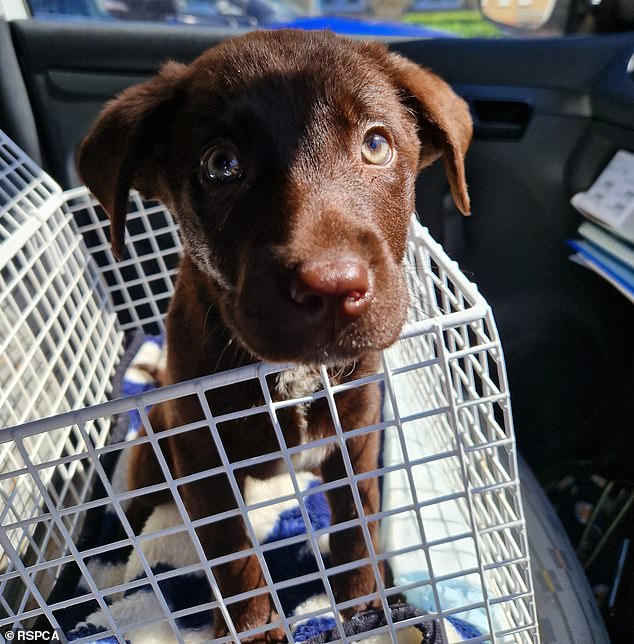 Two 10-week-old Labrador crosses were rescued from a car parked in Tesco carpark in Surrey, after being left for 24 hours 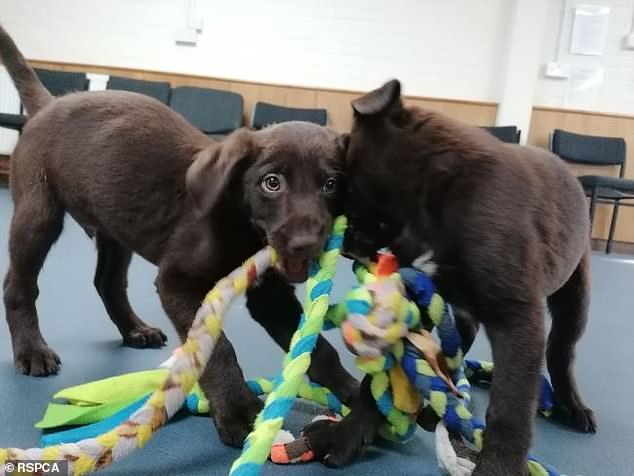 The tiny pups, who have been named Bow and Bandit, had been spotted in the abandoned car and concerns raised when the owners never returned

Chloe detailed how the witnesses said that the puppies had been seen in the car the previous day and were believed to have been locked in for at least 24 hours.

Local vets managed to get to the dogs via a partially open window and took them to their clinic to check them over.

Chloe said: ‘An owner made contact with the vets and claimed they were their dogs but never attended to collect them. We’ve been trying to make contact ever since and have had no luck. The car is still in the car park.’

The RSPCA has now taken the puppies, who they’ve named Bow and Bandit into their care at the Millbrook Animal Centre, where they are doing well. 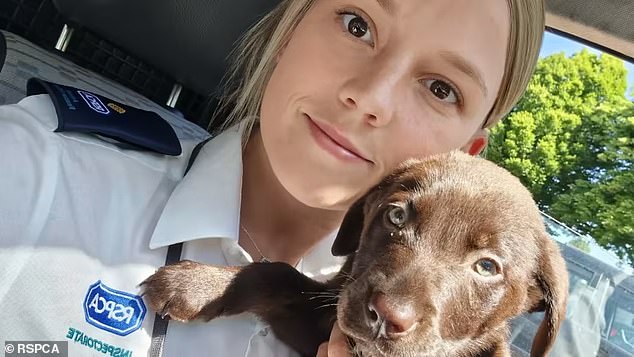 RSPCA animal rescue officer, Chloe Wilson (pictured) who is now looking into the incident explained how local vets managed to free the pups via a partially open window 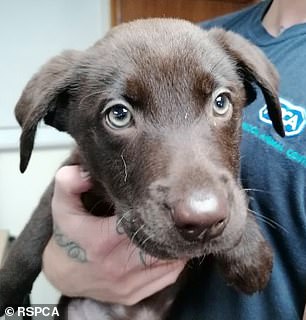 The two dogs, Bandit (left) and Bow (right) were taken to the vets and have now been placed with Millbrook Animal Centre, where they are doing well

Chloe added: ‘Thankfully these puppies were okay but it could have been a much more tragic ending for these innocent pups. It’s been really hot recently and when it’s 22C outside it can quickly reach over 40C inside a parked car.

‘That’s why we run our Dogs Die in Hot Cars campaign with a coalition of other groups every year – to raise awareness of the dangers of leaving animals in cars, caravans, conservatories and other hot environments.

‘I’m so thankful to everyone who helped these little ones, and I’m pleased that they’re now safe in our care and will eventually be looking for new homes.’

The charity wants to remind anyone who is struggling to take care of their pets that they should speak to friends, family, vets and local charities for help.

Never leave your dog alone in a car on a warm day. If you see a dog in distress in a hot car, dial 999.

Many people think it’s ok to leave their dog in the car if they’re parked in the shade or the windows are open. But a car can become as hot as an oven, even when the weather doesn’t feel that warm. When it’s 22 degrees Celsius outside, the car could reach an unbearable 47 degrees within an hour. It’s very dangerous and will cause your dog suffering and harm.

First, assess the dog’s condition. If they’re showing any signs of heatstroke dial 999 at once.

If the dog’s condition is critical, and the police haven’t arrived yet, your instinct will be to break into the car to free them. But please be aware that this could be classed as criminal damage. You may need to defend your actions in court, so please be sure you’re doing the right thing. Legally, you can commit damage if you believe the car owner would consent to it if they knew the dog was in danger.

If you’re sure you need to free the dog, tell the police what you intend to do and why. Take photos or videos of the dog. Are there any other witnesses? Take their names and telephone numbers.

Don’t be afraid to dial 999. If it’s an emergency, we may not be able to get to you – and the dog – quickly enough. And as we have no powers of entry, we’d need to ask the police to help us rescue the dog. Don’t worry – the police will soon let us know if the dog needs our help.

What to do once the dog is free

Check if the dog is showing signs of heatstroke or is in distress. If they are, immediately follow our emergency first aid advice. This could mean the difference between life and death for the dog.

How to help a dog who appears to be okay

If the dog doesn’t seem in distress, you can leave them in the car and follow these actions.