Let’s start with the most important question: do you bake?

It’s great you asked. No. Next question. 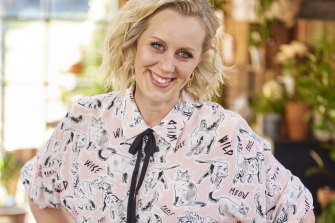 Claire Hooper, co-host of The Great Australian Bake Off

Well, I didn’t really before, I never … all right, let’s go deeper. You may as well get the deeper answer, and that’s that when we were kids, my mum let us into the pantry to invent things, let us make mixtures. Then she’d bake them, she’d dutifully bake them, and we’d often eat them. I don’t think I’ve said this out loud for a really long time … it’s extraordinary she let us do this. Anyway, the point is I had two little brothers, and as the big sister, who was always interested in the approval of adults and such, I would always try to make my mixtures sensible and healthy. And my brothers would always tip entire bags of sugar into theirs. Then at the end of it, nobody’s were good – but theirs were so much more edible than mine. I think that’s been a core part of understanding me as a baker. My mother also let me sew something that she let me wear to a party when I was nine years old. That was also a core experience – I’m really good at sewing and I never really vibed with the kitchen.

It’s just not your forte.

My husband is really, really good, and he just does all the kitchen stuff in our house. And I see it happening again: sometimes when I watch what he puts in, how much butter and salt is required to make something delicious. I don’t want to have to do that for it to be good.

As a host of Bake Off, is the fact that you don’t vibe with the kitchen helpful? Because you need to be impressed by the contestants, and if you were really good at baking, you might not be able to sincerely act impressed.

See, exactly. It is necessary for there to be someone on the show who doesn’t understand baking. Obviously it can’t be the contestants and even more so it can’t be the judges: therefore it must be the host who doesn’t understand. I need to be gasping at what they do and asking all the dumb questions, because there’s absolutely nothing interesting to watch if someone explains a complicated process and I go, “Yeah that’s what I’d do too.” That’s no good, right?

Absolutely. I watch it, and I have no idea what they’re doing, so you’re my proxy in the kitchen.

Good, I’m so glad. I was talking to some producers today – I was doing some voiceovers, my favourite bit, where I get to say things like “Jeremy is baking a cheesecake flavoured with raspberry coulis”, or something like that. Let me tell you, nine times out of 10 I will have forgotten that you have to eat before it, and sometimes they have actually picked up my stomach rumbles on the recording. Anyway, I was talking to the producers and we were discussing, does everyone who watches the show bake? And I was like, absolutely not. Before I was on this show I was one of the biggest fans of the UK one, and I absolutely don’t bake. I appreciate the artform, but I think most people watching don’t do it.

It is a show where everyone on it is good at what they’re doing – they’re amateurs but it’s not amateur hour.

Probably by going on that show they’re proving their badness at marriage.

But yes, even if you don’t know much about a subject, it’s always good to watch people who are really good at something do what they do. That’s what watching sport’s all about.

You’re right! Oh man, I think you might’ve just captured what the show is: it’s like sport for people who don’t want to watch sport. And specifically cricket. It’s the pace of cricket.

The British version certainly brings to mind the village green in the same way as cricket. But in all the versions, wherever it takes place, Bake Off is a very positive, upbeat show, where people are nice and supportive of each other. Is that a natural thing for you, or do you repress your natural cynicism?

Oh no, how dare you. But that’s a really interesting question. There’s a lot of TV that requires tension and dramatic release, and it requires people to be uncomfortable for long periods of time, and I really don’t think I’d survive on one of those shows. I’m constantly grateful on Bake Off that I’m allowed, if somebody looks tense, I’m allowed to go in and defuse the tension. Whereas on another show it’d be like “leave them, they’re about to break, leave them”. I’d not at all be at ease if we weren’t allowed to make everybody as comfortable as possible. That’s why it suits me.

The Great Australian Bake Off (season 5) premieres on Foxtel at 8.30pm on January 27.