Queen Letizia does ‘unusual gesture’ in public mirrored by her daughters 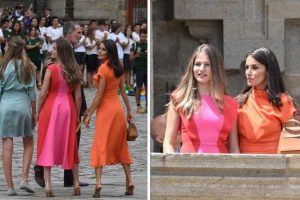 Queen Letizia of Spain at the CaixaForum cultural centre

Queen Letizia and King Felipe were photographed alongside their daughters, Leonor and Sofia, on Monday, July 25. The family attended a national offering to the apostle Santiago at the Cathedral of Santiago de Compostela.

The women looked beautiful in colourful dresses and the whole family seemed happy, according to a body language expert.

Judi James claimed that whenever she is out with her daughters, Letizia always looks confident, inspiring Leonor and Sofia to be confident too.

Her facial expressions ooze pride and affection – towards her husband, Felipe too.

Judi continued: “Letizia and Felipe do seem to have no inhibitions about hand or arm-holding in public, and she will also be very open in her signals of pride and affection when it comes to her facial expressions. 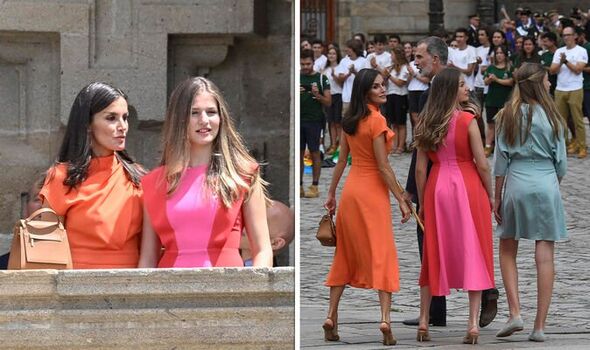 “At more formal occasions or group visits like this one though she will often prefer to keep her arms at her sides in what looks like a bid to create an evenly-balanced effect between herself and her daughters.

“The mirrored pose suggests three confident women rather than one wife, or mother, and two young daughters.”

Judi explained that this “results in the two girls mirroring their mother and all three standing tall with their arms hanging relaxed at their sides in an unusual gesture of confidence and assertiveness”.

This kind of body language is unusual because royals do not usually let their arms hang by their sides.

“We tend to see royal woman holding bags or using a hand clasp at waist height to keep their hands occupied,” Judi said.

“But Letizia seems to be encouraging a sense of strength and solid self-esteem in her daughters by being the role model for this power-pose.”

Judi went into more detail, saying: “There are no signs of the kind of desire to self-diminish shyly that you can often get when the arms are at the sides, i.e. a pulling of the arms into the sides of the torso.

“Instead the three women display the important ‘upturned V’ gap under the armpits that, along with a slight splaying of the feet, suggests admirable levels of confidence.” 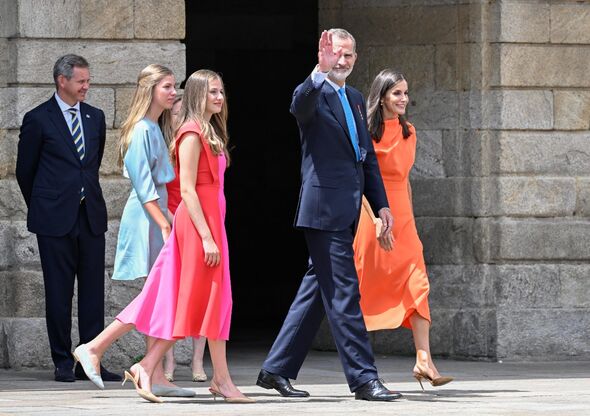 Letizia and her two daughters looked gorgeous in eye-catching dresses on Monday.

The Spanish Queen wore a bright orange midi dress from Vogana, which she combined wth a pair of Carolina Herrera brown stilettos. 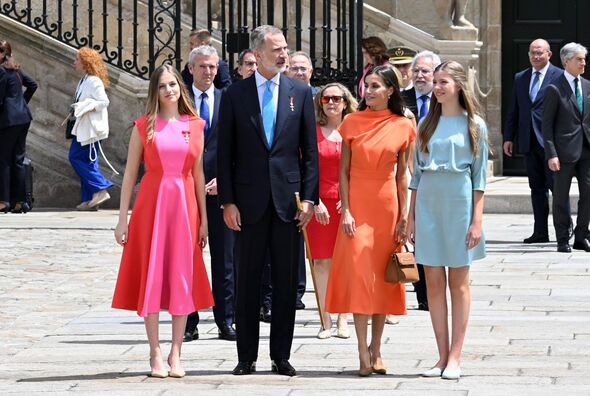 Princess Leonor donned a two-tone red and pink dress, which she pulled off well despite the clashing hues.

Meanwhile, Sofia wore a baby blue dress with three-quarter sleeves and a skirt that reached just above her knees.

Leonor’s dress was a little longer, resting just above her shins.

Both Princesses’ locks lay in golden waves over their shoulders, while their mother’s hair was also down, in a casual do.