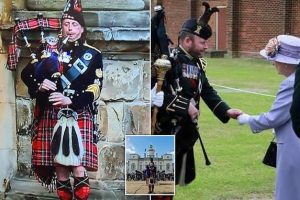 From starting the Queen’s day… to accompanying her final moments: The crucial role of the Sovereign’s Piper revealed as it emerges his lament will play out in St George’s Chapel

The final sound as the Queen’s body is lowered from view into St George’s Chapel’s vault during her committal service on Monday will be a lone piper’s moving lament.

Pipe Major Paul Burns, of The Royal Regiment of Scotland, will play one last time for Her Majesty, first bringing the funeral service at Westminster Abbey to a close, before playing out the monarch as she is interred by Prince Philip in the King George VI Memorial Chapel.

The role of the royal piper, also called the Queen’s piper, is considered one of the most prestigious for pipers in the Armed Services.

Among the duties of piper, who is the only non-royal allowed to wear Balmoral tartan, he plays for the monarch for 15 minutes every morning.

Whether she was at Windsor Castle, Buckingham Palace, Holyroodhouse or Balmoral, Pipe Major Paul Burns played for the Queen daily, standing underneath her window. 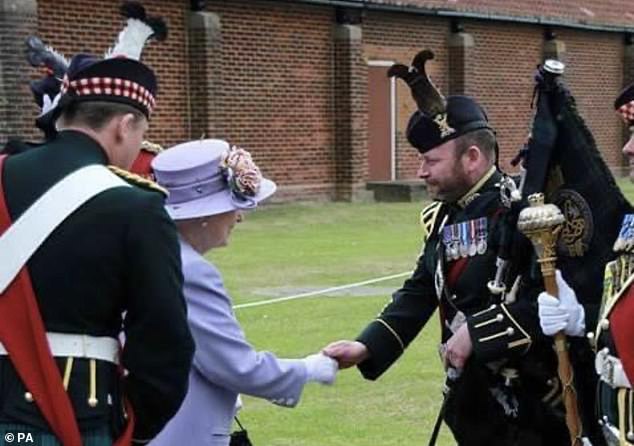 The Queen shakes hands with a former Queen’s piper, Pipe Major Scott Methven from the Royal Regiment of Scotland, who performed the role between 2015 and 2019

The current Queen’s piper, Pipe Major Paul Burns (pictured) will play the final lament as Her Majesty’s coffin is lowered into the vault at Windsor during her committal service on Monday 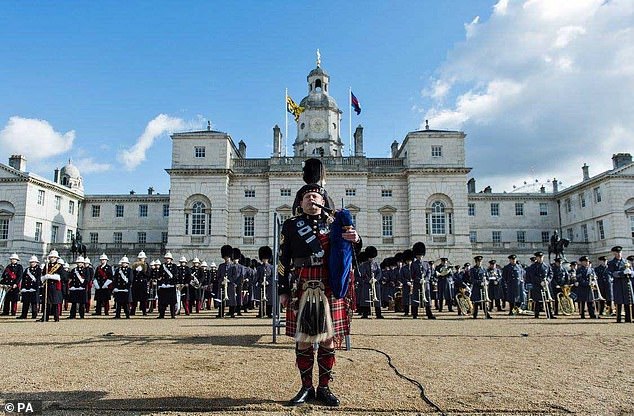 Pipe Major Scott Methven (pictured) who was the Queen’s piper between 2015 and 2019, says Pipe Major Paul Burns will do a ‘fantastic job’ when he plays for the Queen for the final time at her funeral service next week

The role was created in 1843 by Queen Victoria, after she enjoyed the sound of the bagpipes while on holiday in the Highlands for the first time.

She and Prince Albert were staying at Taymouth Castle with the Marquess of Breadalbane.

He had his own personal piper, an idea which pleased Queen Victoria, who wrote to her mother: ‘We have heard nothing but bagpipes since we have been in the beautiful Highlands and I have become so fond of it that I mean to have a piper, who can if you like it, pipe every night at Frogmore.’

Last Sunday, he playing her coffin, which was draped with the Royal Standard of Scotland and topped with a wreath, out of the Balmoral estate as it began its six-hour trip to Edinburgh.

A former piper, Pipe Major Scott Methven, 48, who was the 15th Queen’s Piper since 1873, says the current piper will do a ‘fantastic job’ when he performs at the funeral and committal service on Monday.

He described Pipe Major Paul Burns as ‘a cracking piper and a good man’.

‘Last night I spoke to the Queen’s Piper to give some advice and I was happy to give it, it’s nice that people still get in touch with you but everybody’s obviously devastated,’ he added. 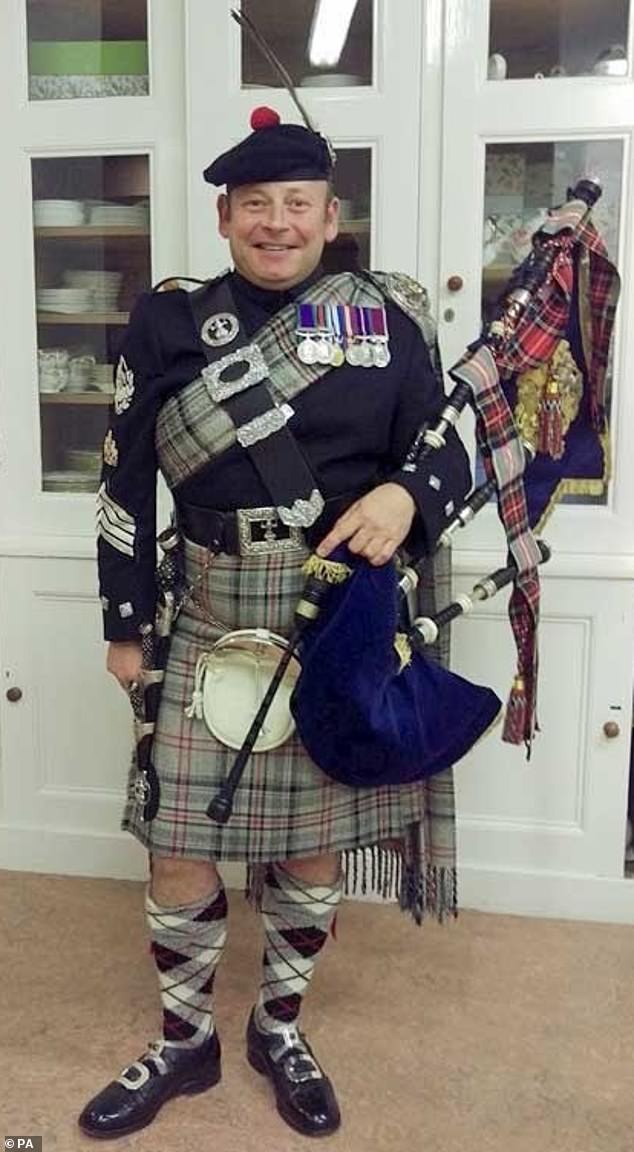 Former royal piper Scott Methven has shared fascinating insights into the role, opening up about the relationship he enjoyed with the Queen

‘He played out the ballroom, the six ghillies carried the coffin and he will be playing at St Giles’ tomorrow.

‘He will be the Piper playing down at the service in London and also when Her Majesty goes to Windsor Castle into the chapel he will play the pipes for that as well.

‘So he’ll be very much front and centre for this. Pipe Major Paul Burns is a cracking piper and a good man, he will do a fantastic job.’

Mr Methven, who left the Army after 25 years in 2019 and now teaches the bagpipes, also gave some insight into the role, opening up about the jokes he shared with Her Majesty when he was her piper.

Once, he revealed, the Queen, who was famously petite at around 5ft 3ins, joked about Mr Methven’s height. 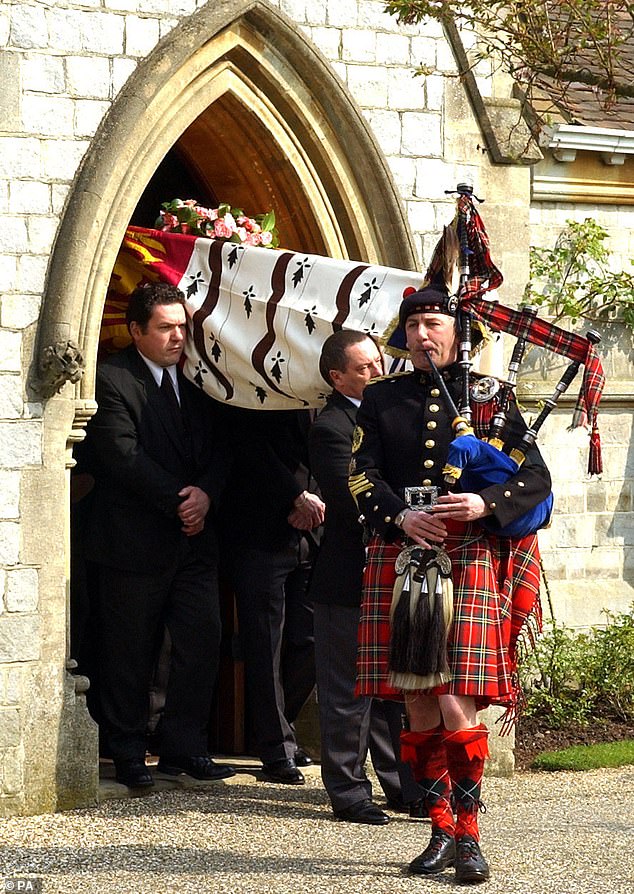 Former Queen’s piper Jim Motherwell is pictured in 2002, playing out the Queen Mother’s coffin as it is carried out of the Royal Chapel of All Saints in Windsor Great Park

He said: ‘She once joked that I was the first piper to hold the post whom she didn’t have to look up to – a jibe at my 5ft 6in height.’

And according to Mr Methven, he would have a ‘good laugh’ with the royal family in Balmoral, sharing some more details about the role of the royal piper.

He said: ‘I remember one night, it was just the Queen, the Duke of Edinburgh, and several other members of the family.

‘The invited guests hadn’t arrived so I said I would mix it up and I did movies on the bagpipes.

‘I would go around the tables and it would be like Top Gun and the Prince of Wales (now King Charles) had asked if I could do AC/DC Thunderstruck.’