Home » Lifestyle » Quit the moralising, HBO’s Euphoria isn’t pretty but neither is being a teen

Quit the moralising, HBO’s Euphoria isn’t pretty but neither is being a teen 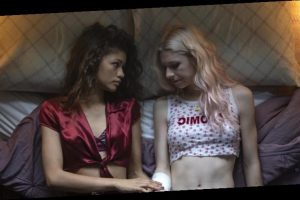 For as long as there have been teenagers, there have been stories about them on screen that lead to moralising and outrage. As time has gone on, the teenage tales told on film – from Rebel Without a Cause and The Breakfast Club to Dazed and Confused and Kids – took on increasingly gritty tones and presented unvarnished versions of life in and out of high school hallways.

As TV screenwriters followed suit, mining their own histories for inspiration, the scope of stories broadened and the time viewers spent with key characters could grow. 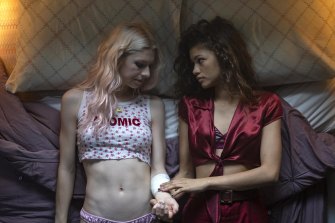 Hunter Schafer and Zendaya in the HBO series Euphoria.Credit:HBO

Euphoria, the Emmy Award-winning, highly stylised HBO drama that debuted last June and a special episode of which dropped this month, is both indebted to the canon of teen dramas and carving new territory of its own.

Zendaya stars in the series as Rue, a teenager addicted to narcotics – a story that parallels series creator Sam Levinson’s own life. Serving as narrator, 17-year-old Rue introduces herself in the pilot as a kind of unwilling participant in the world. Behavioural issues as a kid saw doctors scribble prescriptions for sedatives. She’s not getting high between Narcotics Anonymous meetings – which are mandatory after an overdose sends her to rehab – for fun but rather because she doesn’t know any other way to be.

“I didn’t build this system, nor did I f— it up,” Rue intones over footage of herself and her classmates cross-legged on the floor of a dark classroom, as the school runs through an active shooter drill. She was born the week of 9/11 and knew cyber-bullies long before she’d encountered a real-life version. She is Girl, Interrupted, but with Instagram.

Euphoria caused inevitable controversy when it premiered. But between the drug use, no-holds-barred footage of naked bodies of all sizes and genders, and depictions of sex – whether between teens or with older partners, met at parties or on hook-up apps – Euphoria is largely just giving voice and screen time to the same predilections in which teens on TV have always partaken – but with the unfiltered lens that HBO production (and an MA15+ rating here in Australia) offer. 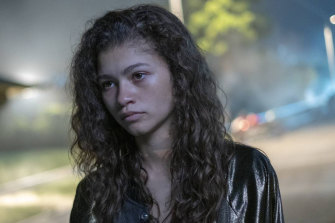 Zendaya as the troubled Roo in Euphoria.

First came Degrassi in the late 1980s. With teen characters played by actual teenagers (a rare occurrence in the genre), it dealt with drugs, relationships, pregnancy and disability. Degrassi was wholesome, a life lesson served up on a screen, but for all its fun it was about capital-I issues first and foremost.

By the early 2000s – as the first of many Degrassi reboots began airing – the teens in Orange County took a soapier approach. Starring Mischa Barton as the disaffected party girl putting on an increasingly flimsy clean-cut costume, The O.C. was pre-recession escapism. The house parties might’ve always ended in fights, fires or overdoses, but they looked great – something Euphoria actively avoids. Rue isn’t popping pills to be the life of the party; she’s beating down her drug dealer’s door because she can’t exist if her brain is noisy and active. 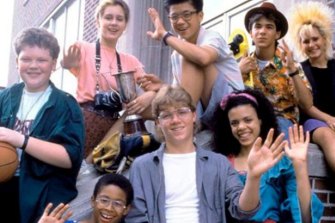 In that vein came the true blueprint for Euphoria. Released in 2007, the same year The O.C. ended, Skins was created by 22-year-old Jamie Brittain and his father, Bryan Elsley. Let loose by parents with no time or interest to care for them properly, the core cast of Skins fell in love with (and cheated on) one another, dropped out of school, got pregnant, chewed their faces off at underage raves, experimented with their sexualities and attempted suicide.

There was no neat ending or hand-holding resolution in Skins. Its creators, like Levinson, knew that teenagers are inherently repulsed by media that tries to teach them lessons, so the Degrassi model was never going to work. But they also knew their audience was not unwilling to listen and absorb if they had something or someone to relate to.

Last week, HBO released Trouble Don’t Always Last, the first of two special Euphoria episodes designed to bridge the finale of season one and the second season next year.

These specials are laser-focused on character. The second will focus on Jules (Hunter Schaefer), who we last saw farewelling Rue on a train platform, their spontaneous plan to run away to “the city” together splitting like an atom when Rue got cold feet and stayed behind. 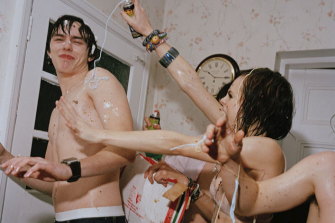 Following that farewell, Rue relapsed. Her reason for staying clean had just ridden away on a train, so she said goodbye to sobriety too.

Shot during COVID-19 restrictions, the episode takes the form of an hour-long conversation between Rue and her sponsor, Ali (Colman Domingo), in which Rue’s mask – the one that lets her survive her days believing none of the actions she takes really matter in the long run – slowly slips away. Domingo, a stage veteran, is brilliant in this exchange, while Zendaya shows why she beat out Jennifer Aniston, Olivia Colman, Jodie Comer, Laura Linney and Sandra Oh for Outstanding Lead Actress in a Drama Series at the recent virtual Emmys.

Teen dramas of the past depicted people looking for ways to escape and disconnect. On Euphoria, we’re asked to reckon with the reality of a world so connected there is no escape. One character loses her virginity and soon after a video of the act circulates online. Another is cat-fished by a violent classmate who uses the intimate photos they traded back and forth for blackmail. 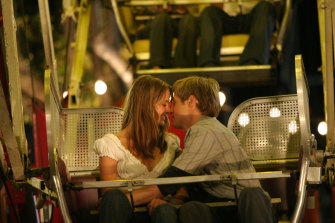 Mischa Barton and Benjamin McKenzie in The O.C.

The signature make-up look of the show – one that’s been replicated endlessly in the past year – is a smear of glitter under the actress’s eyes. In certain light and certain scenes, it can be hard to differentiate between glitter and tears. But there’s no mistaking the emotion spilling from Rue’s face when she attempts to answer Ali’s question about how she wants her mother and little sister to remember her when she’s gone.

Sofia Coppola’s 1999 adaptation of The Virgin Suicides painted a picture of the darkness lurking behind teen girls’ bedroom doors, girls told they were too young to understand how bad life can be. But teens on screen – and in reality – knew then and they know now.

The moralising about Euphoria – like that surrounding all teen shows before it – is not surprising, especially when the contents are truly horrifying. But here the horror comes from watching someone so young be so weary, broken and without hope. It’s ultimately a story built upon a foundation of addiction, recovery and relapse. Watching Rue treat that as either quicksand or stable ground to launch from isn’t pretty, but neither is being a teenager.

Euphoria is on Binge, with the second of two special episodes to be released on January 24.

END_OF_DOCUMENT_TOKEN_TO_BE_REPLACED

END_OF_DOCUMENT_TOKEN_TO_BE_REPLACED
We and our partners use cookies on this site to improve our service, perform analytics, personalize advertising, measure advertising performance, and remember website preferences.Ok