Race Across the World: Tensions rise as teams try to reach Azerbaijan

‘You’re in Turkey, not England!’ Father-and-son on BBC2 show Race Across the World get jobs with a VERY bad-tempered art dealer in Ankara – as they continue their bid to reach Singapore

The competition ramps up and tempers start to fray in this Sunday’s episode of Race Across the World, BBC Two’s new global travel series.

This week the pressure is on as the last team to arrive in Baku, the capital of Azerbaijan, will be eliminated from the competition.

The goal is to make it to Singapore without taking a single flight. Teams of two had to leave behind smartphones, internet access and credit cards behind and are armed with only the cash equivalent of a one-way airfare to Singapore.

Each week, the teams make their way to a given check point, before they continue on their way to final destination Singapore. Every pair can decide on their own itinerary and how to handle their budget.

As the show unfolds this week unemployed 20-year old Alex, from Bradford, is put to work in order to bag some cash as his two-man team waits to travel to their next check point. 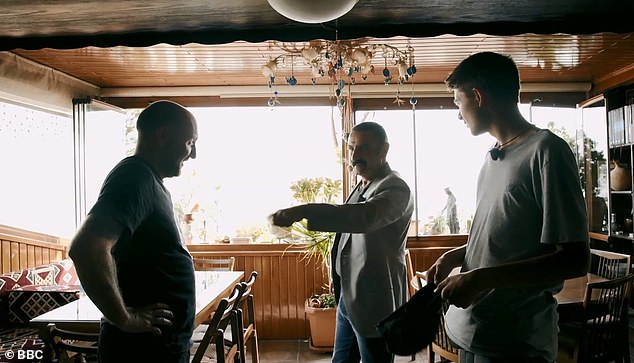 Get on with it! Father-and-son duo from Bradford, Darron and Alex, earn some money working for a bossy local art dealer in Turkey. The task proves too much for Alex, who is used to taking the easy option

Last week’s launch saw the five teams reach the first checkpoint of Delphi and now they must make it to Baku, a two-thousand-mile journey out of Greece, across the lengths of Turkey and Georgia, and into Azerbaijan.

Money is running out fast and father and son Darron and Alex make the most of their spare time waiting for their next mode of transport in Ankara, Turkey to earn some money before they head across the country, towards Tbilisi.

Working for a local art dealer, the father and son are put straight to work, lifting and carrying artwork for the owner Mr Terzioğlu.

Darron remarks that Mr Terzioğlu is a tough boss shouting and ordering Alex about. ‘I like it. I’m just surprised Alex is listening.’ 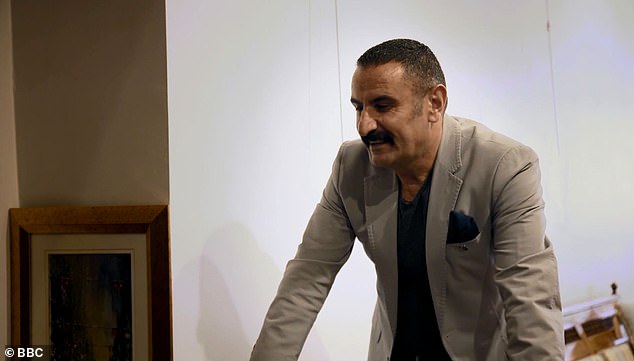 The owner of the art shop, Mr Terzioğlu, makes sure to let Alex know ‘this is not England, this is Turkey’ while the duo lift and carry the heavy artwork as he looks on 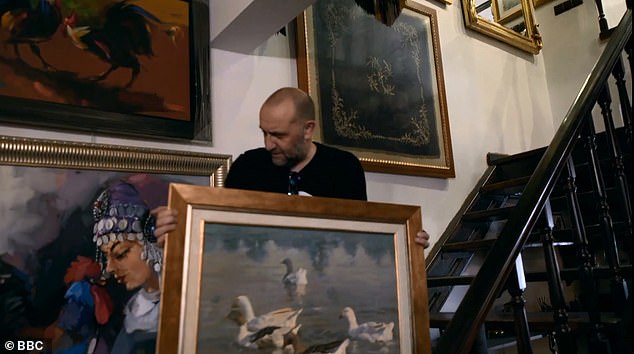 Darron does not mind being ordered around and gets to work quickly, but he is suprised his son Alex is listening to the art dealer’s orders 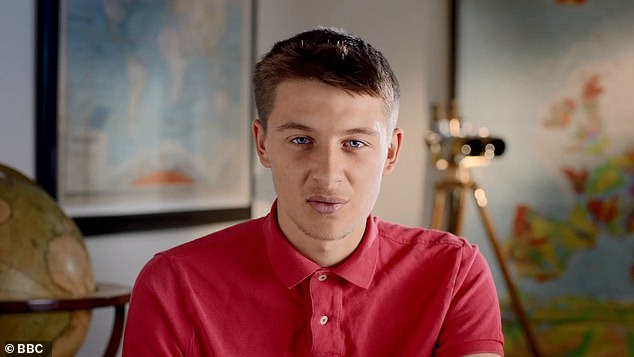 Alex’s first job experience in Turkey is not all smooth sailing, as the young man gets increasingly annoyed at Mr Terzioğlu 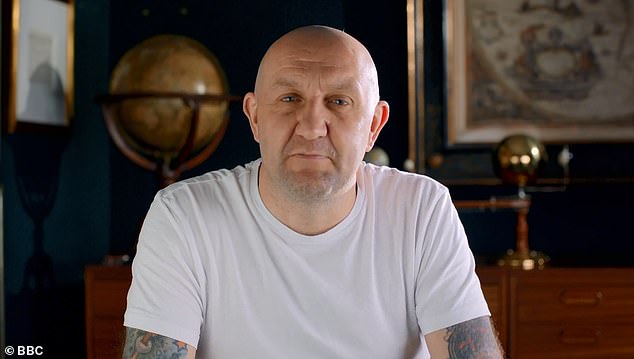 Father Darron explains one of his personal challenges is to step back and let Alex experience things for himself. ‘I’m going to try and let Alex do as much as he can because he will benefit,’ he says

Alex has never had a career plan, he’s been to hundreds of job interviews with no success. He says: ‘This trip is about proving to myself that I can do something. I can properly get out of my comfort zone.’

However, his first experience of a job in Turkey is not plain sailing – the boss is quick to remind Alex that ‘this is not England, this is Turkish.’

And when Mr Terzioğlu asks Alex to get ‘two teas,’ one for him and one for Alex’s Dad, Darron, Alex asks if he can have one too, but ‘no drink’ is the reply.

Darron goes on to explain that Alex has got himself into a bit of a rut by always taking the easy option. ‘One of the challenges is for me to step back and go, “no Alex you need to do this,” and I’m going to try and let Alex do as much as he can because he will benefit.’

However, Alex doesn’t seem to agree, becoming increasingly angry at the situation as he’s made to mop the floor whilst his dad and the gallery owner enjoy their tea, ‘he’s p***ing me off man, this is a joke, I’ve asked for a drink and I can’t even get a drink, are you mad?’ 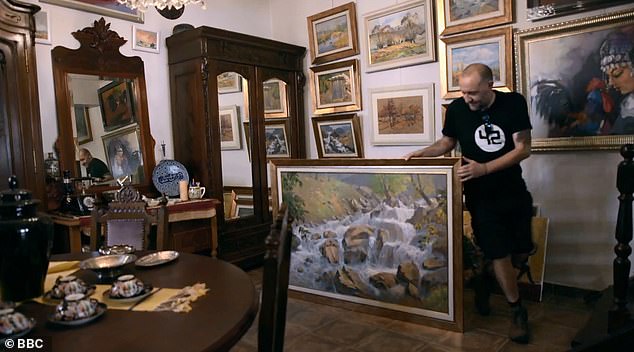 In this week’s episode, racers have to make it Azerbajian from Greece by way of Turkey and Georgia: A two-thousand-mile journey 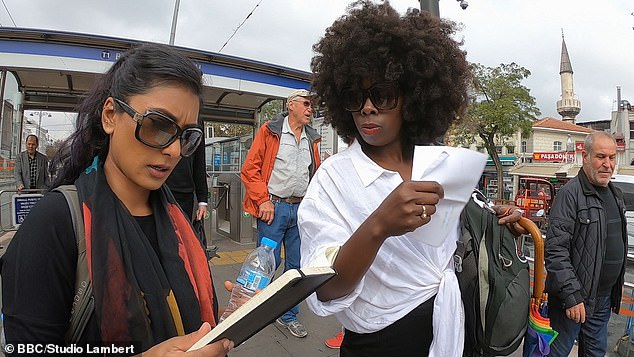 Everyone is left to fend for themselves in this week’s episode as duos struggle to keep their budget in check. Like Darron and Alex, many competitors have to work for locals in order to make some cash.

Best friends Natalie and Shameema leave Delphi with 72 percent of their budget. The pair had planned to take the last train to Thessaloniki and then to Istanbul. But things get tricky when they fall short of the correct fare. The pair has British pounds, but no euros left.

The two women make the risky bet of boarding the train having paid for only half of the journey and eventually encounter an officer in the train in the middle of the night.

Meanwhile, winning duo from last week Josh and Felix start with a comfortable advance on the competition. Confident in their ranking, the two take place on an Eastern Express train to Kars, Turkey, from Ankarra. 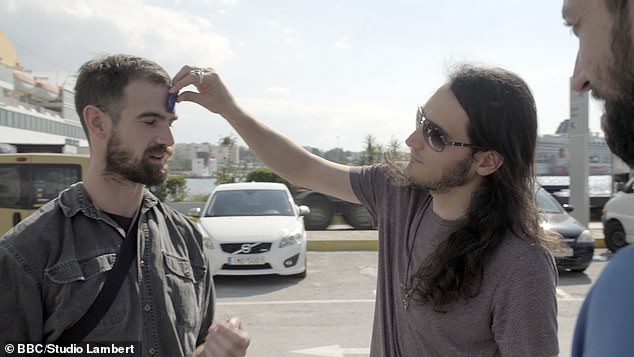 Last week’s winning pair, Josh and Felix are off to a good start when they meet with a mystic in Delphi who agrees to drive them to the bus station. But will their good luck survive their slow train journey to Kars, Turkey? 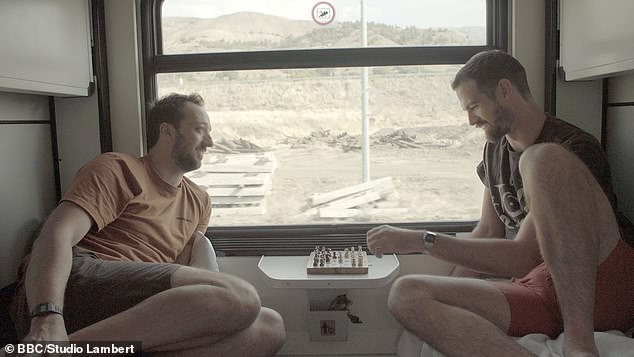 Josh and Felix can do nothing but wait – and play chess – while the ‘Express’ slowly makes its way through the 11 stops separating Ankara from Kars, located near the frontier with Georgia 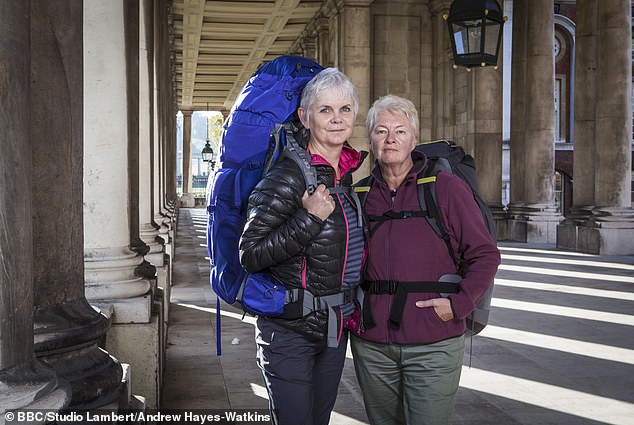 Darron and Alex are on the same train after having spent some time working in the art gallery.

Unbeknown to them all, the ‘express’ is actually very slow, with an estimated journey time of 24h and rarely runs on schedule.

As the episode starts, the threat of elimination haunts fifty-seven-year-old Sue. Her late father was stationed with the RAF in Singapore and, wanting to retrace his footprints, she’s desperate not to fall short.

‘We can’t afford to make any mistake this time, can we?’ said Clare.

The situation is even more stressful for the pair, who came in forth place last week, as competing duo Tony and Elaine are only 5 minutes behind them.

The two competing teams engage is an heart-racing taxi chase in the streets of Thessaloniki. 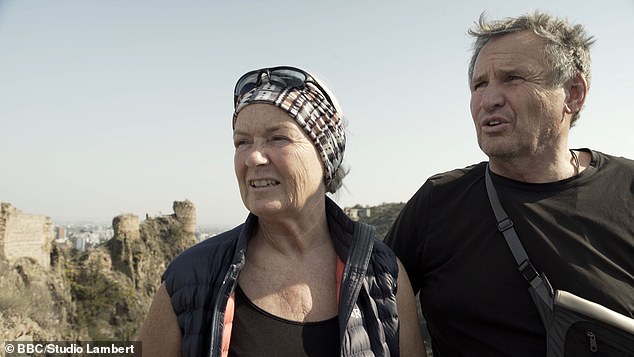 Elaine and husband Tony, retired teachers who’ve been married for 40 years, start the episode last and yet put pressure on all the other teams. They spent an afternoon sightseeing in Tbilisi,

Tony and Elaine were the last team to make it to the first checkpoint, which means they are the last to leave Delphi in this week’s episode.

The couple manage to make an impressive return and thanks to their bus journey, they are the first to make it to Tbilisi, Georgia, leading the race before Josh and Felix and Darron and Alex. But there’s still a long way to go before Azerbaijan.

Teammates set their hearts racing as they all finally arrive in Baku and one team sees its time on the show cut short.

‘When the going gets tough, me and Tony get going,’ said Elaine.

Race across the World airs tonight on BBC2.