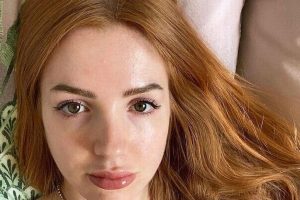 Up until the age of 17, Scarlett Jones believed she would only lose her virginity after getting married.

But skip on a few short years and she is now a popular adult entertainer who “effortlessly” pockets £7,000 selling racy pics on OnlyFans.

Here we take a look inside her racy life to gain an insight into why she ditched church for strip clubs.

Speaking to Daily Star earlier this year, Scarlett offered a glimpse into her younger self.

“I went to church every single week,” she said. “I was deeply religious until I was about 17. I was fully of the belief I would wait for marriage before I had sex.”

Explaining what changed, she considered: “I did my A-Levels and studied philosophy and that opened my eyes to different things. And for two years I took my clothes off for money.”

But before she began stripping off for cash in her early 20s, Scarlett continued making her religious parents proud in her latter teenage years.

This was emphasised when she was accepted to study law at the University of Sheffield.

But Scarlett suggested that decision was not entirely her own.

“To be honest my parents chose I should do something like that and have a good career, something respectable and proper,” she said.

“So my parents chose it but I was also interested in it in general and thought it would be a good career choice.

“Deep down I thought it wasn’t for me but I didn’t really know what choice I had. It’s difficult to choose a career, especially at 18.”

Despite her doubts, Scarlett completed the three year course.

But between studies, the stunning redhead began exploring her sexual side, and soon learned she could earn big from it.

Her first venture into sex work was shifting at a strip club in Sheffield while studying.

“Me and my friends had just been to Amsterdam, and we went to see a sex show and a striptease show while we were there, and I was just enamoured.

“It’s for a lot of women, I think kind of a stop-gap, kind of something to help fund you while you’re at university, and originally it was that for me as well.”

She later added in a separate interview: “Perhaps because I had strict parents it was a way of rebelling at first but I also genuinely did enjoy it, the strip club was such a laugh and a fun environment to be in.”

But days before her graduation ceremony, her parents learned how Scarlett had been making money.

Disgusted, they refused to attend their daughter’s big day.

Recalling the experience, Scarlett told Daily Star: “My parents were really shocked when they found out and they did not react well.

“They didn’t come and they didn’t speak to me for over half a year. They literally blocked me out of their lives which is insane."

She added: “They then found out how much money I was making and suddenly they were interested again…

“It’s not very nice but that’s what happened. People are strange sometimes but I guess I still have my law degree.”

Working in the strip club eventually led to a three-year stint at Babestation where she worked on racy night time calls.

Previously she opened up about her barmiest callers – including a man who begged to be stabbed.

She said: “I was really surprised penis sizes were not bigger. You have this misconception of what it will be but it’s not like that and it is very different to how you would imagine.

"It is not quite as extreme and I guess camera angles make them look bigger.”

“My first scene was on a pool table which was so uncomfortable, bizarre and so far from reality.”

She managed to buy her first home aged 21 and the now 25-year-old continues to live a life of luxury.

She said some fans will tip her thousands simply by sipping Prosecco from her bedroom.

And as for her current relationship with her parents, she added: “[My career] is not something we really talk about. It’s one of those things where you pretend it’s not happening but it does feel like a double standard.

“People are more than happy to accept generosity from me but obviously they don’t want to know where their money has come from.

And with her money she is now living a life she once could never have envisaged.

“Before sex work I would never have been able to just spend five days with my grandad and take him out and go to restaurants without worrying,” she said.

“Being able to provide for people is so important to me and knowing I can support my family is amazing.”

She now travels the world with her flights and accommodation paid for by fans who have followed her career since Babestation.

And rather than take her lifestyle for granted, Scarlett said: “All the time I shake myself and feel that this is amazing to be paid for this.

“I also really do appreciate it. I don’t think ‘oh I deserve this’.

For more lifestyle stories, sign up to the free Hot Topics newsletter here.