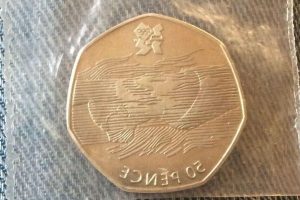 A RARE 50p error coin has sold for £420 on eBay – hundreds of pounds more than its face value.

The coin is already considered rare as it is one of the 29 designs created especially for the 2012 Olympic games.

It depicts the image of a swimmer, but this particular copy has its own little twist that has pushed up the resell value so high.

The 50p features an error across the design which wasn't supposed to have been included in the final version released in 2011.

The Royal Mint had redesigned the 50p to have fewer water lines crossing the swimmer's face, but some versions, like the £420 one, still sport this difference.

It's thought around 600 are in circulation, which explains why collectors are willing to pay steeper prices to get their hands on a copy.

But the rare error version is harder to come across which is a more popular trait.

It's not the highest we've found a coin similar to this going for though, as back in March a similar fault led one coin to be snapped up for a cool £1,000 on eBay.

Other rare coins have come close to the high value too, as one rare £1 coin with a minting error was snapped up for £410 after 20 bids from eager coin collectors earlier in the year.

The recent one that sold for £420 racked up 26 bids though, before closing on July 8.

Five different bidders were after the coin which started off at auction for £50.

The number of bids on the listing can help you establish that the coin is the real deal, and something worth bidding on if you're in the market for rare coins yourself.

It's not just rare coins that can go for a few bob either, as we found a rare Brexit 50p sold for £750 on eBay just because of its design too.

You might find a rare coin of your own in your change, whether it be an error or one that has been specially curated.

If it makes its way into your wallet, try listing it on a site like eBay as you could potentially see a large return.

You can also ask the Royal Mint to take a look and see if it's real.

Then you'll be able to up the resale value if potential buyers are aware that it's officially recognised.

But be careful not to come across a fakes as these obviously won't be worth as much.

You can compare other rare coins on eBay to see how much they have sold for as reference, and use online tools from change experts like Coin Hunter to see how much it could be worth too.

Remember, if you're selling on eBay then you need to keep in mind that a buyer could pull out so it can be harder to verify if coins have sold for the value they say they have.