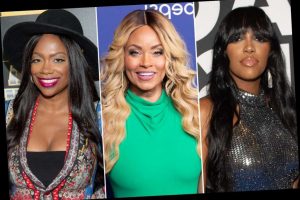 Some “Real Housewives” are getting real.

George Floyd’s death in police custody sparked protests around the world, and several celebrities have been moved to speak up for the Black Lives Matter movement and victims of police brutality. “Real Housewives of Atlanta” stars Porsha Williams and Kandi Burruss, along with Gizelle Bryant of “Real Housewives of Potomac,” are the latest to join the chorus, speaking out to Daily Pop’s Justin Sylvester on Bravo’s “Amplify Our Voices.”

Williams — whose grandfather Hosea Williams was a civil rights activist who marched alongside Dr. Martin Luther King, Jr.  — recently prayed over a crowd of Atlanta protestors, and she told Sylvester that she felt obligated to speak out as a black woman who has been confronted with prejudice herself.

“My first thought was, ‘Oh my God. I can’t just stay at home, I can’t just be still, I have to do something.’ When I saw that everybody was down at Centennial Park, I was like, you know what? That’s exactly what I’m going to do. I’m going to go and at least be with the people, hear what they’re saying, you know? Push their message even higher.”

Bryant’s family was also involved in the Civil Rights Movement, and she has been sure to pass down that legacy to daughters Grace, Angel and Adore. She also showed appreciation for BLM allies who have been fighting for the cause.

“The protest that my kids made me go to, it was 90 percent white. It was organized by teenagers. It was about 3,000 people there. It was amazing, and to see this organized by white, young, mostly girls gave me hope. It gave me inspiration.”

Burruss also showed love to those who have taken up the cause globally, while also challenging corporations to put their board seats where their mouth is.

“Right now, I feel like there are a lot of companies out there that have been making big donations, which is obviously wonderful and we’re thankful towards them … obviously, we need money to fund programs, to fund reform, to keep a legal team on this thing to keep it going, right? But, I also want to see … what’s the diversity in your executive staff?” Burruss inquired. “Those are the things I want to see us start talking about.”