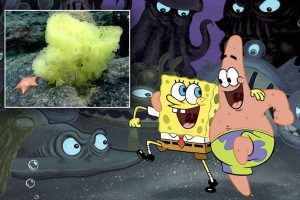 How 4-year-old accidentally bought $2.6K worth of Popsicles on Amazon

Slime-filled NFL playoff game on Nickelodeon is a hit

Marine scientists may have discovered the hidden location of SpongeBob SquarePants’ underwater Bikini Bottom home just 200 miles off the coast of New York.

Divers recently spotted a yellow sea sponge and a pink sea star — doppelgängers for SpongeBob and his doltish pal, Patrick Star — hanging out on a rock at the Retriever Seamount in the Atlantic Ocean.

A team of researchers from NOAA’s Okeanos Explorer ship found the aquatic allies — a Hertwigia sponge and Chondraster starfish — while surveying the seamount aboard remotely operated vehicles (ROVs).

Talking to Insider, Mah said of the serendipitous discovery, “‘I thought it would be funny to make the comparison, which for once was actually kind of comparable to the iconic images/colors of the cartoon characters.”

But he noted that the bright colors of the popular cartoon characters are more exaggerated than those of the real-life species. “As a biologist who specializes in sea stars, most depictions of Patrick and Spongebob are incorrect,” he added.

“You just know they were cutting it up right before the camera came… they were like FREEZE,” said one fan.