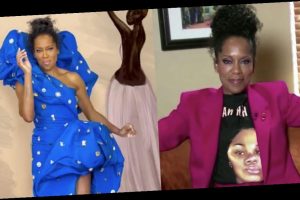 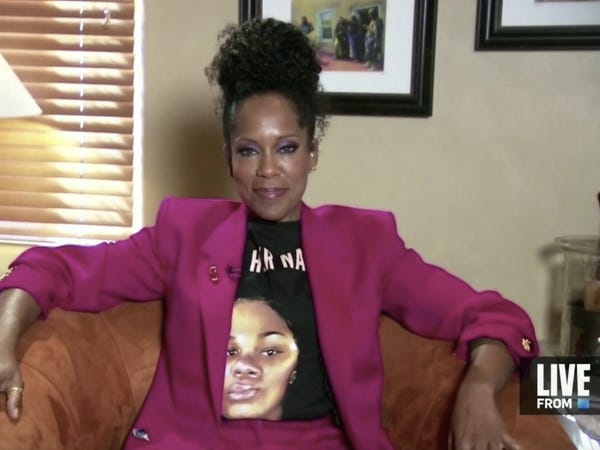 Regina King found a way to serve two looks at the 2020 Emmys, bringing both couture and activism to the virtual ceremony on Sunday night.

King, who is nominated for her role in HBO's "Watchmen," appeared on the E! Emmys preshow sporting a magenta Schiaparelli suit and a Breonna Taylor shirt — which she wore backwards to show Taylor's face.

During the segment, King also shared footage from a photo shoot in which she donned the Schiaparelli Couture gown she would have worn had there had been a traditional Emmys red carpet.

The gorgeous blue gown was adorned with sparkling embellishments and a dramatic, asymmetrical neckline.

King previously posted an Instagram photo of herself wearing the shirt featuring Taylor, a 26-year-old EMT who was shot and killed by police in her own home in March.

The front of the shirt reads "Arrest The Cops Who Killed Breonna Taylor," while the back features an illustration of Taylor and the words "Say Her Name."

It’s been 150 days since Breonna Taylor was murdered in her sleep by Jonathan Mattingly, Brett Hankison, and Myles Cosgrove—and her killers have not been charged. Too often Black women who die from police violence are forgotten. Let’s stay loud, keep demanding justice for Breonna and her family, and SAY HER NAME. This campaign and t-shirt was created by @phenomenal in partnership with the Breonna Taylor Foundation, to which all profits will be donated. Click link in bio Art by @arlyn.garcia

King was among a number of celebrities who shared pictures of themselves in the shirt, which was designed by Phenomenal Woman in partnership with the Breonna Taylor Foundation.

All proceeds from the $45 shirt, which features an illustration by artist Arlyn Garcia, are directly donated to the foundation.

END_OF_DOCUMENT_TOKEN_TO_BE_REPLACED

END_OF_DOCUMENT_TOKEN_TO_BE_REPLACED
We and our partners use cookies on this site to improve our service, perform analytics, personalize advertising, measure advertising performance, and remember website preferences.Ok