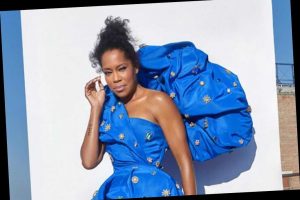 At the 2020 Emmys, Regina King’s performance in “Watchmen” earned her the Outstanding Actress in a Limited Series or TV Movie award, marking her fourth Emmy to date.

But King’s forearm tattoo — which at first glance appears to feature Hebrew symbols — also has fans buzzing on social media: Is she Jewish? What does it mean?

The illustration on her arm, which was visible in a pre-show photo of King in a Schiaparelli gown, is a three-letter Aramaic sequence which means “unconditional love,” King, 49, revealed during an appearance on “The View” in 2017.

She and her 24-year-old son Ian Alexander, Jr. have matching ones from when they studied Kabbalah, a 4,000-year-old Jewish mystical philosophy practiced by stars such as Madonna and Demi Moore.

“We were taking Kabbalah classes, and he said let’s choose three [phrases] each, and not tell each other which ones they are,” she explained. “And the one that’s matching, that’s the one we’re gonna get a tattoo [of]. And we both chose ‘unconditional love.’”

King also chose to make a statement with her Emmys look, donning a Breonna Taylor T-shirt under a pink power suit.

END_OF_DOCUMENT_TOKEN_TO_BE_REPLACED

END_OF_DOCUMENT_TOKEN_TO_BE_REPLACED
We and our partners use cookies on this site to improve our service, perform analytics, personalize advertising, measure advertising performance, and remember website preferences.Ok