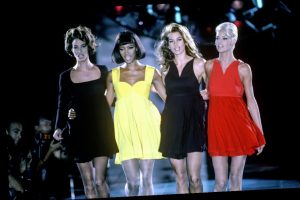 The decade that brought fashion to the masses is the subject of a new Rizzoli book and MFIT exhibition.

For those of us who have ever rented a VHS from Blockbuster, sported some over-tweezed brows, and can quote nearly every line from Clueless (“You don’t understand. This is an Alaïa…It’s, like, a totally important designer”), hearing that the ‘90s is now considered a “revival” era in fashion is a tough pill to swallow. Still, its return is a welcome one—the decade is responsible for some of the most formative years in fashion.

“It was a dynamic period in that there were a lot of styles,” says Colleen Hill, curator of costume and accessories at the Museum at the Fashion Institute of Technology. “There was something for everyone but it was also a time when people started to feel connected and more aware of what was happening in the fashion world.” In terms of trends, this looks something like high-waisted denim, bucket hats, mini skirts, Doc Martens, and fanny packs—pieces that have all found their way back into 21st-century wardrobes.

To honor the decade that redefined fashion and pop culture and highlight several key creatives who challenged the industry, Hill has curated an exhibition opening in autumn, “Reinvention and Restlessness: Fashion in the 90s,” accompanied by her new book of the same title, out next week.

The exhibit features some early runway pieces from Martin Margiela, including an early pair of his Tabi boots from the spring 1990 collection. Worn on the runway, the boots are made from a heavy canvas material covered in white paint, showing cracking and deterioration over time. Another highlight: the dot-print jumpsuits from Jean Paul Gaultier’s iconic “Max Max” fall 1995 collection. “We’ve been seeing so many people wearing 1990s Gaultier now,” says Hill. “It was fun to make the connection to what’s in fashion these days, as well.” Showing over seventy-five looks, the exhibition also includes archived looks from Alexander McQueen, Hussein Chalayan, Gucci, Calvin Klein, Helmut Lang, Prada, and many others.

There will also be film clips coinciding with the exhibition—from Clueless, House of Style, Robert Altman’s Prêt-à-Porter, Sex and The City, and more—acting as both direct connections to the garments displayed and relevant pop culture references.

Of both the exhibition and the book, Hill says, “What I’m hoping to underscore is that this was a particularly dynamic time in fashion, but I also think that it really sets the stage for the way that we think about fashion now. There’s a greater interest overall in what’s happening in the fashion industry because of the ’90s.” Below, get a sneak peek at some of the images included in the book, plus looks from the exhibition.

Gwyneth Paltrow and Brad Pitt, both in peak ’90s looks.

The back detail of an Ann Demeulemeester fall 1996 ensemble.