Restaurant staff use ‘secret codes’ to say if customers are nice 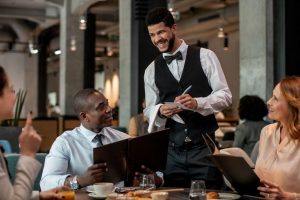 Actor and TV presenter James Corden was banned from a restaurant after it was claimed he was the "most abusive customer" ever.

Balthazar restaurant, in New York City, told the talk show host he wasn't welcome to return because he was so disrespectful towards staff.

Restaurant owner Kevin McNally posted about the incident on social media, where he said Corden was a "hugely gifted comedian, but a tiny cretin of a man", and told followers how the actor's behaviour on two occasions led him to banning him from the establishment.

In the brutal post, he said he'd "86'd Corden", which – if you've spent some time watching Ramsay's Kitchen Nightmares – you'll know is a subtle restaurant code.

The term "86" was often yelled on the show, and would be shouted at times when Ramsay realised certain ingredients of a dish had been left out for a long period of time.

They'd often been left out for so long that mould would start growing on them.

It's usually used to refer to the fact that the restaurant has run out of an important ingredient but, in the case of Corden, it was the TV host himself who ended up getting "86'd."

Eateries have various other codes they use to communicate in secret, and they usually use the terms to talk about what sort of customers they are dealing with at different tables.

When you're eating out, if you hear a staff member calling you a "PX" then you can chill, as this means the customer is a "person extraordinaire."

In other words, they think you're going to spend a lot of cash, so they're likely to treat you well.

Some other terms they use include "VIP", which is pretty self explanatory, and "BLR" is used to represent baller.

Meanwhile, if you're a super spender who is known to return to the restaurant time after time then you may even be labelled a "PPX", which means a "person particulièrement extraordinaire."

If you know the owner, you may be referred to as an "F/O", otherwise known as "friend with owner", and if they think you're the type who will make a complaint they'll dub you a "HWC", which means to handle with care.

The big one to avoid is being 86'd because if staff are using the term to refer to you then you need to be prepared to make a big apology or find somewhere else to eat.

Meanwhile, the customers who staff really like could be referred to as "Never Refuse", which means they'll always manage to find a spot to squeeze you in.

It's important to note that codes are different in different countries, as they can develop in all sorts of ways, but The Guardian discovered particular terms that are often used in British restaurants.

Be weary if you ever hear someone refer to you as a "HAF", as it highlights that you've "had a few", and implies your table could become a bit worse for wear.

But, it's probably better to be called that as opposed to a "PIA", which means you're a "pain in the a**e."

As for Corden, who most of us know as Smithy in Gavin & Stacey, he was able to get his ban lifted after issuing a massive apology to the staff.

The Balthazar owner then shared a joke, and said he expected to host The Late Late Show for a few months to make up for it.