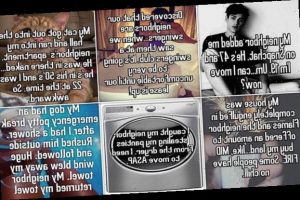 Time to move house? People reveal the VERY awkward moments they’ve had with their neighbours – including one an embarrassing noise complaint after a night of passion

While an awkward moment is excruciating enough, it’s ten times worse when it’s with someone you have to see every day.

People from across the globe have revealed some of their most embarrassing encounters with those who live next door.

Among the amusing anecdotes, collated online by the secret sharing site Whisper, include one whose towel fell down in front of her neighbour, and another who met hers for the first time in the lift – a day after receiving a noise complaint following a night of passion.

Elsewhere, a 19-year-old was horrified to discover her 47-year-old neighbour had added her on Snapchat. 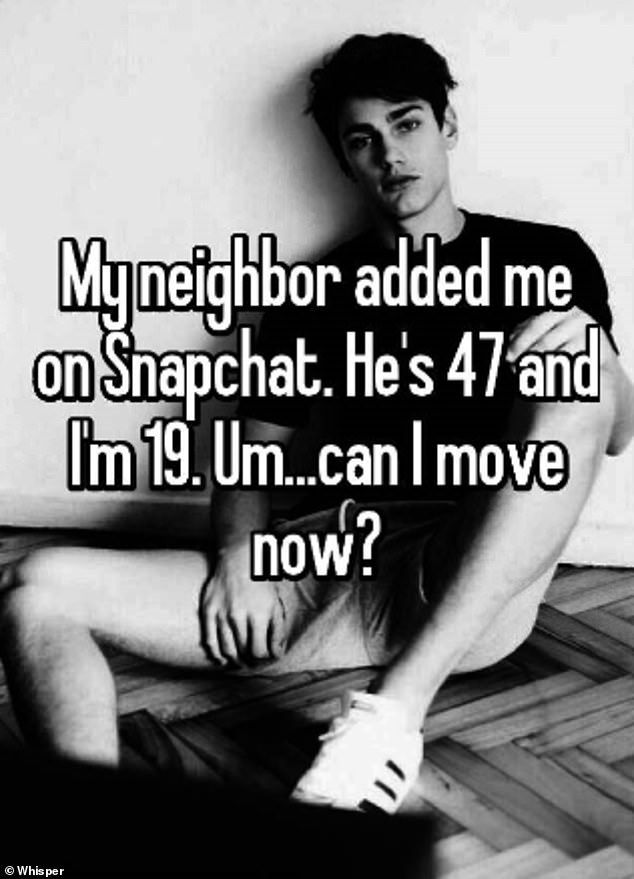 Friend request denied! A 19-year-old, from California, told how she was horrified to discover her 47-year-old neighbour had added her on Snapchat 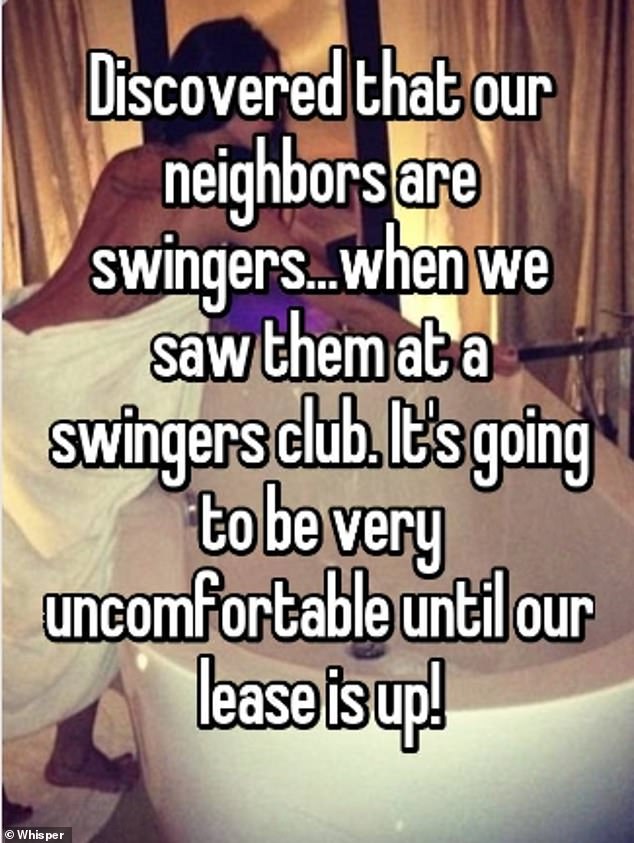 Swing into action! One woman, from the US, wasn’t expecting to see her neighbour down the local swingers club 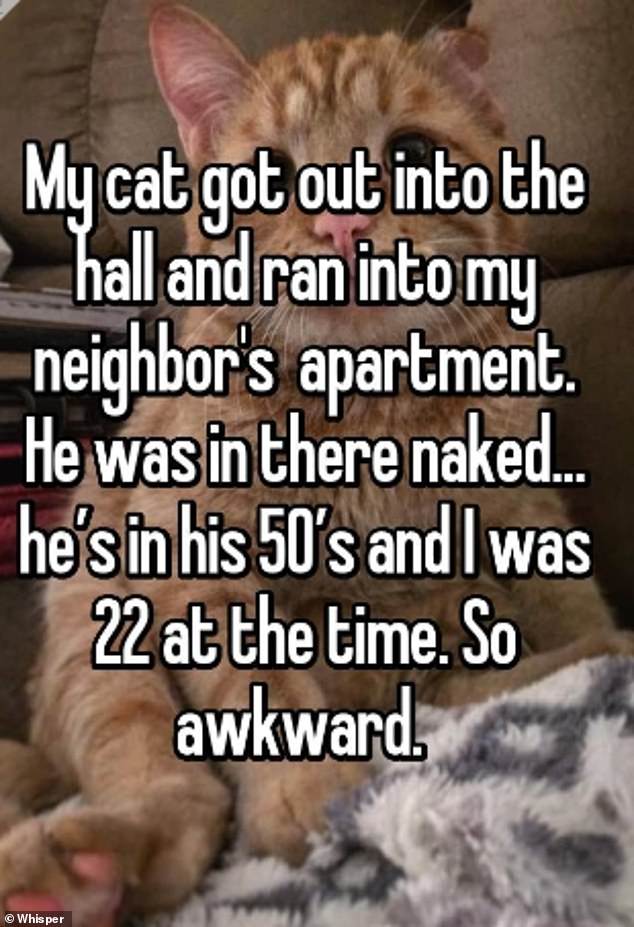 Awkward encounters! One woman, from the US, was left in the company of her naked neighbour after running after her escaped cat 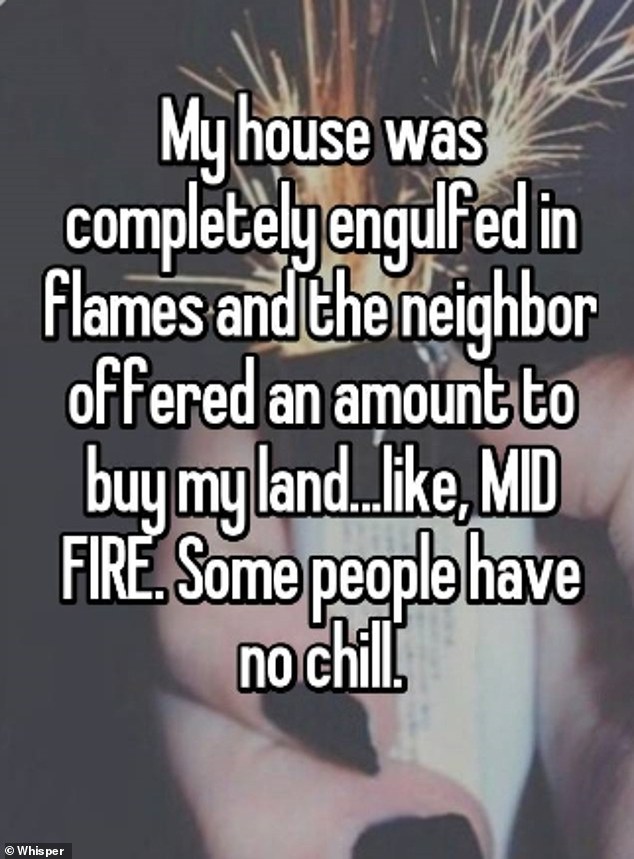 Burning bridges! This woman, from an unknown location, was left in shock after her neighbour offered to buy her plot of land…while her house was still up in flames 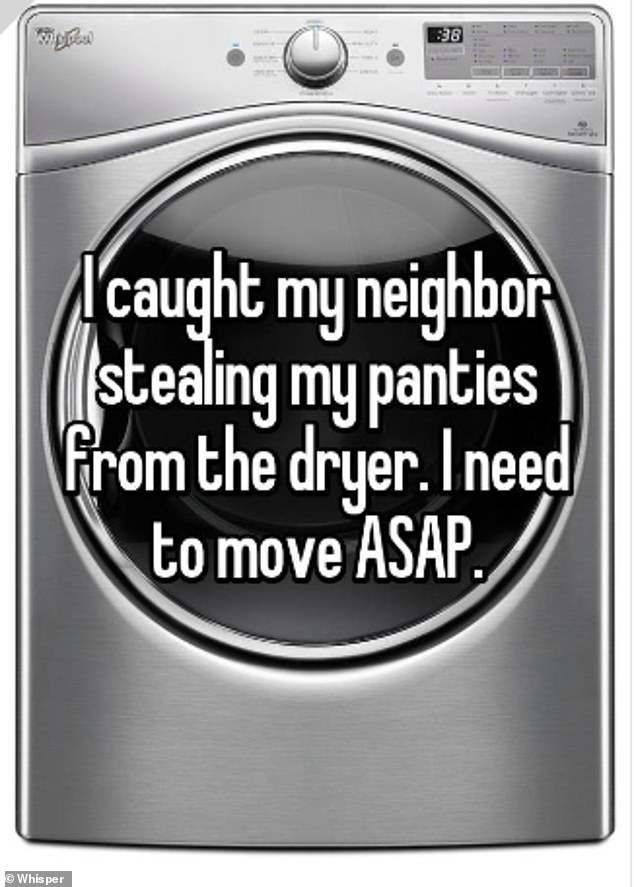 Caught red-handed! This woman, from the US, was horrified after catching her neighbour steal her underwear out of the dryer 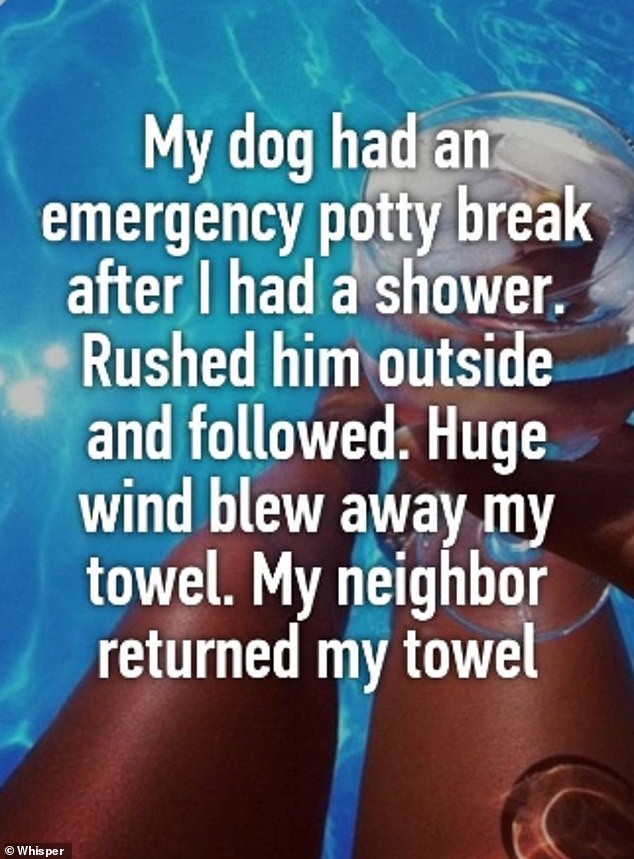 In the nude! One woman, from an unknown location, was left with nothing to cover her modesty thanks to a gust of wind blowing her towel away 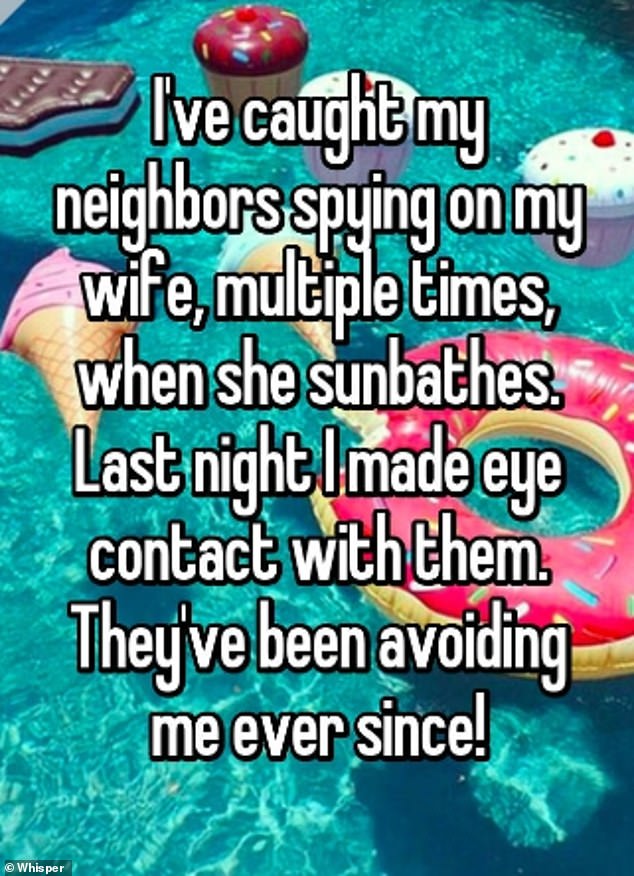 Eye-popping! Another, from Tanzania, caught his neighbours eyeing up his wife on several occasions – making for a very awkward encounter 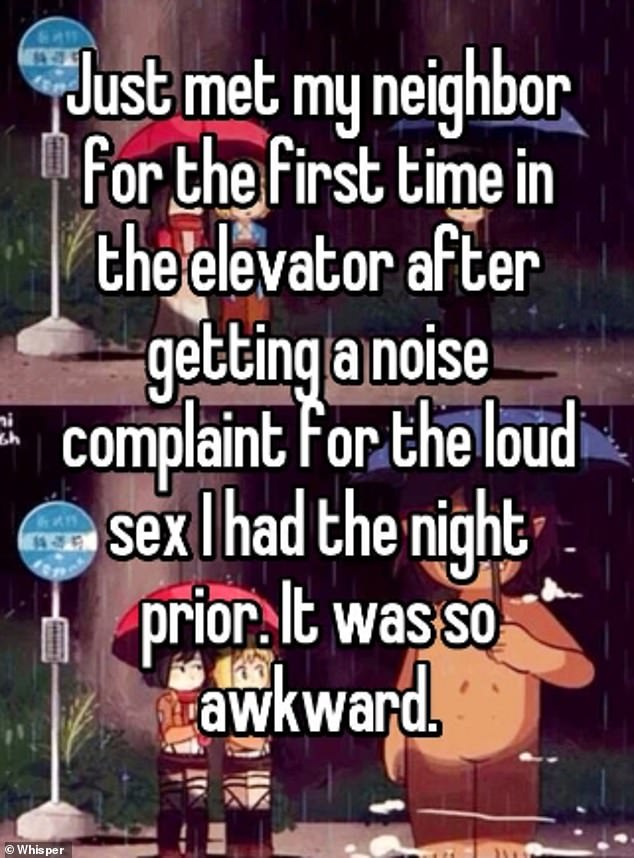 Arriving with a bang! One resident, from Genova, came face-to-face with her neighbour for the first time – the day after receiving a noise complaint following a night of passion 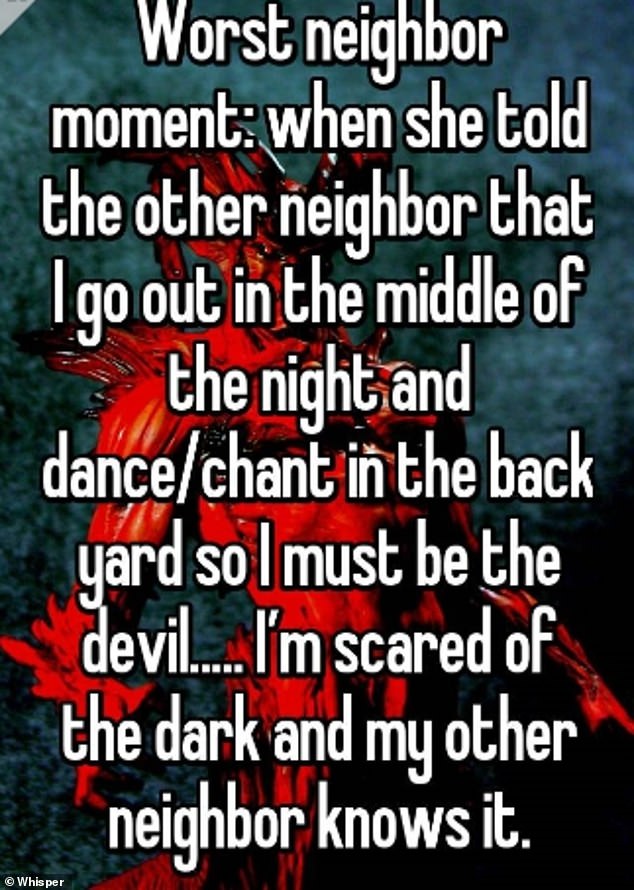 Evil spirit! This lady, from an unknown location, was stitched up by her other neighbour who decided to spread false rumours…with so little as an explanation 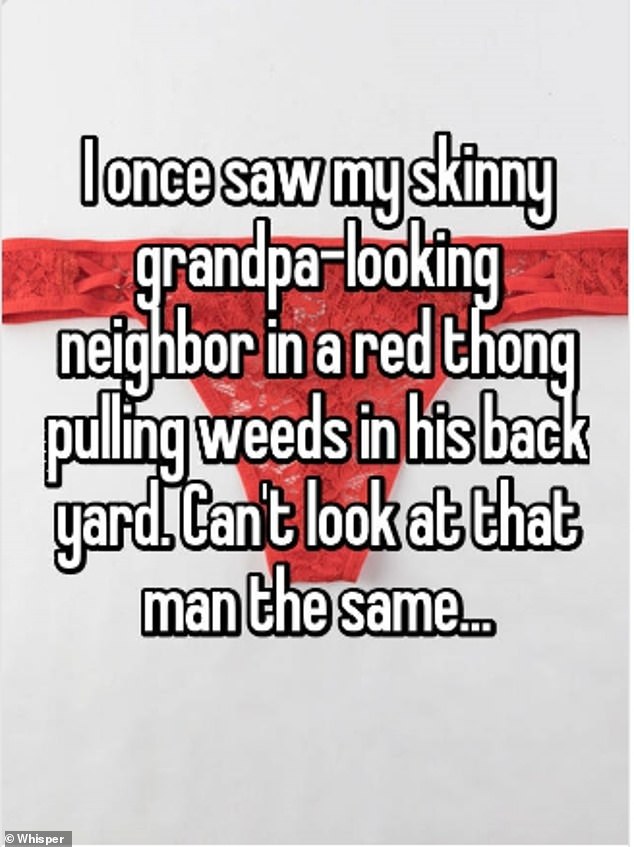 Planting the seed! Another, from the US, hasn’t looked at her elderly neighbour in the same way after catching him doing the weeding in his garden wearing a red thong 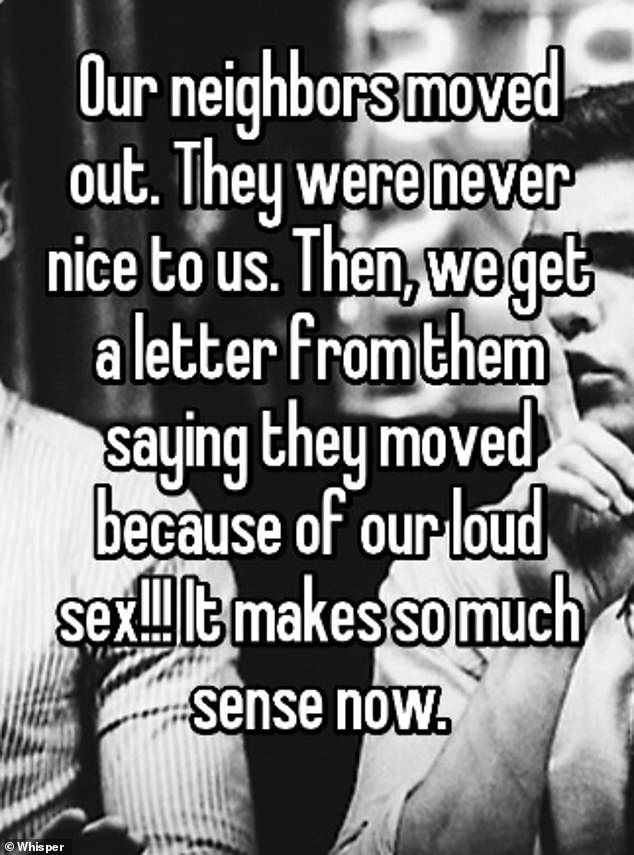 A night of passion! This person, whose location is unknown, felt confused until they received a disgruntled letter from their ex-neighbour revealing everything 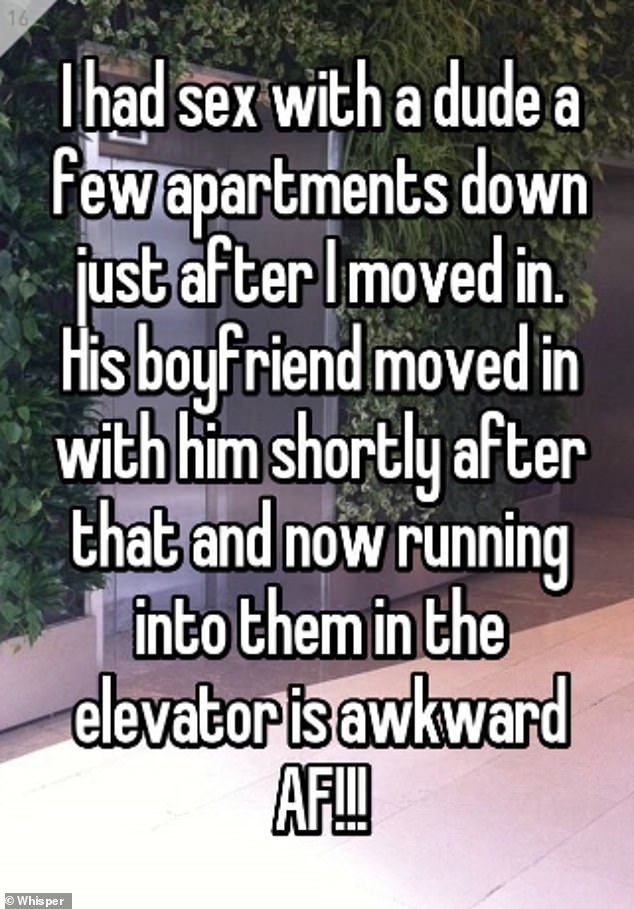 Neighbour from hell! This woman, from an unknown location, has to endure a very awkward experience every time she shares the lift with the guy who lives next door