Home » Lifestyle » ‘RHOC’s Elizabeth Vargas Shades ‘Hypocritical’ Braunwyn: She Isn’t Speaking To Anyone In The Cast

‘RHOC’s Elizabeth Vargas Shades ‘Hypocritical’ Braunwyn: She Isn’t Speaking To Anyone In The Cast 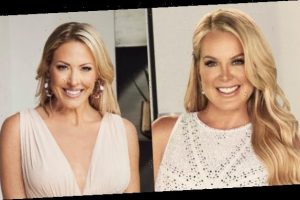 ‘RHOC’s Elizabeth Vargas had no problems sharing her feelings on Braunwyn Windham-Burke after EXCLUSIVELY confirming Braunwyn isn’t speaking to any of the cast!

The Real Housewives of Orange County‘s Elizabeth Vargas isn’t shy when it comes to throwing shade. The newest ‘wife didn’t hold back when sharing her true feelings when it comes to cast member Braunwyn Windham-Burke, 43 — even as her personal struggles continue to play out on TV. “Kelly [Dodd] had her problems with COVID and compliancy, but I just thought it was very, as usual, hypocritical of Braunwyn,” Elizabeth told HollywoodLife EXCLUSIVELY during an episode of TVTalk on Instagram Live on Dec. 9. “So it is what it is. Braunwyn has absolutely no right to talk because during COVID, she went all over the country. She went to Utah. She went all of these different places, so for her to say that about Kelly….”

The Dec. 9 episode, which was filmed back in March, was one of the darkest to date. We watched the ‘wives film most of the episode from their cellphones at the beginning of the world lockdown due to the coronavirus pandemic. But that didn’t stop Braunwyn from blasting Kelly for visiting her now-husband, Fox News corespondent Rick Leventhal, 60, instead of staying home with her teenage daughter Jolie. “I just can’t understand that risk for a booty call,” Braunwyn said.

Braunwyn has been at the center of this season’s drama amongst several of the ladies who felt she wasn’t being honest. In the season premiere, the mom of 7 admitted for the first time that she is an alcoholic. She then surprised viewers and her cast alike by coming out on Dec. 2. to GLAAD. “It feels so good to finally be living my truth,” Braunwyn said on her Instagram. “I am a lesbian. At 43 years old, I’ve finally been able to accept this part of myself and I’ve realized there are no rules about when someone should come out. This is my time.”

But this is not enough for Elizabeth to understand why Braunwyn has been behaving the way she has on camera as she admits she’s not talking to any of the cast. “I tried to get to know her on a number of occasions and I continue to repeat this, that, I reach out to her all of the time,” Elizabeth admitted. “I even just gave her a happy birthday text the other day. Even though she’s not talking to any of us, she’s going through a lot with her sobriety and transitions in her own life which are great,” she went on. commending her for coming forward about her sexuality.

“Whether people believe her or not or whether she’s full of shit or not, she’s still doing something for her which is admirable. Whether people agree with it or not, I can’t get my head around it,” she went on. “Seven kids, a husband, a lesbian and then I don’t know what’s going on with her, I just want to support the cause in general, so I guess right now, she chooses not to support the women on the show. On camera she does, but off camera she absolutely doesn’t so we all got tired of the whole on camera niceness and the off camera shading from her so I just kind of gave up. I tried my hardest. When you don’t get reciprocal love, you’re like why am I not getting it if I’m not receiving it?”

With the reunion for season 15 just around the corner, Elizabeth is looking forward to facing Braunwyn for the first time in several months. “Oh yes, absolutely,” Elizabeth said of the showdown. “I’m just going to ask her how her therapist is doing and how much longer she has until we can be friends!”

The Real Housewives of Orange County airs Wednesdays at 9pm on Bravo.

END_OF_DOCUMENT_TOKEN_TO_BE_REPLACED

END_OF_DOCUMENT_TOKEN_TO_BE_REPLACED
We and our partners use cookies on this site to improve our service, perform analytics, personalize advertising, measure advertising performance, and remember website preferences.Ok