Rhode Island Takes Steps to Change Its Official Name, Which Has 'Painful' Connection to Slavery 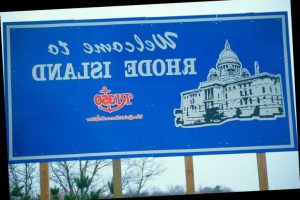 Rhode Island is taking steps to change its official name over “painful” ties to slavery.

The state’s official name is The State of Rhode Island and Providence Plantations — but on Monday, Gov. Gina Raimondo signed an executive order removing the word “Plantations” from her official communications, and from those of her executive agencies.

Instead, all official executive orders, citations and websites will only read “State of Rhode Island.”

“Rhode Island was founded on the principles of acceptance and tolerance, and our state’s name – and actions – should reflect those values,” Raimondo wrote on Twitter. “The steps I am announcing today are just the beginning, and I am fully committed to continuing to work alongside the community in stamping out individual and institutional racism in our state.”

In her executive order, Raimondo said there has been public discussion over removing the word for many years, as many residents “find it painful that a word so closely associated with slavery should appear in the official name of the State.”

She added that the pain the association causes to some residents “should be of concern to all Rhode Islanders and we should do everything in our power to ensure that all communities can take pride in our State.”

As soon as “practicable,” all agencies under the governor will eliminate the word from stationery, electronic letterhead and all other official correspondence, including paystubs.

Officially changing the state’s name would require voters to amend the Rhode Island Constitution, which Raimondo urged people to vote to approve in November.

Rhode Island had more enslaved people per capita than any other New England state, and “played a leading role in the transatlantic slave trade,” according to Brown University.

Though slavery was abolished in the state in 1652, the law wasn’t enforced, and it wasn’t until a century later, in 1784, that the General Assembly of Rhode Island passed the Gradual Emancipation Act, according to the university. The act meant that children born to enslaved people would not remain enslaved, and that enslavers could release healthy enslaved people between 21-40 years old "without assuming financial responsibility," Brown said.

Meanwhile, on Monday, Sen. Harold Metts and Rep. Anastasia Williams announced that the General Assembly would also be removing “and Providence Plantations” from official documents.

State House leadership has announced that they plan to consider the name change resolution, while the Senate has passed it, according to a news release.

Metts, who has traced his lineage on his mother’s side to the Speck Plantation near Charlottesville, Virginia, was behind a push for the name change in 2010, CBS News reported.

Despite the attempt, 78 percent of voters opposed it at the time, according to CBS.

“Attitudes may have changed substantially, even in the past few years — and even in the past few weeks,” he said in a statement earlier this month. “Whatever the meaning of the term ‘plantations’ in the context of Rhode Island’s history, it carries a horrific connotation when considering the tragic and racist history of our nation.”