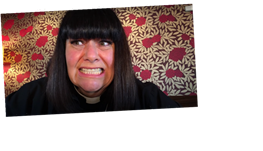 The BBC’s classic comedy The Vicar Of Dibley is to return for a series of lockdown specials as part of the corporation’s festive line-up this year.

Penned by Four Weddings And A Funeral writer Richard Curtis and Paul Mayhew-Archer, the series of three, 10-minute shorts will feature Dawn French reprising her role as vicar Geraldine Grainger.

Grainger will reflect on an extraordinary year for the country and her parish, during which she has been delivering sermons over Zoom. Hugo Horton (James Fleet) will also feature.

The Vicar Of Dibley has returned for many specials over the years and was last on the BBC in April when Grainger delivered an address to the nation as part of The Big Night In charity spectacular.

The Vicar Of Dibley In Lockdown is produced by Jon Plowman, while Curtis and Peter Bennett-Jones are the executive producers. It was commissioned by Charlotte Moore, Shane Allen, and Ben Caudell.

The show’s return was announced as part of BBC director general Tim Davie’s mission to keep audiences informed, educated, and entertained (the BBC’s founding principles) during the second wave of the coronavirus crisis.

“At a time that is challenging for individuals and every family, the BBC plays a unique role in putting a smile on people’s faces, in helping children with their education, connecting people in local communities, and providing some much needed escapism,” he said.