Flash, bang, wallop… what a shameful photograph! RICHARD LITTLEJOHN wishes our self-obsessed MPs would stop the trend for chamber selfies

Hello, Mum! Look at me! I’m in the House of Commons! The young man waving at the camera seems to have wandered into the chamber after getting separated from a school trip to Parliament.

Turns out he isn’t some Just William wannabe who forgot to take his Ritalin that morning and got lost in the labyrinth of corridors and committee rooms at Westminster.

And when I assumed he was a stray from a party of school kids, I wasn’t far off the mark. On the day he took up his seat in 2017, he found time to post a selfie online, posing with a new pencil case his mother had bought him to mark his first day in class. 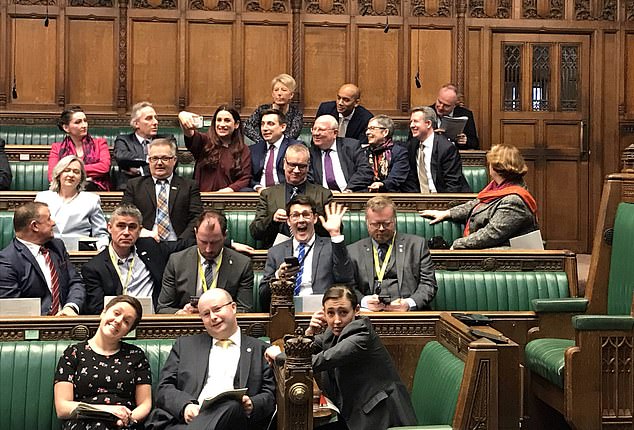 You couldn’t make it up.

Linden may only be a spear carrier in the great political pantomime, but he’s determined to thrust himself centre stage. He certainly made the most of his proximity to the Labour deserters on the backbenches. Here was one photie-opportunity he wasn’t going to miss.

Neither was the woman in the bottom left-hand corner. I’m assuming she’s SNP, too. Whoever she is, she couldn’t resist pulling a goofy face, like Bernie Winters sticking his head out of the curtain at the Glasgow Empire.

What made her think this was the time to play the Westminster village idiot?

A few rows behind her sat the seven MPs who resigned the Labour whip on Monday, precipitating — so we are told — the greatest crisis in British politics since the Corn Laws. Or was it Suez? I really should pay more attention.

Despite the magnitude of their treachery/bravery (depending on your point of view) they were all smiles. The chap who looks like Inspector Morse’s boss, DCS Strange, and the bloke sitting next to him even went to the trouble of dressing in identical Man at C&A suits, matching shirts and purple ties.

(Perhaps they are rehearsing for the leading roles in The Mike And Bernie Winters Story, a new motion picture from the makers of Stan & Ollie.) 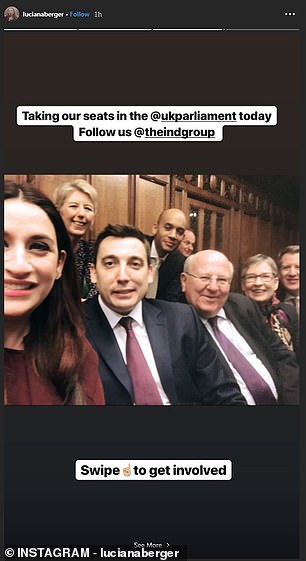 Selfie taken by Luciana Berger and posted on her Instagram

And what were the seven rebels all doing on this Momentous occasion, if you’ll pardon the pun?

Posing for a ruddy selfie.

Elsewhere, MPs were glued to their mobile phones, possibly anticipating this historic picture being live-streamed on Facebook or posted on Instagram, whatever that is.

I don’t know about you, but I’ve always considered the use of mobiles in the Commons chamber to be not only the height of bad manners, but a gross dereliction of duty.

They are supposed to be there to listen to speeches, to scrutinise legislation and debate the issues of the day. Instead, most MPs seem to be more interested in their own Twitter feeds. We don’t let schoolchildren play with phones in class, so why should members of Parliament be any different?

Taking selfies in the chamber is only the latest depressing development. Is it any wonder that politicians have never been held in such low esteem?

They always manage to make everything about them, no matter how much they like to pretend they are acting out of principle, in the national interest.

Truth is, they’re all living in their own movie, as this revealing picture proves.

When it was taken, and naturally stuck up on Twitter, the eighth Labour rebel, Joan Ryan, had yet to arrive.

She was still making her way to the House in triumphant procession, arm-in-arm with the three Tory MPs who resigned this week — Soubry Loo, Heidi-Hi and Dr Wossname.

They seemed to be channelling that famous Boots The Chemist commercial, music by Allen Toussaint and Ernie K Doe.

They looked like the political version of Posh, Shorty, Ginger, Scary and the little blonde job, only a couple of decades older. Ladies and gentlemen, I give you the Old Spice Girls.

When they landed in the Commons, they made straight for their fellow revolutionaries on the backbenches, to be greeted with hugs, kisses, handshakes, high-fives and selfies all round.

Whatever principled motives they claim for doing a Guy Fawkes on their respective parties, the celebrations stuck in the craw. 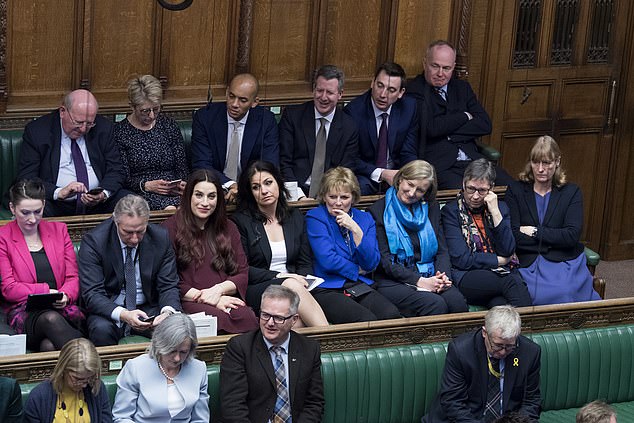 Luciana Berger catches sight of the camera and flashes a smile

They all seem to be enjoying the moment a little too much. As I wrote on Tuesday, with exception of the ubiquitous and ferociously ambitious Chucky Umunna, until now most people had no idea who any of them were.

Apart, that is, from Soubry Loo, who shot to fame as a result of her increasingly deranged anti-Brexit act after the referendum went against her.

Yesterday, she popped up as guest host on an LBC Radio phone-in, full of unwarranted self-righteousness and barking at anyone who dared to disagree with her. She even played the fem-card, accusing one male critic of ‘mansplaining’.

So thrilled was she with the hectoring sound of her own voice, that she had to be reminded through her headphones by a producer to take an advert break.

Don’t give up the day-job, pet. Sorry, I forgot. You just did.

Look, I acknowledge absolutely that Luciana Berger had no option other than to quit over Labour’s disgusting, institutional anti-Semitism. And, yes, the other Labour MPs have legitimate grievances about the direction their party has taken.

But the one thing they all have in common, and with the three Tories, is a fervent determination to stop Brexit, despite 17.4 million people voting to Leave. That’s what drives them and binds them together.

These self-styled ‘rebels’ are rebelling against the very people they are paid to represent.

Even those like me who think Mother Theresa’s risible ‘deal’ is a humiliating betrayal of historic proportions must reluctantly accept that we are going to have to swallow some fairly unpalatable compromises if we’re going to get out in one piece.

Best hope now is that we can pick the bones out of it later.

More from Richard Littlejohn for the Daily Mail…

The past, tawdry two-and-a-half years have exposed virtually the entire political class, with a few honourable exceptions, as fundamentally anti-democratic and self-obsessed.

And just as push is coming to shove, some maverick MPs on both sides of the House have thrown their toys out of the pram to manufacture an unnecessary political diversion which could easily have waited until after March 29, when Britain should (repeat, should) leave the EU, in some shape or form.

Yet instead of knuckling down to the task in hand, they have decided to play silly buggers.

It’s not just the ‘rebels’ in this snapshot of life in the Mother of Parliaments, it’s the rest of them, too — a bunch of overgrown, over-entitled schoolchildren, gurning for the camera and gawping at their mobiles. Do they have any idea how this plays in the real world outside their hermetically sealed bubble? Probably not.

They could do worse to listen to Positively 4th Street and heed the words of Bob Dylan.

I wish that for just one time, you could stand inside my shoes. You’d know what a drag it is to see you.

Maybe instead of posing for selfies, they should take a hard look in the mirror. Better still, pin this photo to their fridges. 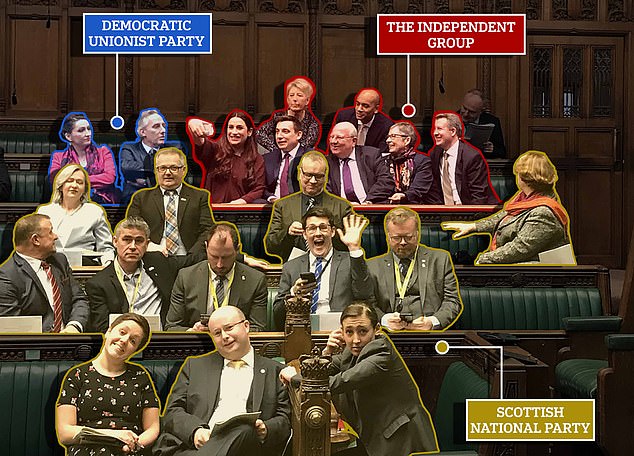