Home » Lifestyle » RICHARD LITTLEJOHN:May is, stuck in (the middle with EU)

RICHARD LITTLEJOHN:May is, stuck in (the middle with EU)

RICHARD LITTLEJOHN: Clowns to the left of her, jokers to the right Here May is, stuck in (the middle with EU)

There comes a time in a columnist’s life when the bile well runs dry. The invective mine is exhausted. Not even Arthur Scargill could justify a year-long strike to keep it open.

I’ve reached that threshold with Mother Theresa. There’s nowhere else to go.

Believe me, I’ve tried. Those of you who have been kind enough to stick with me over the years know that I’m no fan of Mrs May. 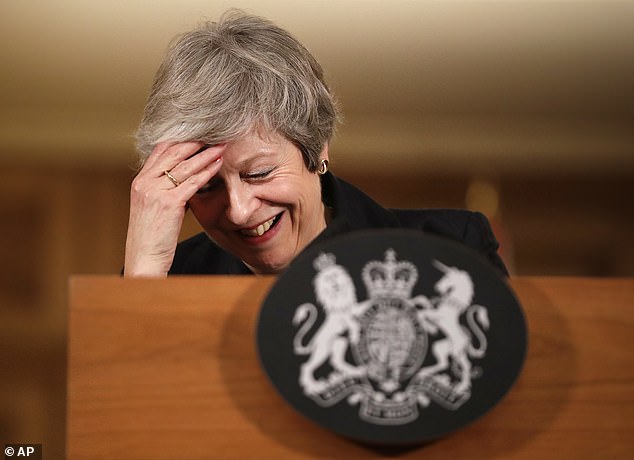 I have reached the point where there is no longer any invective I can use against Mother Theresa, pictured. Believe me, I’ve tried. Those of you who have been kind enough to stick with me over the years know that I’m no fan of Mrs May

Her performance in Parliament yesterday was excruciating. At one stage, I turned off the sound and switched on the stereo.

Cue Roky Erickson’s I Walked With A Zombie. You can find it on YouTube. So tell me, what did I get wrong in Tuesday’s column?

And yet, and yet. We’ll get there in a minute.

Let’s get the caveat out of the way from the off. The bill of goods she is trying to foist on the British people is an absolute scandal.

But there was a certain magnificence about the way she did her Dido impersonation. She will go down with the ship.

More from Richard Littlejohn for the Daily Mail…

Trust me. It’s only a matter of time. Just as I read the Guardian so that you don’t have to, I also keep a weather eye on Sky News with the sound down, while you’re watching something to do with buying a tumbledown villa on the Costa del Crime, or a cravatted spiv in dodgy corduroy strides knocking out a faux-Wedgwood ashtray, worth about three-and-six.

The worst decision Theresa made yesterday was scheduling her set-piece Commons turn to coincide with Ken Bruce’s Popmaster quiz on Radio 2.

I was in a major quandary. Popmaster is an integral part of my day, even if I get every question from the Eighties wrong.

And as I watched both Theresa’s alleged friends and enemies round on her, I couldn’t help thinking of Tennyson’s Charge Of The Light Brigade — which was, unless I’m mistaken, the B-side of Don’t You Want Me Baby.

Cannon to right of them,

Cannon to left of them,

Cannon in front of them, etc.

Actually, more Steelers Wheel, come to think of it.

Clowns to the left of me,

Jokers to the right.

Anyway, I looked up at Sky News and there was the latest bird who isn’t going to get Adam Boulton’s job — dressed up in hunting pink, like Ray Davies from the cover of The Kinks’ You Really Got Me EP — with another exciting scoop.

She revealed that some woman you’d never heard of had resigned from a job you didn’t know she had in the first place. And also, another chap, who most of us thought was a Sri Lankan batsman, has called it a day, too.

That’s going to make all the difference.

Nevertheless, even though she’s gone rip-roaring bonkers, it would be ungallant not to acknowledge Mother Theresa’s bovine intransigence. It was an hour before any MP had a good word to say for her ‘deal’.

She was like the lioness defending her cubs — even though her cubs had legged it to the bar long before she sat down.

One by one, they all dribbled away, until by lunchtime Mother Theresa was effectively talking to herself and Captain Underpants — Labour’s Chris Wossname — trying to get in on the act.

By then, the game was up. But on she soldiered.

Outside, Olivia Newton-Mogg was giving an hilarious press conference, reminiscent of the Tory leadership shambles a few years ago, five minutes after the first plane hit the World Trade Center.

Jacob, old son, we’re with you. No need for the 24-hour news channel nonsense. You’re better than that.

As I’m writing this, it’s 5pm and we’re all waiting for the PM’s press conference.

(Well, I say, all. More people were waiting for Wayne Rooney’s farewell at Wembley.)

By the way, what’s with the crossed Union Jacks as a backdrop? This isn’t the White House. We’re not American. We don’t go in for this Hail To The Chief cobblers.

Bring on Jim Acosta from CNN!

For 30 seconds, I actually thought she was going to do the decent thing. No such luck.

Loved this photo of Ronnie Miles, president of Scottish Bakers, at the World Scotch Pie Championships in Dunfermline.

Thirty-five (odd) years ago, The Cartoonist pub, off Fleet Street, my local, ran out of Scotch pies.

Two of our most brilliant Scottish journalists, exiled in London — Colin ‘The Animal’ Adamson and the late Don ‘The Donkey’ Mackay — bet each other a tenner they could have a plate of Scotch pies on the bar of The Cartoonist by 11am the following day. 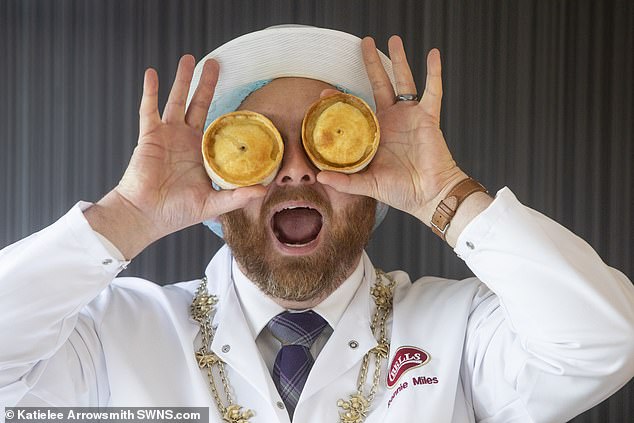 Loved this photo of Ronnie Miles, president of Scottish Bakers, at the World Scotch Pie Championships in Dunfermline

One took the sleeper, the other the BA shuttle.

The Animal won, but only after getting his dad, a senior police officer and Scotland’s real-life Jim Taggart, to flag down a baker’s van outside Bathgate at 5.30am.

When Don died, he still owed The Animal a tenner.

And some of you think Still Game is fiction . 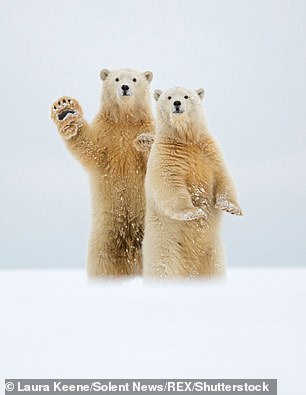 My favourite story of the week was that despite alleged global warming, according to the Inuit, the polar bear population is on the increase

My favourite story of the week was that despite alleged global warming, according to the Inuit, the polar bear population is on the increase.

In Canada, they’re terrorising suburban neighbourhoods after emigrating from the Arctic Circle.

It’s not uncommon to wake up in the morning to find a polar bear eating the contents of your dustbin.

The good news as far as we are concerned here in Britain is that we may have found a solution to our recycling dilemma.

Now that councils have decided they’re only going to empty the dustbins once a month, why don’t we just give the contract to the polar bears? You’d get your bins emptied once (or even several times) a week and save the planet at the same time.

And when Quinn the Eskimo gets here . . .

Sometimes our brilliant cartoonist Gary is spoiled for choice. Today is one of those days. Does he go with the vet who says you shouldn’t brush your dog’s teeth with a regular toothpaste?

Or the woman who wants guide dogs banned on the grounds that it’s animal cruelty? Never mind where that leaves the blind.

Then there’s the story about the 15-year-old who’s been given six points on his licence before he’s old enough to drive because he was nicked at high speed on an electric scooter. 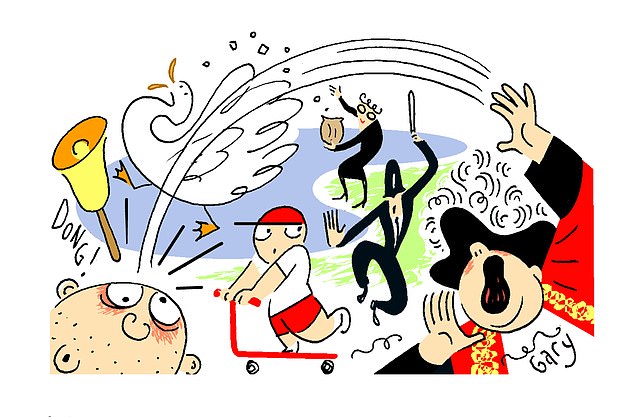 Sometimes our brilliant cartoonist Gary is spoiled for choice. Today is one of those days. Does he go with the vet who says you shouldn’t brush your dog’s teeth with a regular toothpaste?

Yet on our local news last night, there was a reporter buzzing round the Olympic Park in East London, proclaiming that electric scooters were the future. Mind you, Peter Kay said the same about garlic bread.

And speaking of bread, another animal rights expert has just announced that unless we feed swans bread, they will die out. Hang on, a couple of months ago we were told that we shouldn’t feed bread to ducks because they would choke to death.

You’re supposed to be.

Elsewhere a town crier in Gloucester who battered a bunch of thugs with his bell has been hailed as a hero.