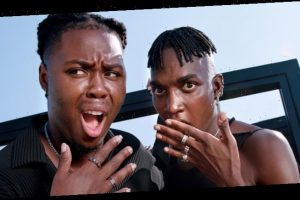 For our annual “The Originals” portfolio, we asked creatives—pioneers in the fields of art, design, fashion, comedy, activism and more—to share their insights on staying true to themselves and pushing the creative envelope in a chaotic year. Read all the Q+As from this year’s group here.

Your one-of-a-kind friendship and distinctive senses of humor have sparked huge followings on social media. In the past few years,  you’ve launched a Spotify podcast, We Said What We Said, and a show on Snapchat, Road -Trippin’, which follows your adventures and hijinks driving across the United States. What were some of the more memorable moments from filming your show?

Denzel Dion: The most shocking thing for me was the survivalist experience we had. The fact that we had to drink water from a lake and stuff like that, start a fire out of sticks…

Rickey Thompson: I agree. I was not having that. I’m a guy who does resorts, hotels—I don’t do outdoors. I don’t mess with bears.

Denzel, tell me a little bit about your upcoming clothing line, Noid. Why was it important for it to be genderless?

Dion: Because male clothing is just very boring. Anytime I see female clothing, I’m like, Oh my God, this would look so nice on a guy. But they don’t cut in male sizing. And even when Rickey wears women’s clothes, I’m like, That looks so nice, they need to make that for boys. You know what I mean? I feel like boys’ clothing is just so basic—not all the time, but I just wanted it for all people, to make androgynous looks, for whatever you’re feeling.

Why do you think people are so drawn to watching your friendship play out on social media?

Thompson: We are literally two different-as-night-and-day people. Denzel’s a Capricorn, I’m an Aquarius. He’s the strong person, I’m the emotional one. And I just love how we can  help each other. We’ve been friends for six years now, and it’s just been the greatest experience ever. He’s more than a friend; he’s my brother.

Dion: Our friendship is not forced. A lot of people are trying to be friends for the wrong reasons—social climbing, or just if it looks cool. With us, it’s just natural, and we’re just ourselves. You can always see when someone is being real and when someone is just doing it to fake the funk.

Whom do you consider an original?

Thompson: Rihanna, literally. A trendsetter, honestly. No other girl is doing it like her.

Dion: No one, and I feel like that’s why she’s so successful. What she does, what she puts her name on, and how she carries herself—it’s all very her.