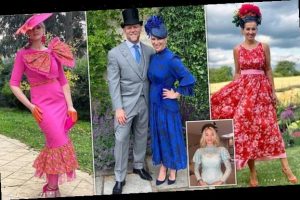 Royal Ascot fans have donned their best hats and dresses from the comfort of their own home today as the race meeting commenced for the first time behind closed doors.

For the first time since becoming a ‘royal week’ in 1911, the five-day 2020 festival will not be open to the 300,000 visitors who usually descend on the racecourse.

Among the racing enthusiasts staying at home is the Queen, who has been forced to stay away for the first time in her 68-year reign. The monarch praised the ‘valiant’ efforts of organisers and said she is sure it will still be the ‘highlight’ of the racing calendar, despite the ‘different’ set-up caused by the coronavirus crisis.

However virtual attendees have still been joining in the fun by sharing their favourite hat and raceday ensembles on social media with the hashtags #StyledWithThanks #RoyalAscot.

Among the glamorous would-be racegoers taking part are Zara and Mike Tindall, who posed for a photo from their home on Princess Anne’s Gatcombe estate in Gloucestershire, where they have been in lockdown with their two children, Mia, six, and Lena, one. 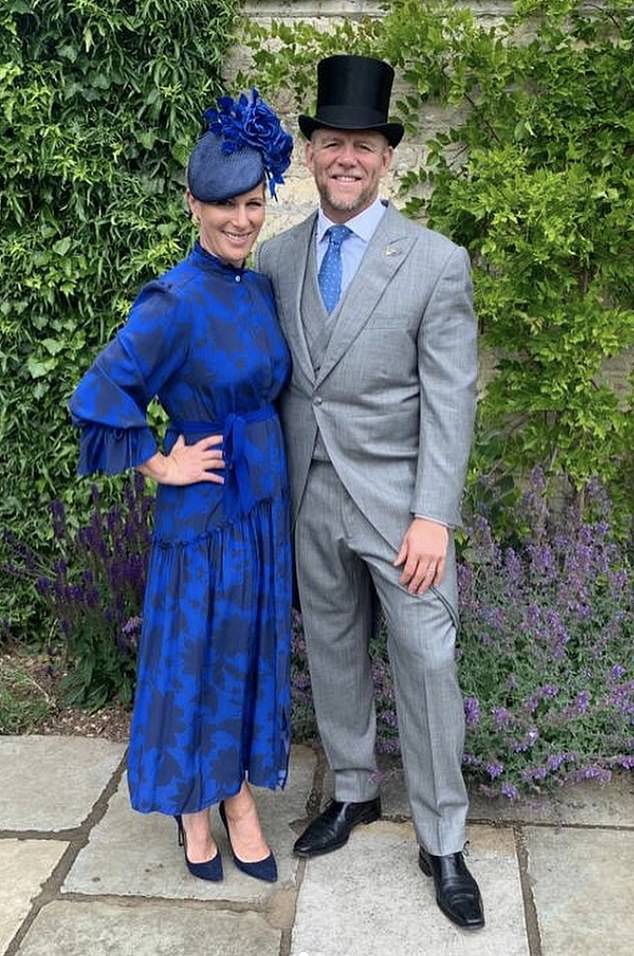 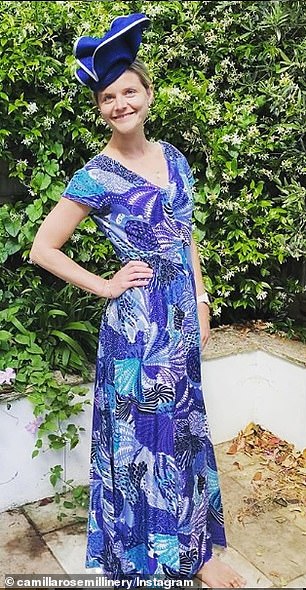 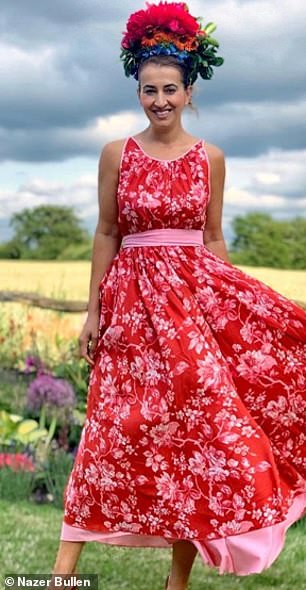 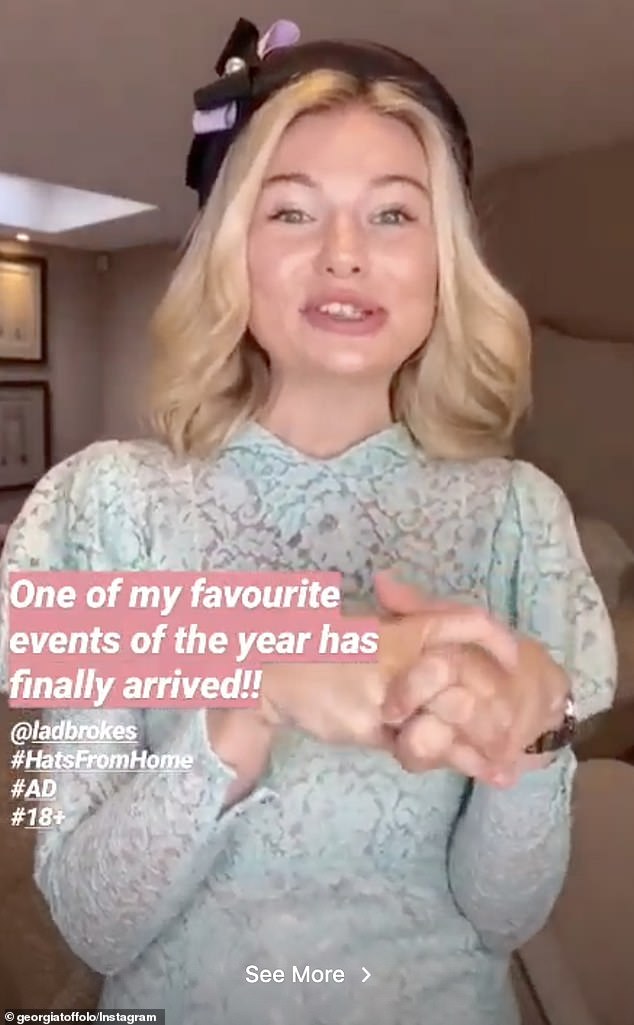 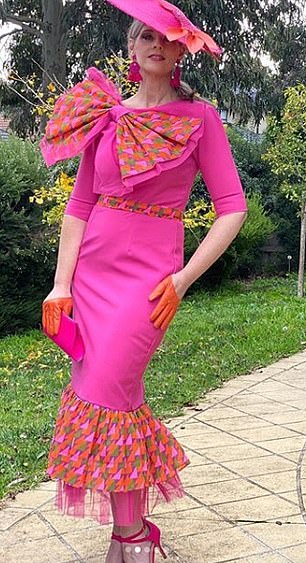 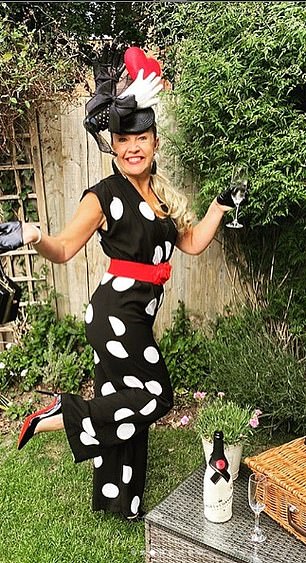 A fan from Australia dresses up in a pink and orange ensemble to celebrate the day (left). A milliner wears one of her latest pieces titled ‘Our lives in Their Hands’ for the virtual event (right) 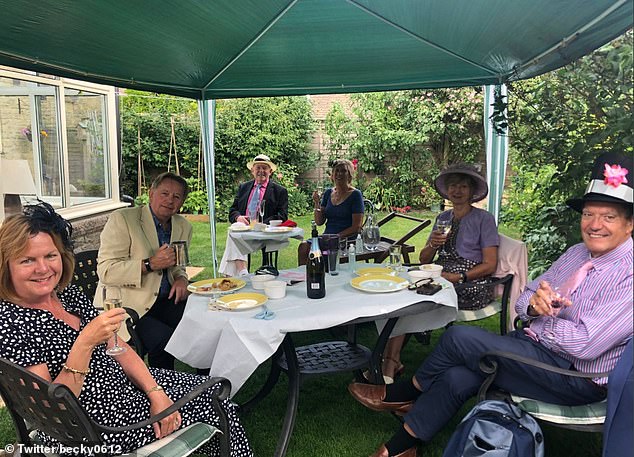 Feeling fabulous! One group of would-be racegoers got together in a garden today

Zara Tindall, 39, was pictured wearing a bespoke hat by Juliette Botterill and dress by Beulah, while Mike, 41, looked dapper in a top hat and morning suit.

Pictures taken at Ascot Racecourse today showed the usually bustling grandstands and hospitality enclosures empty aside from the occasional member of staff, while the roads surrounding the venue were largely deserted.

The Queen, 94, who will be watching on television from Windsor Castle, praised the ‘valiant’ efforts of those involved in working to make this year’s event a success in a message for the Ascot racecards.

She wrote: ‘I send my best wishes to the thousands of racing professionals and enthusiasts who will join me in celebrating this year’s Royal Ascot.

‘In these challenging times, we are once again delighted to welcome the best horses and jockeys from across the world and pay tribute to those who have helped make this race meeting possible.

‘This year Ascot will feel different for many, as it is so often a chance for friends, families and colleagues to gather together and enjoy a shared passion. 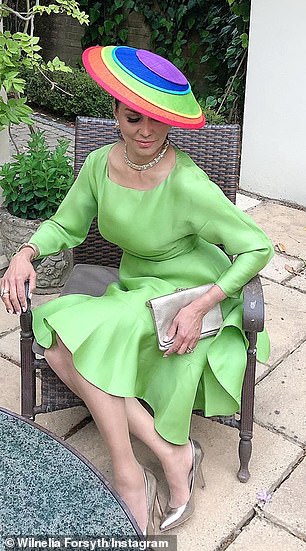 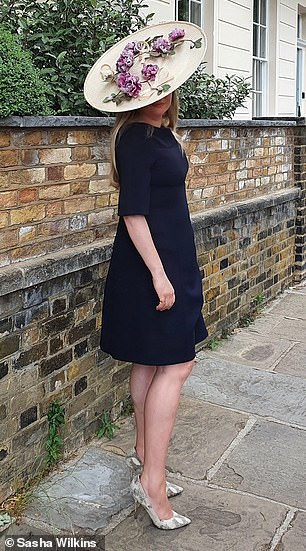 Wilnelia Forsyth pictured in a rainbow fascinator to celebrate the role of key workers during the Covid-19 pandemic (left). Sasha Wilkins posed in a navy dress and floral headpiece to mark the event (right) 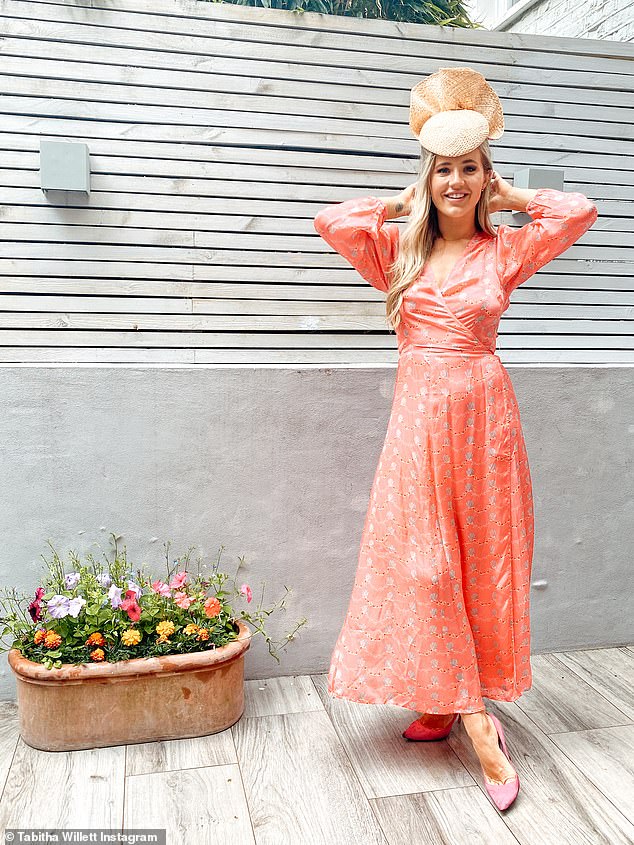 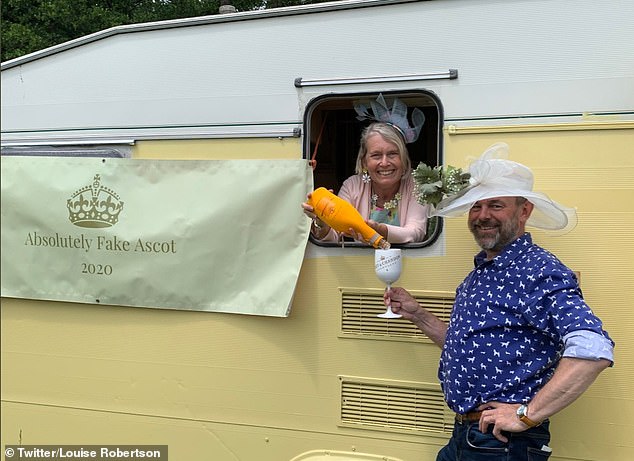 Racegoers got into the spirit of the event with their own Champagne and signage, pictured

‘I am sure however, that with the valiant efforts of the organisers, owners, trainers and stable staff, it will remain one of Britain’s finest sporting occasions and a highlight of the racing calendar.

‘To everyone attending Royal Ascot, in person or virtually, I hope you have a most enjoyable and unique week of racing.’

Racing began with the Buckingham Palace Handicap at 1.15pm followed by the Queen Anne Stakes, which was won by Circus Maximus and Ryan Moore.

Made in Chelsea star Georgia Toffolo, 25, was pictured on her Instagram story today revealing how Ascot is one of her ‘favourite events of the year’.

Toff, as she is affectionately known, was seen wearing a teal-coloured lace dress with a black pillbox hat adorned with lilac bow.

Good Morning Britain and ITV Racing presenter Charlotte Hawkins posted a picture of her outfit for the virtual race meeting.

Wearing a lilac, blue, pink and yellow ensemble she wrote: ‘So sad not to be at Royal Ascot this week, it’s first time ever it’s been held behind closed doors.’ 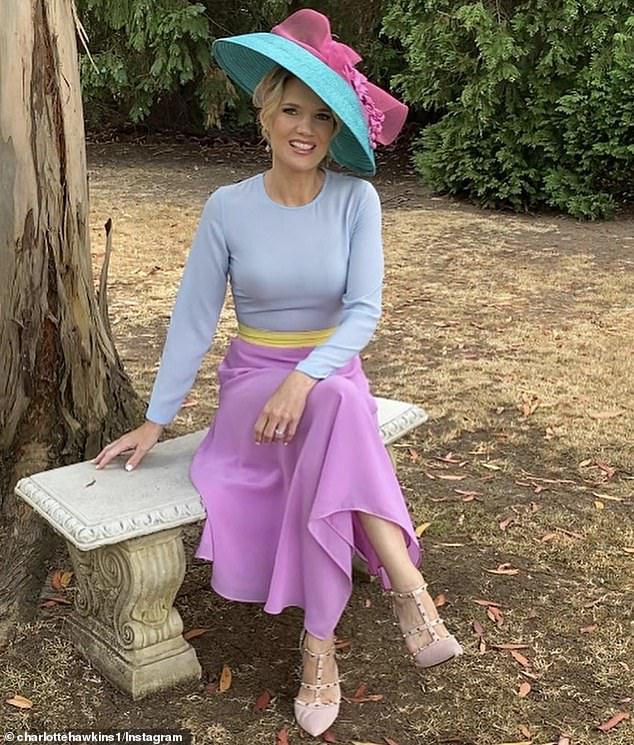 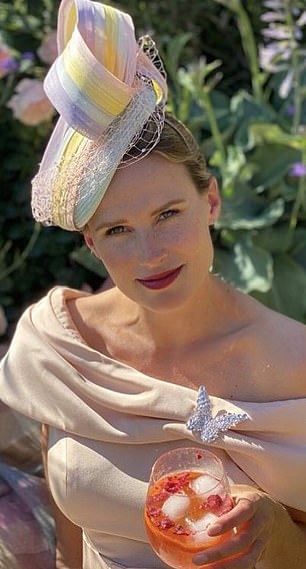 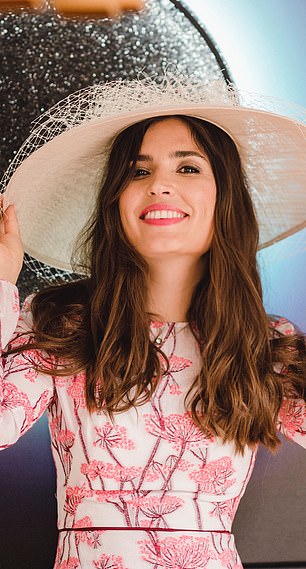 Francesca Cumani pictured with a pastel-toned fascinator and refreshing drink to celebrate Royal Ascot at Home (left). Entrepreneur Marine Tanguy posed with her nude hat and floral dress for the occasion (right)

All participants are being encouraged to donate £5 to the campaign fundraising page, share their outfit photo and tell their friends to do the same, helping to spread the #StyledWithThanks message in recognition of those working on the frontline of the global Covid-19 crisis. 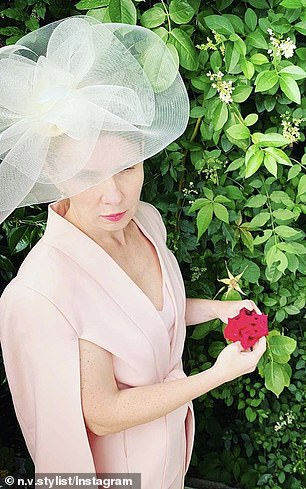 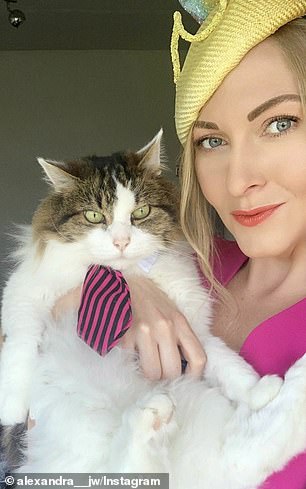 Stylist Natasha Vinnikova posed with a rose at her home in Muswell Hill, London (left). Alexandra Wood shared a picture with her cat with the pair suitably matching in pink (right) 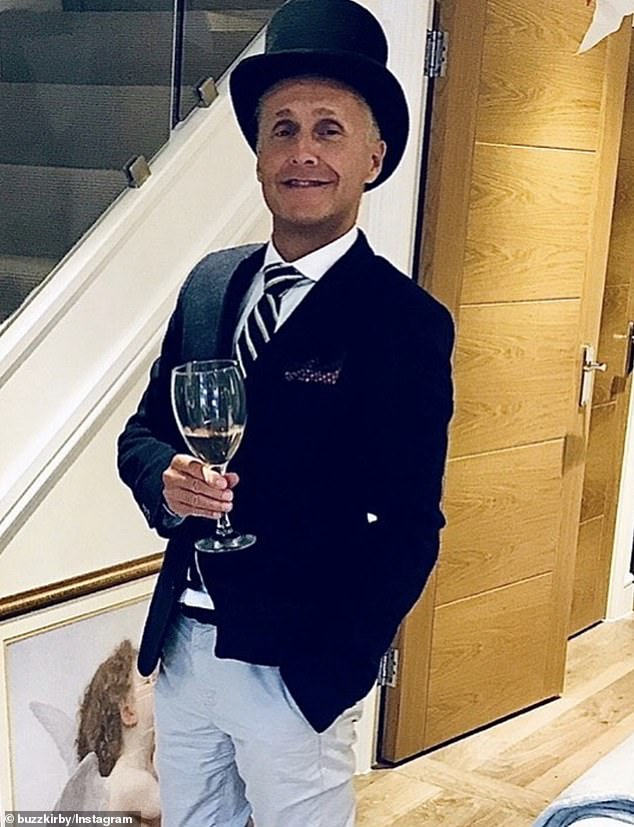 Richard Kirby, from Amersham, Buckinghamshire, shared a picture of suitably dressed for the occasion with a glass of bubbly

Gayle Rinkoff pictured in a floral dress and sandals for the occasion (left). Mariko Kuo was pictured wearing a long white jumpsuit with bow surrounded by bouquets on her balcony (right)

Prizes will be given for the most Elegant, Original and Uplifting outfits across the week with a panel of expert industry judges, including Stephen Jones and Caroline Rush of the British Fashion Council, selecting the winners.

Additionally, photos posted using the campaign hashtags will be turned into a giant rainbow mosaic image tribute which will become a permanent installation at Ascot Racecourse.

Ascot is launching the charity appeal with a £100,000 donation to be split between four frontline charities: The National Emergencies Trust Relief Fund, NHS Charities Together, The Care Workers Charity and the Berkshire Community Foundation Coronavirus Fund.

Henry Birtles has written a Royal Ascot at Home poem which has been recorded by some familiar faces including AP McCoy, Frankie Dettori, Liz Hurley, Peter Phillips plus everyday people and supporters of the #StyledWithThanks message.

Henry Birtles has written a Royal Ascot at Home poem which has been recorded by some familiar faces including AP McCoy, Frankie Dettori, Liz Hurley, Peter Phillips plus everyday people and supporters of the #StyledWithThanks message.

The virtual event comes after Royal Ascot updated its style guide to allow navy morning suits to be permitted in the Royal Enclosure along with ‘playful’ ties allowed.

The virtual event comes after Royal Ascot updated its style guide to allow navy morning suits to be permitted in the Royal Enclosure along with ‘playful’ ties allowed. 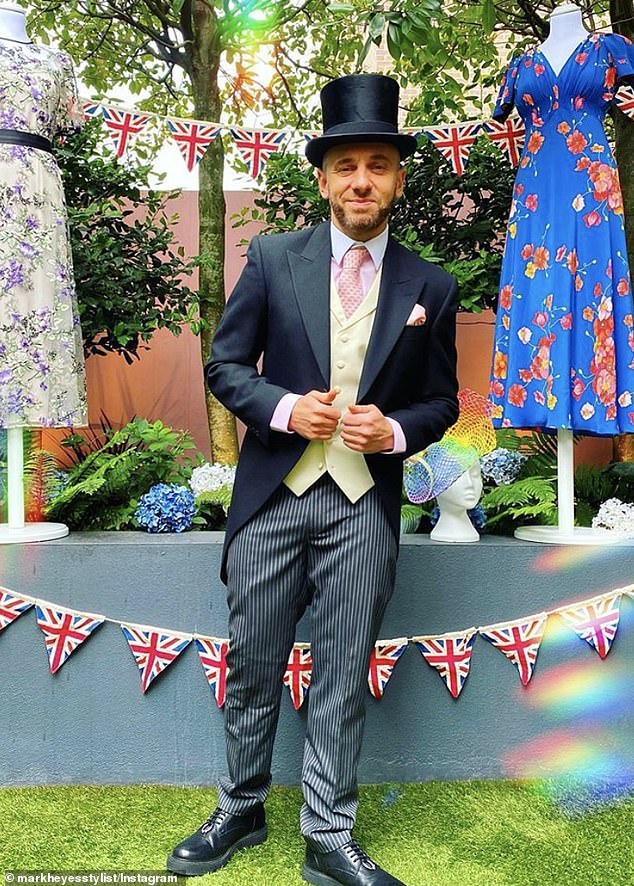 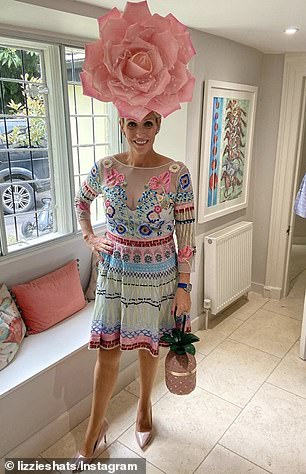 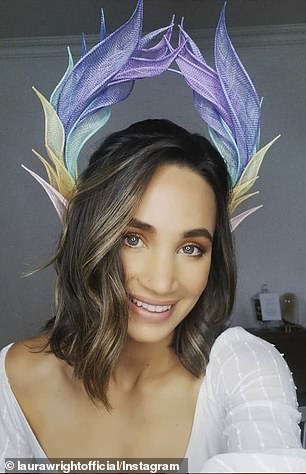