Ruth and Eamonn slammed for wrapping up while ‘freezing’ children sing

‘Those poor kids’: Viewers are left shocked after schoolchildren sing outside This Morning’s studio WITHOUT their coats – while Ruth and Eamonn wrap up warm

Viewers were left shocked after schoolchildren were filmed singing outside the This Morning studio without their coats.

The pupils from Ballantrae Primary, Ayrshire, performed carols outdoors at the ITV complex at White City, London, where temperatures hovered around 10C.

Fans of the show said the children looked ‘freezing’ standing in their school uniforms of a white shirt and red jumper.

Meanwhile their headmistress and presenters Eamonn Holmes, 59, and Ruth Langsford, 58, wrapped up warm to watch. 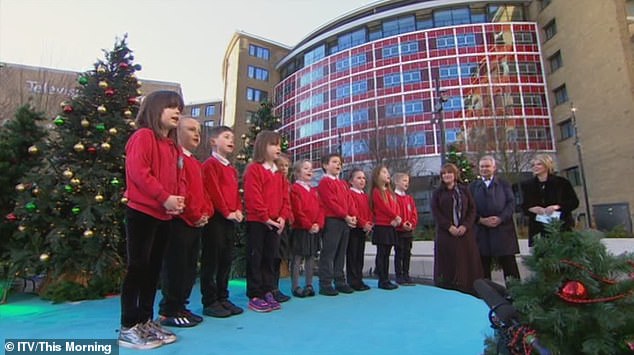 The pupils from Ballantrae Primary, Ayrshire, performed carols outdoors at the ITV complex at White City, London, on This Morning today, pictured. Many viewers commented on how cold the children looked in their school uniforms without any coats on

The children had been welcomed on to the show to sing after their school was destroyed in a fire in June.

The damage means the children will not be able to perform the traditional nativity.

The pupils opened Monday morning’s programme with a sweet rendition of Away In A Manger.

However many viewers were distracted by how cold the children looked and claimed they were under-dressed for the chilly winter’s day. 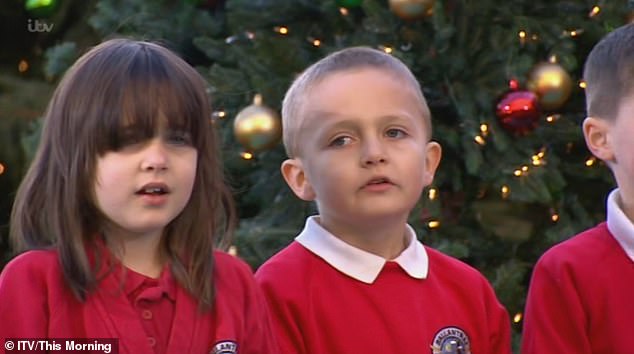 The students (pictured) were from Ballantrae Primary, Ayrshire to perform Christmas carols after their school was destroyed in a fire

One tweeted: ‘Some of those kids look freezing… Where are the coats? #ThisMorning.’

Another said: ‘So their school burnt down, so they bring them all the way from Scotland to London to sing outside in the cold, no coats, their tired, and the kids are shouting their way through the song.’

A third posted: ‘The little girl on the end looked freezing!!..nice you’ve all got ya coats on never mind the kids.’ 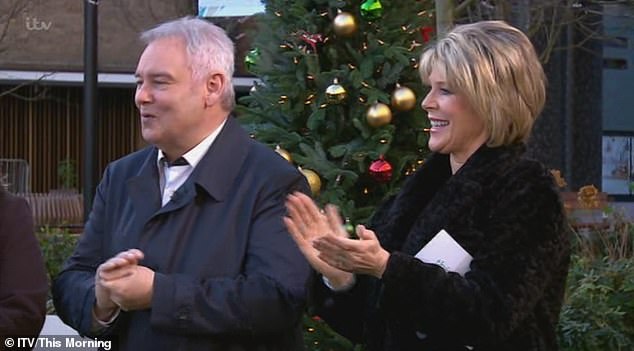 Ruth, 58, (right) kept out the cold in a faux coat and Eamonn, 59, (left) wore a smart grey number while the schoolchildren went without their coats

Others said it was particularly noticeable as Eamonn and Ruth were standing with their own coats on.

One tweeted: ‘I love the way the headmistress, @EamonnHolmes & @RuthieeL are wrapped up warm and the kids are stood there freezing in just their uniforms.’

This Morning flew the children to the programme’s London studios, where they were treated to an ice skating visit and singing before paying a visit to the Natural History Museum.

Headmistress Yvonne Templeton said: ‘The fire destroyed most of the school and three of the children;’s classrooms, it’s a school of four classrooms.

‘We were left basically homeless.’