Black Panther changed the way the Academy, and even some fans, viewed "super hero movies." And nothing is better evidence of that than Ruth Carter winning the 2019 Oscar for Best Costume Design — not only was it her personal first win, but it was also the first time a black woman won in the category ever. (It’s also the first Oscar win for Marvel Studios.) Carter, who was previously nominated for Amistad and Malcom X, first said that the award was a "long time coming," and called out Spike Lee, who stood up in the audience. She wasn’t kidding — Carter got her start on Lee’s film, School Daze and she also did the wardrobe on the pilot episode of Seinfeld, proving that there is no character the woman can’t bring to life.

Carter continued in her speech, “Marvel may have created the first black superhero, but through costume design, we turned him into an African king. It’s been my life’s honor to create costumes. Thank you to the Academy, and thank you for honoring African royalty and the empowered way women can look and lead on screen.” In the crowd, Black Panther star Angela Bassett nodded along enthusiastically. Other of the film’s talent were all smiling ear to ear as the camera panned to them during her speech — it was a moment.

As if that wasn’t enough of a first, just after Carter’s acceptance speech, Black Panther won again, with Hannah Beachler becoming the first black woman to ever win for Best Production Design. 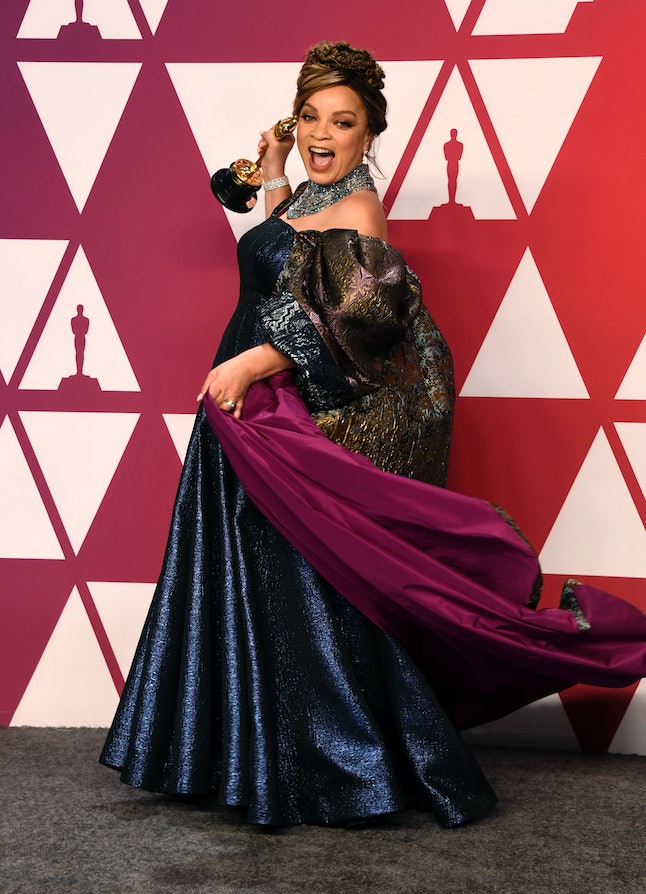 Carter was responsible for all of the looks in the film, from the headwear Bassett’s character Ramonda wears to the now iconic Dora Milaje warrior looks you see all over Instagram. Black Panther is so special not just because it earned seven Oscar nominations or grossed over $1.3 billion at the box office, although those are feats in and of themselves. It also resonated with black audiences in a powerful way, something Carter is especially proud to have been a part of. She told The Hollywood Reporter earlier this year that the Oscar nod was satisfying, but not as satisfying as seeing kids all over the world rocking Black Panther costumes.

"When we designed a superhero that was a black man and a kingdom that was in Africa, it took those children to a place where they could claim and they could fly. And it’s the best honor anybody could ever be bestowed. They knew the spirit and they all secretly hoped some of the Black Panther power would be bestowed on them just by wearing the clothes. … They were so ready for it," she said.

Carter echoed that sentiment in an interview with Entertainment Weekly before the ceremony, too. "It’s such an important film. It made such a mark and I love the costumes myself. For the fans, I’m just so proud that it got recognized by the Academy as well. Sometimes, the fans will love something and the Academy won’t recognize it, so you think, was it big enough or was it great enough? But, it feels like a home run," she said.

Judging by her and Beachley’s historic wins, and the continued love and support for Black Panther it most definitely was.