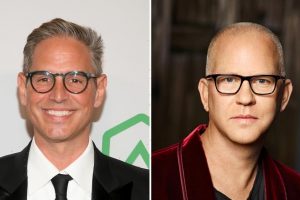 Not unlike the many TV series Ryan Murphy has devoted to the untold histories of Hollywood, the “Glee” creator took the stage at Saturday’s Producers Guild Awards to share some of his own with one of the night’s big honorees: Greg Berlanti.

Presenting Berlanti with the PGA Norman Lear Achievement Award, Murphy delivered a heartfelt and candid tribute to the prolific Berlanti — one packed with sweet and humble beginnings for men who now populate media power lists and highest-paid rankings.

In the late ’90s, Murphy said, he and Berlanti were hungry young screenwriters looking to break into the industry — Murphy a journalist, Berlanti an assistant to a producer). Murphy got his big break first, selling a script to Steven Spielberg for “$30,000 after commissions,” he said.

Berlanti was struggling with a demanding schedule, however, working on his own script in the wee hours and getting nowhere. Murphy decided to use his “Spielberg fortune” to cover Berlanti’s rent for three months, freeing him up to write all day and workshop the script together at night.

“At night, we would often got to a diner on Sunset to talk about the script, the characters, and always what we wanted to do with our lives. I remember Greg really being on fire with this idea, brimming with youth and vitality and purpose,” said Murphy. “It was personal. It was populated exclusively by young men like us, some lost, all were searching for a community. I worried about this script. I told Greg repeatedly, early on, that we couldn’t sell movies or TV shows populated by gay people. No one would make it, it wouldn’t sell and couldn’t we write a nice Sandra Bullock comedy?”

Berlanti persisted, and would eventually sell his first script and eventual directorial debut, “The Broken Hearts Club,” a seminal film about gay friendship. Afterward, Berlanti pivoted to television where he has remained for nearly 25 years, or as Murphy put it, “first ‘Dawson’s Creek,’ then the world.”

Murphy also shared that he gifted Berlanti “a pair of dress shoes for some of his first post-‘Broken Hearts’ pitch meetings. They were in fashion to be sure, but they had square toes. It was 1997. I remember him wearing them for the first time nervous and saying, ‘I look like a goddamn pilgrim. No one is going to hire me wearing these goddamn shoes.’”

But he was hired, said Murphy.

“If you asked me then, would this guy in the Myles Standish shoes become arguably the most successful television producer of the modern age? I would’ve said a resounding yes, because Greg always had it. That thing that makes a star, a business person, and a captain of industry,” Murphy continued. “Charisma, intelligence, integrity, an understanding of the human experience, empathy, killer instinct, and a talent and wisdom far beyond his years.”

Read the full list of winners from the 2022 Producers Guild Awards.