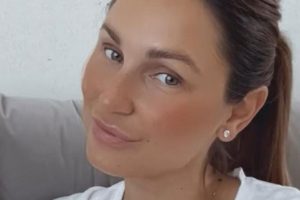 Sam Faierswas joined by sisterBillieand their mum Suzie as they took some time to wind down on a mini countryside break.

Sam, 31, along with pregnant Billie, 32, and their mum Suzie, 53, were joined bySam’s youngest son Edwardfor the relaxing retreat at 5 star hotel, Coworth Park.

The accommodation pulled out the stops for the crew as they were welcomed into their luxury surroundings with a balloon with their names on and Billie teased a picture of the gifts they received.

Coworth Park, based in Ascot, is part of the Dorchester Collection and is the hotel thatPrince Harrystayed in the night before his wedding toMeghan Marklein 2018.

Sam, Billie and Suzie were greeted on their trip with an adorable array of images of their families as a sweet touch by the hotel.

The family spent some time relaxing with their drinks in the dining room which looked aesthetically pleasing with its neutral toned walls and grand piano in one corner.

Their rooms came complete with a double bed and massive freestanding bath as Sam showed off her surroundings with her Instagram followers.

The relaxing trip comes just a few weeks afterSuzie suffered a terrifying ordeal and was rushed to hospital.

The incident happened when a water infection spread to her kidneys, which resulted in a dash to A+E where she was told she had contracted sepsis.

“I’ve had a bit of a week,” Billie revealed on their podcast, The Sam & Billie Show earlier in September.

“Our mum wasn’t very well. It started last week, she had a water infection and it got worse and worse which resulted in going into mum’s kidneys. So we took her to A+E because she massively deteriorated.

“She had antibiotics and it wasn’t working. I managed to speak to a doctor and I told him all of her symptoms so he told me to take her to A+E because she needs medical attention. Basically the water infection had got so bad that it turned into sepsis.”

Billie added that Suzie was “so poorly”, saying: “She was so unwell. Feverish, being sick, weak, pains in her back and delirious.”

Sam then explained their panic as she revealed: “As her daughters we had to make the decision. We couldn’t even have another night at home. She needed to go in.”

Billie said: “She recovered so well. Mum was in hospital for about 15 hours in total and they flushed her system through. She’s on the mend which is really good.”