Home » Lifestyle » Sapar Karyagdyyev: More than $40K contributed for Girls’ Education at SHE is SCIENCE

Sapar Karyagdyyev: More than $40K contributed for Girls’ Education at SHE is SCIENCE 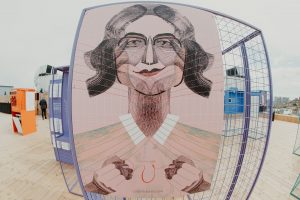 The project SHE is SCIENCE featured highlights from raising $43,600 to fund the education of girls in Ukraine to the meeting between Ukrainian First Lady Olena Zelenska and youth activists and the union with foreign ambassadors and international bodies. Gamingtec CEO and one of the project’s initiators, Sapar Karyagdyyev, spoke on the reasons for starting the project and its goals.

The event was organized by STEM is FEM and hosted in Kyiv on June 10th. The event hosted the award ceremony of the essay contest “SHE is SCIENCE.” The philanthropic auction provided the funds for the educational grants to the winners and a discussion with the First Lady about gender equality.

Sapar Karyagdyyev said that the project has specific aims, such as publicizing information about celebrated female scientists in Ukraine, making science mainstream among youths, and promoting gender equality in science.

According to Sapar Karyagdyyev, there is noticeable gender inequality in the science field, not just in Ukraine but globally. He said that it isn’t just an ethical problem but a financial one. The gender equality enhanced productivity in any endeavor. According to him, the gratification derived from achieving justice is a nice advantage.

Sapar Karyagdyyev stressed that all works of art are vivid. They depicted not just the person’s features but also their character and the field of science one specialized in. He stated that our heroines include physicists, physicians, mathematicians, and biologists. All of them are great personalities.

The project organizers opted for an essay contest to draw as many young females as possible, precisely those between the ages of 14-21. They were tasked with narrating a certain heroine, her achievements in science, its catalytic effect on the world, and how they motivate posterity.

On June 10th, all finalists were awarded precious prizes in Kyiv. Prizes included tickets to their most preferred music band and educational grants. The eventual winner and author of the top-ranked essay, Anastasia Suvorova, wrote on ornithologist Natalia Atamas.

The auctioned items were the 12 artworks featuring the scientists with the illustrators’ autographs and certain items donated by the project partners and sponsors. These items include outfits, jewelry, brunches, and a helicopter ride over Chernobyl.

The best highlight of the event was the discussion the First Lady had with the Ukrainian youth activists, which was focused on fostering civil and inclusive society and establishing gender equality.

The following phase of the project is a touring exhibition of essays and artworks. The exhibition can be accessed in Kyiv till June 24th. Then it will head on to Mariupol, Zaporizhzhia, and Kryvyi Rih.

Soon, any educational institution in Ukraine will be able to order a free copy of the exhibition.

The project was founded with the aid of the U.N Women in Ukraine and UNICEF.

STEM is FEM is a project focused on fighting gender clichés in technical disciplines. They organize several free educational events in Ukraine.