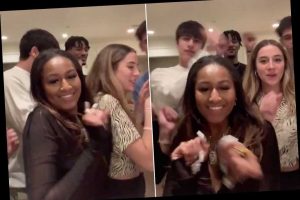 The Obamas are living it up in Bali

The 15-second video, set to artist Popp Hunna’s 2020 track “Adderall (Corvette Corvette),” shows Sasha in front of about seven people, all unmasked and inside what appears to be a kitchen. The group performs a relatively rehearsed-looking dance in the video, which begins with Sasha and her pals singing the word “b–ch.”

The TikTok video was posted by one of the dancers in the clip, not Sasha, and the original post has since been taken down.

“Sasha Obama about to make this girl’s TikTok viral,” another viewer reacted.

The 19-year-old former first daughter is currently an undergraduate student at the University of Michigan, where she started last fall.

Sasha — whose full name is Natasha — and sister Malia, 22, recently gave Netflix unprecedented access to their private lives for their mom Michelle’s documentary “Becoming,” which came out May 6 and is based on the former first lady’s best-selling memoir of the same name.

“I’m excited for her to be proud of what she’s done,” Sasha told O, the Oprah Magazine ahead of the doc’s release. “Because I think that that’s the most important thing for a human to do, is be proud of themselves.”

More recently, Barack praised Sasha, Malia and Michelle for being “badass” in an interview with InStyle. “They all have multiple badass qualities,” he said in the rare interview about his family. “Sasha is, as Malia describes it, completely confident about her own take on the world and is not cowed or intimidated — and never has been — by anybody’s titles, anybody’s credentials. If she thinks something’s wrong or right, she will say so.”

He then recalled an incident when the family was visiting Russia when Sasha was a child and she refused to taste caviar. “She was like, ‘Mnn-nnh. No. Sorry. That looks slimy.’”

END_OF_DOCUMENT_TOKEN_TO_BE_REPLACED

END_OF_DOCUMENT_TOKEN_TO_BE_REPLACED
We and our partners use cookies on this site to improve our service, perform analytics, personalize advertising, measure advertising performance, and remember website preferences.Ok