In the creepy video, the gigantic clown tat is seen sprawled across Hendrik Schönenberg’s back.

It appears bloodied in complexion – with its eyes being surrounded by open flesh and its smile distorted.

But when the unnamed man moves his back, it gets even scarier.

The scary clown’s face begins moving – giving the complexion it is leering at the camera.

Tattoo artists and pals Torsten Malm, 33, Adrian Ciercoles, 32, Moriel Seror and Kätlin Malm, both 31, collaborated on the design together before inking up their client with the gory art.

It took the four of them almost 30 hours to create the incredible inking.

Kätlin, from Estonia, said: “People are mainly baffled that you can actually possible do a tattoo like this.

“A lot of people were scared and disgusted by it too – but that’s exactly the reaction that you would expect for a creepy clown tattoo. It told us we’d done our job. 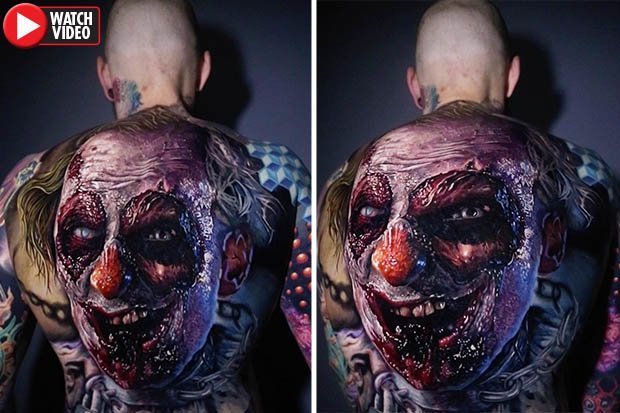 “I think we were pleased that you couldn’t tell which part was done by what artist. It looks like a complete piece made by one artist. We couldn’t be happier with the end result.

“All four of us have amazing chemistry and we work together like a well-oiled machine. We’re looking forward to working together as a group again soon.”

Adrian, from Spain, praised Hendrik for being able to crack jokes all the way through “even though he was in a lot of pain”.

It comes after a man was left distraught after paying £80 for a “piece of s***” tattoo that looked like it had been done by a child.