Home » Lifestyle » Schoolgirl, 17, who is sick every hour forced to fund own operation

Schoolgirl, 17, who is sick every hour forced to fund own operation 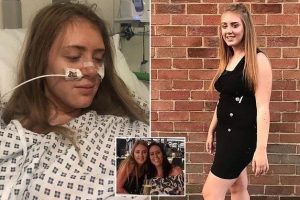 Schoolgirl, 17, who is sick every HOUR due to condition which means her stomach is unable to empty itself of food is forced to fundraise £35,000 to have a gastric pacemaker fitted because NHS doesn’t cover operation

A schoolgirl who is sick almost every hour is being forced to crowdfund £35,000 for a life-changing operation – because it’s not covered by the NHS.

Lucy Woolley, 17, from Bromley, Greater London, suffers from gastroparesis, which means her stomach is unable to naturally empty itself of food, leaving her in a constant state of nausea.

The condition results in her being sick around 12 times a day – the equivalent of almost each hour she’s awake – and she has not had a full day at school or sixth form in three years.

The teenager has seen her weight plummet thanks to the gruelling condition and she is so scared of going into a sickness ‘coma’ that she is unable to do normal things such as go on holiday. 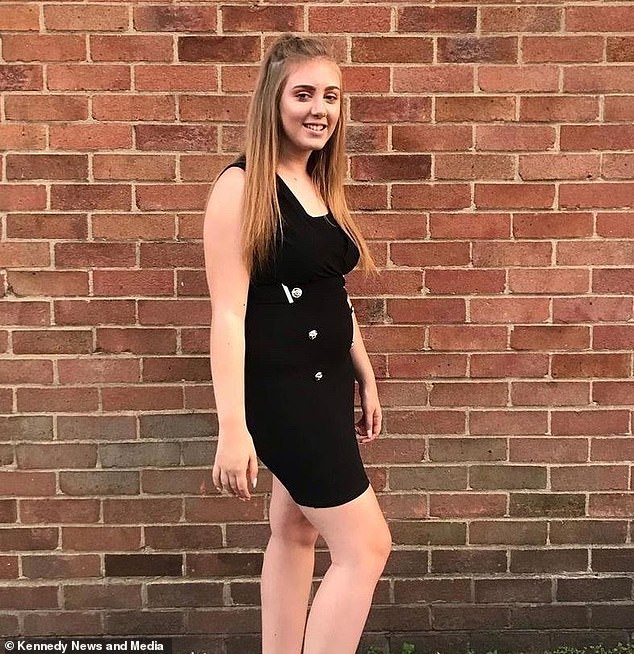 Lucy Woolley (pictured), 17, from Bromley, Greater London, suffers from gastroparesis, which means her stomach is unable to naturally empty itself of food

However, Lucy’s hopes for a normal life were dashed when doctors told the teen and her mother Lynne Woolley last May that the gastric pacemaker that would regulate her stomach is not available on the NHS.

Instead, the family are having to crowdfund for the vital operation that they hope will provide the ‘off-switch’ for her constant sickness and allow her to live her life again.

They are looking to have the surgery for her pacemaker done privately and have set up a GoFundMe page, having so far raised over £2,000 towards the £35,000 goal needed for the operation.

‘Lucy doesn’t go out by herself. She’s frightened that she’ll go into a conscious coma, and she won’t be able to tell people what’s wrong,’ said Lynne, 45.

‘She doesn’t live the life of a normal 17-year-old girl, because she can’t go out with friends. 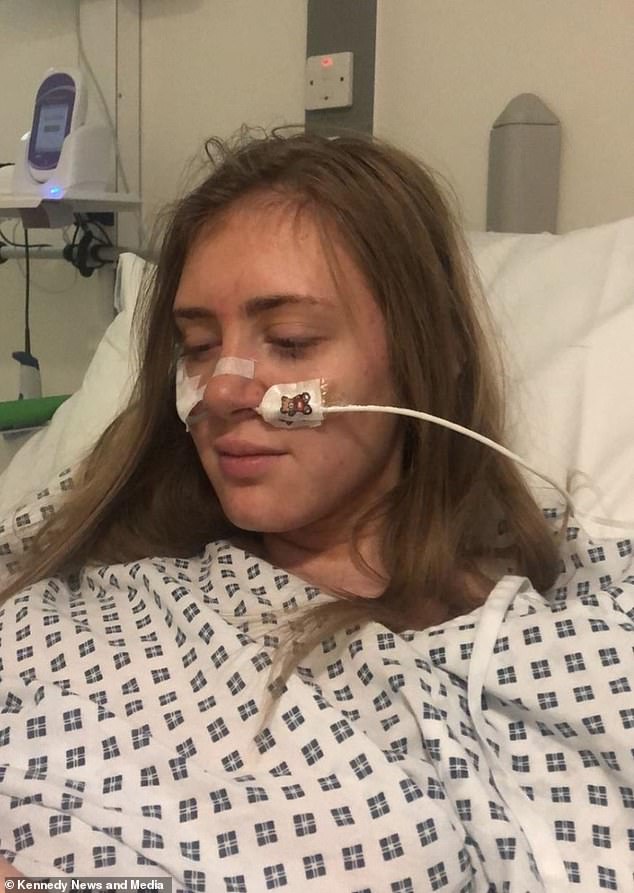 The condition leaves the teenager in a constant state of nausea and results in her being sick around 12 times a day – the equivalent of almost each hour she’s awake. Pictured, in hospital

Gastroparesis affects the normal movements of muscles in the stomach, preventing it from emptying properly.

It affects more than 1.5 million people in the US to some extent. Up to four per cent of people suffer in the UK.

Due to the condition affecting digestion, it can cause nausea and vomiting, as well as problems with people’s blood-sugar levels and receiving adequate nutrition.

Other symptoms may include:

Gastroparesis can occur as a complication of diabetes, or after surgery or an infection.

It is believed to be caused due to damage to a nerve that controls stomach muscles.

Certain medications, such as antidepressants or pain relievers, can slow gastric emptying and cause similar symptoms.

Complications can include severe dehydration from vomiting, malnutrition, a reduced quality of life and undigested food hardening in the stomach, which can be life threatening.

There is no cure. Treatment focuses on dietary changes, such as eating smaller meals more frequently and chewing thoroughly.

Medications can help to ease nausea and vomiting.

Surgery to fit a feeding tube may be required if patients are unable to tolerate any food or liquids.

‘I know there’s a lot of people who are worse off – there are some who have feeding tubes. But the weight’s just been dropping off her, she looks very poorly. It’s constantly difficult. Lucy does have good days, but she has more bad than good.

‘The doctor had said [the gastric pacemaker] wouldn’t cure it, as there is no cure for gastroparesis. But he said it’d be like an ‘off switch’ for her nausea.

‘That was in May of last year, and we knew things were going to be slow because of COVID.

‘We knew there’d be a problem with the funding but we didn’t realise it would suddenly become unavailable out of nowhere.’

Lucy has been experiencing problems with nausea from an early age.

Lynne, who divides her time between her job as a carer and looking after Lucy, said: ‘She always suffered from reflux, but that’s quite common in babies so I didn’t think much of it.

‘But the first time she went into hospital, she was three. She had to be taken in to be rehydrated because she just couldn’t keep anything down. She’d have lots of tests but everything would come back normal.

‘There would be gaps of a few years between her hospital admissions, but she was always a poorly child, always suffering from headaches.

‘She always had tummy aches too – they thought she might have an abdominal migraine.

‘The turning point for us came in December 2011, when she was admitted to hospital with what we thought was a gastric bug.

‘But once she was rehydrated, we were told she could come home, which we were a bit reluctant to do.

‘My husband went upstairs to check on her, and she wasn’t quite with it, because she goes into conscious comas, as we’d later find out.

‘That means that when she’s being sick, she can’t speak to us. We tried giving her a drink, but it all just dribbled down her face. It was then we noticed she was having a seizure.

‘She was taken back to hospital and given a CT scan, where they diagnosed her with hypertensive encephalopathy, which was caused by her blood pressure rising so high.

‘She was ventilated and moved to intensive care at St. George’s hospital, before she came back to our local after two days. 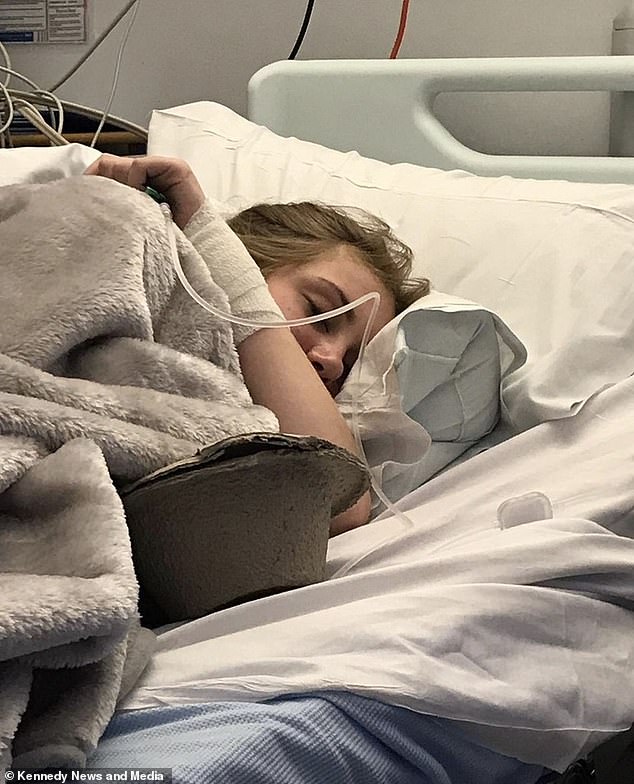 However, a life-changing operation to insert a gastric pacemaker which would regulate her stomach and provide the ‘off-switch’ for her constant sickness, is not covered by the NHS. Pictured, in hospital 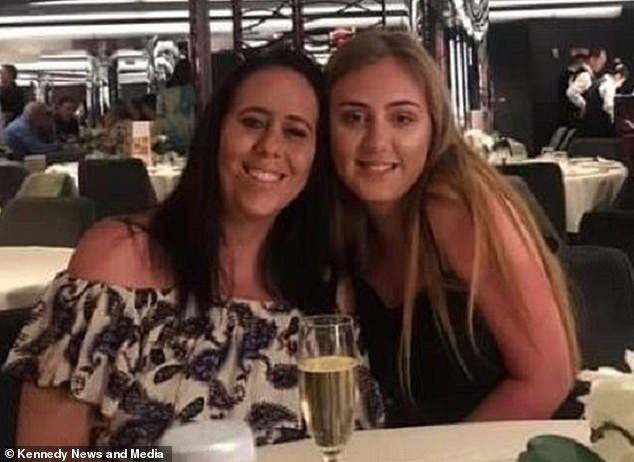 Her family have set up a GoFundMe to raise £35,000 to pay for the surgery privately as they hope it will give the teen a normal life (Pictured with her mother Lynne Woolley, 45, left)

‘Her blood pressure was still high so she was taken to the Evelina London Children’s Hospital.

‘She was put with the cardiologists, the renal team and the neurologists, and I remember them telling me that she was one of the sickest children there. But they just couldn’t find out what was wrong with her.’

Lucy’s ill health continued over the next few years, when she underwent an operation to remove her appendix in September 2012.

‘She would have stomach aches over the next few years, but generally things were okay. It would come and go, whereas now it’s daily,’ explained Lynne. ‘But then in October 2018, she got really poorly out of nowhere.

‘When we went to the hospital, they found a mass outside her ovaries so she had an operation in King’s College Hospital to remove the cyst. 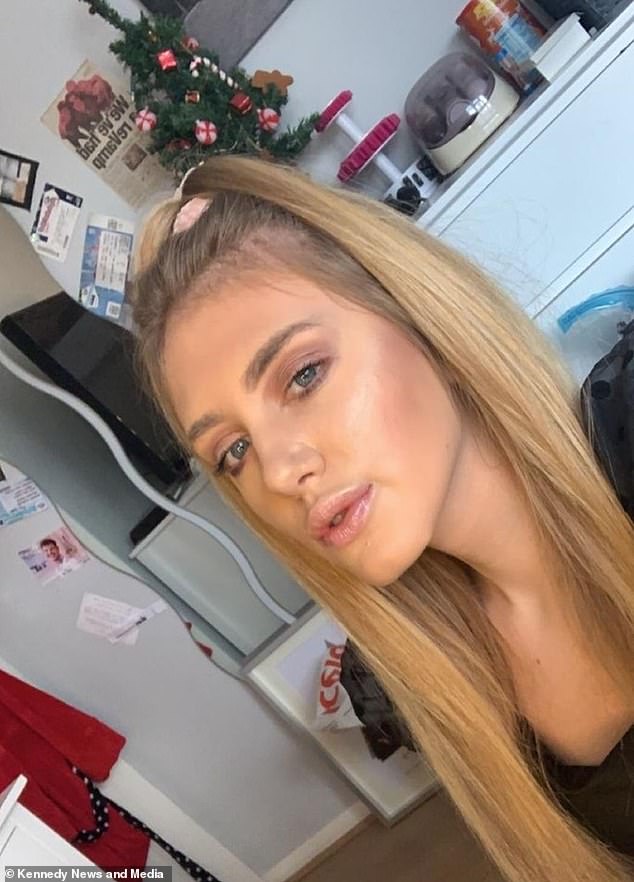 ‘But she carried on being sick, so we realised that the cyst wasn’t the cause of the nausea. It was around this time that Lucy was diagnosed with cyclical vomiting syndrome (CVS).

‘We think that she just has mild symptoms of it, but children with CVS often have gastroparesis. They go hand-in-hand.’

For the next year and a half, Lucy was on different anti-sickness medication, but showed no signs of improvement.

Lynne sought out specialists who dealt with CVS and brought Lucy to see one at Great Ormond Street Hospital.

Lucy’s cousin had been suffering from gastroparesis at the time, so Lynne requested that her daughter be tested for the condition.

Lucy underwent an endoscopy, barium swallow and an emptying test, through which she was diagnosed with gastroparesis in May 2020.

Her bowels were found to be ‘sluggish’ but still in working condition – meaning she could be put forward for a gastric pacemaker.

However, the family’s hopes were dashed when it was revealed that the NHS would not fund the operation – prompting them to launch a petition to change this.

Lucy’s illness has had a massive impact on all aspects of her life as her mother Lynne said: ‘If we’re not fighting her medical condition, we’re fighting her mental health. 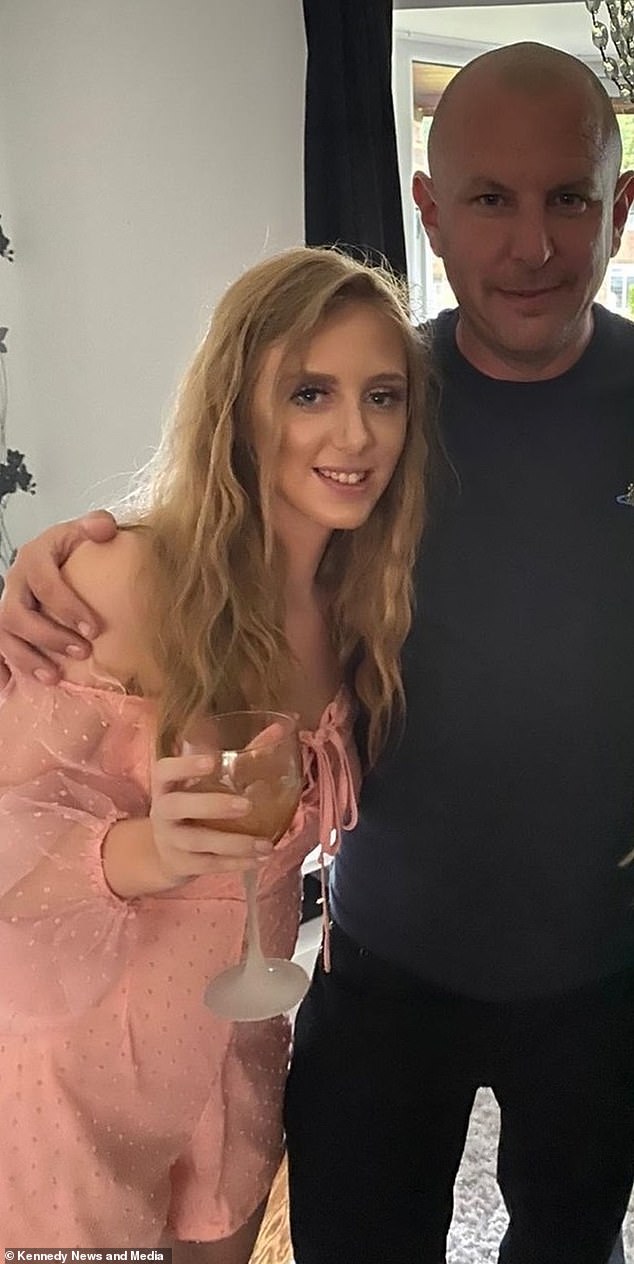 As well as crowdfunding for the surgery, the family have set up a petition to get treatments for gastroparesis funded on the NHS (Lucy pictured with her father Pete Woolley)

‘I would say she’s probably not had a full day at school since her hospital admission in 2018.

‘She’s managed to pass her GCSEs, her school has been brilliant and sent a lot of her work home.’

Lucy and her family are now looking to have the surgery for her pacemaker done privately, and have set up a GoFundMe page to raise the £35,000 needed.

‘Having this surgery would just mean that we don’t have this fear when we go on holiday,’ Lynne explained.

‘We don’t go on holiday – she’s frightened to be too far away from home because she could fall ill at any time.

‘It’d be nice to be able to do normal things. She can’t go on family walks because she isn’t fit enough to walk these long distances.

‘My niece has set up a petition to get treatments for Gastroparesis funded on the NHS and we are hoping to get an appointment with our Local MP.’ 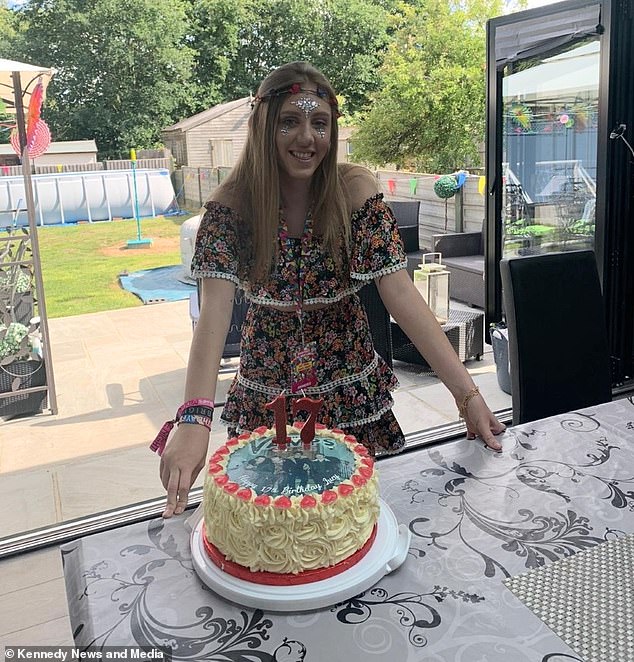 The crowdfunder has already raised over £2,000 towards the £35,000 goal to undergo surgery for a gastric pacemaker and hopefully allow the 17-year-old to live a normal life again

The NHS website states: ‘The effectiveness of this treatment [Electrical stimulation/Gastric Pacemaker] can vary considerably.

‘Not everyone will respond to it, and for many people who do respond, the effect will largely wear off within 12 months. This means electrical stimulation is not suitable for everyone with gastroparesis.

‘There’s also a small chance of this procedure leading to complications that would require removing the device, such as: infection, the device dislodging and moving, [and] a hole forming in your stomach wall.’

NHS England confirmed that a Clinical Commissioning Group Policy they published in 2016 confirmed there was ‘not enough evidence’ to support routine use of the treatment and it would require individual funding requests to be submitted on behalf of the patient.

‘We have concluded that there is not enough evidence to make the treatment available at this time.’

You can donate to Lucy’s GoFundMe campaign here and sign the family’s petition calling for treatments of gastroparesis to be funded on the NHS here.