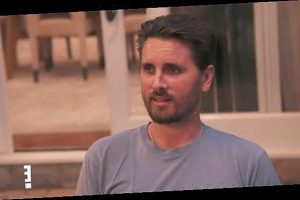 Scott Disick left Kourtney Kardashian speechless after he nearly proposed to her at a family dinner in the latest preview for the final season of ‘Keeping Up With The Kardashians.’

Could Scott Disick and Kourtney Kardashian finally be headed down the aisle? Well, it doesn’t exactly look that way. In a new preview for the final season of Keeping Up With The Kardashians, Scott, Kourt, and more members of the Kardashian clan come together for a family dinner. While reflecting on how they cannot believe that they are filming “season 20 in 2020,” a hush falls over the family before Kim Kardashian finally gets a conversation rolling.

“Kourtney and Scott, so when are you guys going to get back together?” Scott, however, plays the whole thing very diplomatically. “Wherever Kourt stands, I stand with her,” he says. Kourt acknowledges how “nice” it is to hear such affirming words from her former partner. But the family is still all about the idea of a Kourtney and Scott wedding!

“Can we just have a Kourtney and Scott wedding? That would be epic!” Kim says at the table, slamming her hand on the table for emphasis. Nearly everyone but seemingly Scott and Kourtney are all about the idea, urging Scott to “propose” right at the dinner table! “Scott, if you could just [find it] within yourself to go over there and get on one knee and propose, we’ll have the wedding. It’ll be amazing,” matriarch Kris Jenner assures the former flames and current co-parents.

While Kourtney remains hesitant, Scott nearly takes up the offer. “Well, I love ya,” he sweetly says to Kourt, with whom he shares three children — Mason, 11, Penelope, 8, and Reign, 6. “And I’m ready to marry you right here, right now.” Everyone at the table is noticeably shocked, especially Kourtney. “Kourtney knows that eventually we’ll get married and live a good life,” Scott assures everyone. But Kourt isn’t wholly convinced.

“Or, when you wanna work on yourself,” she quietly says to her former partner. “Are you giving him an ultimatum right now?” Khloe Kardashian asks her big sister. “I would love to know what I can do,” Scott earnestly says in reply. But before fans can learn more, the preview ends! Although the new clip does present a bit of cliffhanger for the new season, fans already have some idea of how the conversation ended.

Within the last few months, Kourtney and Scott have moved on to new relationships. Scott has been linked to Amelia Hamlin since November 2020, while Kourtney recently confirmed her romance with Travis Barker in February 2021. But Scott and Kourt will always be in each other’s lives as they continue to co-parent their three youngsters. Regardless, we cannot wait to see how this storyline pans out on the final season of Keeping Up With The Kardashians!

The final season of “Keeping Up With the Kardashians” premieres Thursday, March 18 at 8:00pm ET/PT on E!.