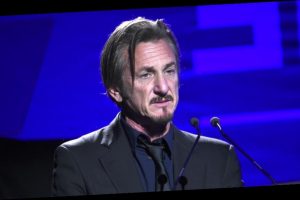 The lineup will include Penn, Jennifer Aniston, Shia LaBeouf, Matthew McConaughey, Julia Roberts, Dane Cook, Morgan Freeman and Henry Golding, with more names to be announced over the next week.

“Fast Times” director Amy Heckerling and screenwriter Cameron Crowe will also be on hand to introduce the reading.

Penn will not be playing his iconic stoner character Jeff Spicoli. The actors’ characters will be announced on the night of the event.

“On behalf of our dedicated team at CORE, I’m so appreciative of the support Dane has given and continues to give to our work,” Penn, co-founder of CORE, said in statement. “I’m always game for a giggle. So, to gather remotely for a night of laughs with so many talented folks while providing CORE with much-needed resources to continue our vital work, then consider us fully onboard to play!” When asked why he won’t be revisiting his original role, Penn said, “I’m very confident in the new guy.”

Executive produced by Cook and Ivan Dudynsky, the table read is presented in association with Deviants Media Inc. and JWP, and sponsored by SnackPop.com.

“Sean brought magic to us on day one, and he is still bringing that magic to the world. We are so excited to be a part of this 2020 take on ‘Fast Times at Ridgemont High,’” Crowe said. “Thank you to this cast, and to Sean, for always honoring the best things in life, love and creativity. It is, as a great man once said, totally awesome.”

Heckerling added, “I’m honored that so many talented, wonderful people are willing to get together to celebrate our movie, and to create their own special version of it. And I’m a huge fan of Sean. He has such a big heart and I fully support CORE and all of his causes.”

END_OF_DOCUMENT_TOKEN_TO_BE_REPLACED

END_OF_DOCUMENT_TOKEN_TO_BE_REPLACED
We and our partners use cookies on this site to improve our service, perform analytics, personalize advertising, measure advertising performance, and remember website preferences.Ok