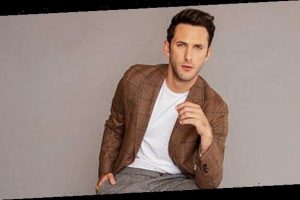 You know the saying ‘Men are from Mars and Women are from Venus?’ It still stands true today as men and women continue to face to difficulty in understanding what each other want when it comes to a relationship. Sebastian Zurita tackles this phenomenon and modern day dating in his new Amazon Prime Video series, Cómo Sobrevivir Soltero (How to Survive Being Single). The series follows a newly single Sebastian and real-life occurrences that himself and his friends endured while navigating the modern dating scene.

“We had to go into the writers room and tried to convince them that I’m really bad at trying to pick up a girl,” he laughed in an EXCLUSIVE interview with HollywoodLife.com. “Honestly, it’s nerve racking for me like to approach a girl. Like, how do I make an impact on someone in a bar? When already five dudes came up to her and one was drunk, one was obnoxious and the other one was entitled, and I need to prove that I’m the good guy.”

He added that the show goes through all the questions we ask ourselves as singles in this world. “I think the concept of love has changed so much lately that people move on from relationships faster because times have changed,” Sebastian said. “But the truth is, I am a romantic and at the end of the day, I do think there’s someone out there for everyone. You just have to find them.”

In the end, he said that he doesn’t think “girls or guys know what they want” when it comes to a relationship, and that’s what makes Cómo Sobrevivir Soltero so relatable. Plus, in an unprecedented move in an effort to model after the American scripted series versus Latin American, Sebastian filled his writers’ room with 6 writers — 3 men and 3 women. “The main idea in the writers’ room was like, ‘Okay, what do the the girls think that guys think and what do the guys think girls think? And now, let’s disprove all of that.’”

Cómo Sobrevivir Soltero (How to Survive Being Single) premieres on Amazon Prime Video on June 26th!