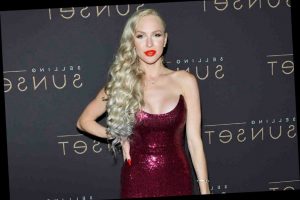 Christine Quinn has been dealing with her ailing mother as she prepares for the Season 3 premiere of  “Selling Sunset.”

The Netflix star exclusively told Page Six her mom Barbara Dragony is in the hospital after suffering a heart attack last week.

“It’s just really hard because no one is allowed to visit,” Quinn, 31, told us, getting emotional. “My dad and my sister can’t even visit, so it’s really hard right now because of corona. They won’t let anyone in.”

The “Selling Sunset” star said her mom has had battled illnesses like lupus, Raynaud’s syndrome, and rheumatoid arthritis, which have caused her mom’s hands to fuse together, for years.

Dragony, 60, also survived breast cancer twice at age 40 and 41, has had spinal surgery, and heart surgery before her daughter’s wedding.

“She’s been sick my whole life,” Quinn said. “It’s just something that I’ve dealt with, but on top of not even being able to see her is really hard right now.”

Aside from her mom’s medical struggles, the real estate agent has dealt with health issues of her own. She recently revealed she may have had coronavirus on her wedding day.

The reality star said she tested positive in an antibodies test. Her husband’s test results came back negative, despite also experiencing some symptoms.

“I was so sick. I remember taking two steroids and trying to get through my wedding, and it was so hard,” Quinn said. “I actually was going upstairs and taking breaks in the dressing room because it was physically exhausting for me to stand for so long.”

We are so excited to officially announce Season 2 of Selling Sunset. It will launch May 22 and we can’t wait for you all to binge it with us! We laughed, we cried, new friendships were formed, and some fell apart. In addition to a new cast member, this season was so real and raw. We shared so much more of our personal lives with each and everyone one of you, so I hope you appreciate getting to know us on a deeper level. This season is bigger and better than ever with no drama spared. Get ready for an entertaining and inspirational wild ride because Season 2 is almost here! Comment below with your predictions for season 2! 🌟 Love, Christine

The “Selling Sunset” star and her husband, Christian Richard, tied the knot in a gothic, winter wonderland wedding on Dec. 15, which will be shown on Season 3.

Quinn told us she thinks she may have contracted the deadly virus while on trips to Dubai or Hong Kong in December.

“We came back and were feeling very sick,” she said. “It wasn’t a cold. It was like a cold, but so much different. I couldn’t breathe, and I have a mini-fridge by my bed that’s 10 feet away and even to go get a water out of the vending machine fridge was so exhausting. I couldn’t do stairs, and I was out of breath. Even talking on the phone was just exhausting to me.”

Quinn said she was filming while sick, which was a challenge because she would “crash” at points and have to be on bed rest for two days.

“It was horrible, so I thought it was a cold,” she said. “I was on two rounds of antibiotics. I was on steroids. Nothing was kicking it out. I was sick for a good month and a half, probably.”