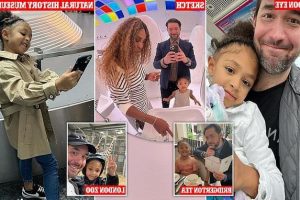 Serena Williams’ girl takes London! How Olympia Ohanian, 4, has enjoyed a Bridgerton afternoon tea and a trip to the Natural History Museum after her mother crashed out of Wimbledon

Serena Williams’ Wimbledon journey was cut short after she was knocked out in her first round match, but that hasn’t stopped her four-year-old daughter from making the most of her time in London.

Alexis Olympia Ohanian, known as Olympia, travelled to the UK with her mother and father, Reddit founder Alexis Ohanian, ahead of the two-week tennis tournament.

Although they family has spent less time at the All England Club than they had planned, it has meant they’ve been able to take in the sights of the capital, making trips to tourist hotspots like the Natural History Museum and the London Eye. 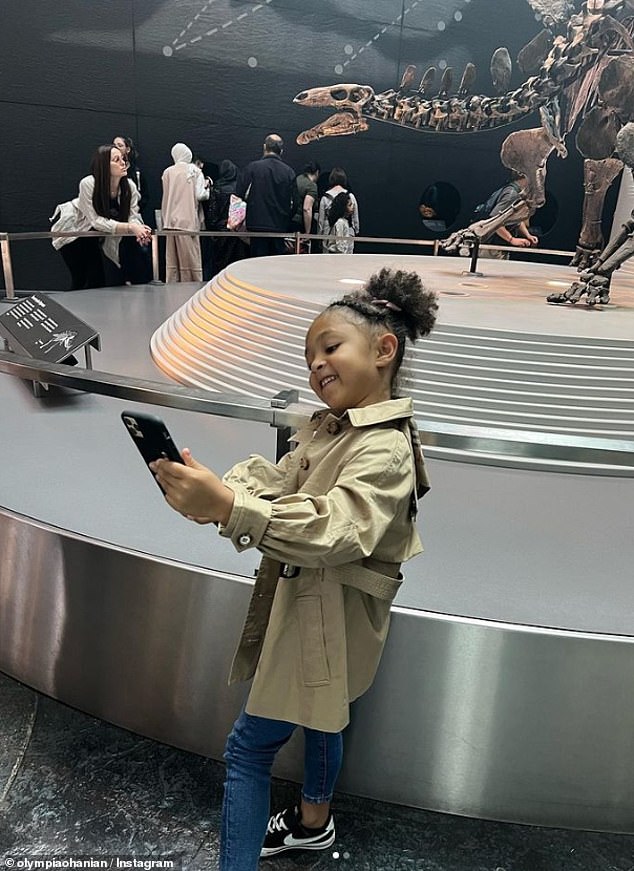 But first, let me take a selfie! Alexis Olympia Ohanian, known as Olympia, travelled to the UK with her mother and father, Reddit founder Alexis Ohanian, ahead of the two-week tennis tournament. She enjoyed a trip to the Natural History Museum, pictured 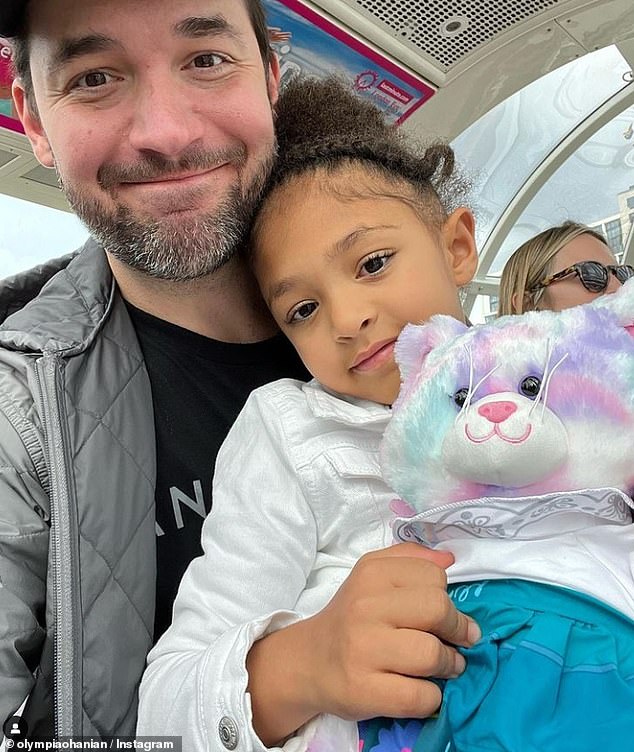 Low profile: Olympia and her father Alexis, who has an estimated net worth of $40million, stayed under the radar as they took in the sights of London from the London Eye 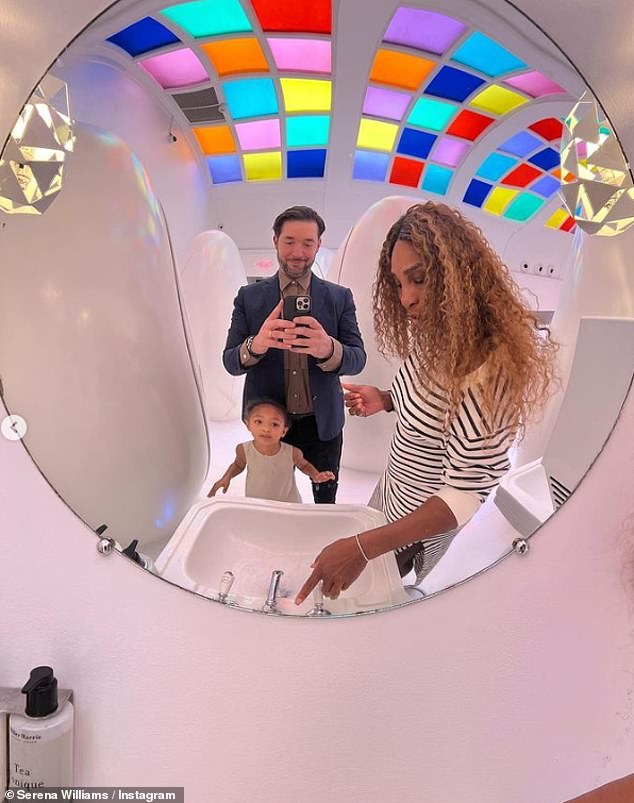 Family photo! The four-year-old also tucked into finger food at trendy restaurant Sketch where a children’s afternoon tea costs £40. Pictured, the family snap a picture in the bathroom

Olympia, the couple’s only child, posed up a storm in front of the giraffes at London Zoo and has joined her parents for at least three afternoon teas, including a £65-a-head Bridgerton experience at the five-star Lanesborough hotel in Knightsbridge.

Serena, 40, and Alexis, 39, also made time for date night and stepped out for the star-studded Thor: Love And Thunder premiere.

The tennis ace suffered heartbreak as she was beaten by Harmony Tan, 24, in her opening match in what might be her last ever Wimbledon appearance. 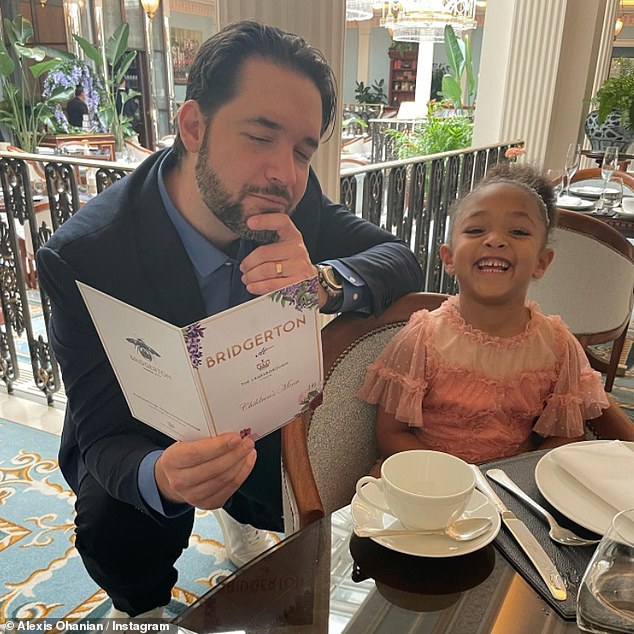 Time for tea! Olympia joined her parents for at least three afternoon teas, including a £65-a-head Bridgerton experience at the five-star Lanesborough hotel in Knightsbridge, pictured

Fit for a princess! Four-year-old Olympia wore a pretty pink frilly dress for the family outing 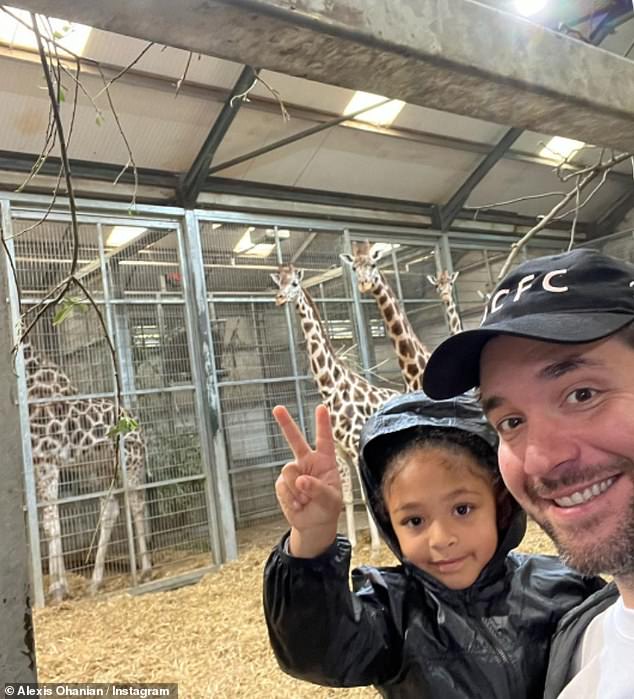 Say hi to the giraffes! Alexis and Olympia took a photo with some giraffes, believed to be at London Zoo or ZSL Whipsnade Zoo 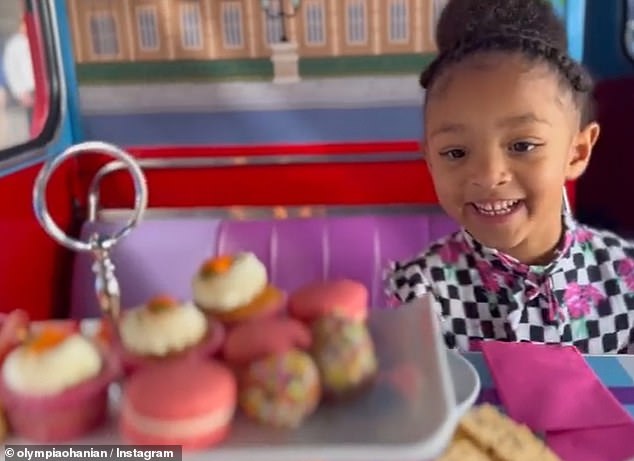 Bite-sized delights! The proud parents shared another clip of Olympia at a third afternoon tea

Afterwards she was non-committal about her future when asked: ‘That’s a question I can’t answer,’ she replied.

‘I’m just playing for right now and seeing how I feel, take it from there. Who knows where I will pop? There’s definitely lots of motivation to play better and at home (the US Open).

‘Physically I did pretty good. The last couple of points I was really suffering. If you are playing week in week out there’s a bit more match toughness.’

It is possible she will choose to spend more time with her child, husband, venture capital business, Oscars ceremonies and plethora of other interests. 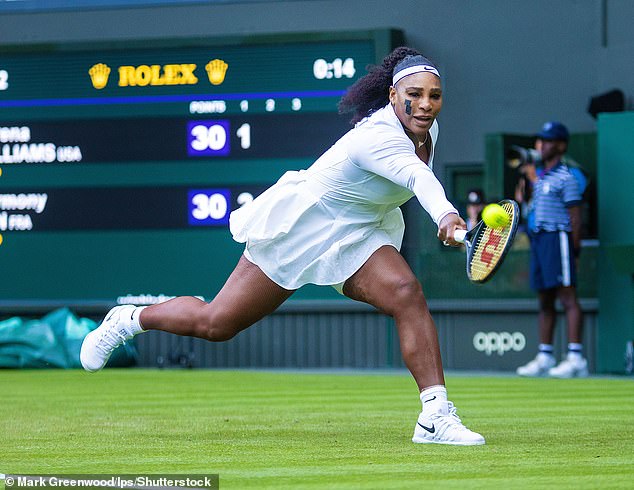 Disappointment: Serena Williams’ Wimbledon journey was cut short after she was knocked out in her first round match, pictured

During a recent interview on the Today show, Serena candidly discussed the way she is able to balance her career as a world-class tennis star with her home life.

‘I don’t know how moms do it. I work a lot, and I can’t imagine working a full day like most working women and then go back to their babies,’ she said.

‘I’m fortunate enough that I have days off, and I get to make my schedule and then can spend the rest of the day with her. And that’s still hard.’

Serena and Alexis tied the knot at a star-studded New Orleans wedding in November 2017, two months after their daughter was born. 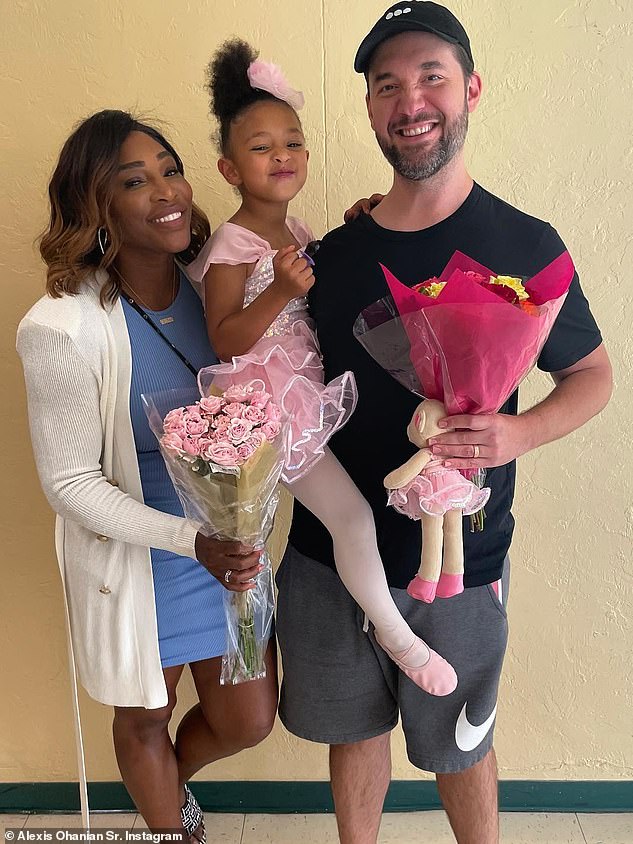 During the coronavirus lockdowns in Serena revealed on Insta Stories that little Olympia has been signed up for tennis lessons herself.

However she made sure the teacher had ‘no idea’ she was the daughter of one of the greatest players of all time, and the niece of another.

She also said she would leave the lessons immediately after dropping Olympia off so as not to be an ‘overprotective’ or ‘distracting’ influence.