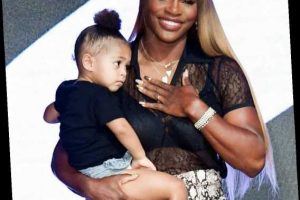 Serena Williams shares her gratitude for her health and physique in a new cover story for British Vogue.

It all comes back to Olympia.

Even though she's one of the world's greatest athletes, Serena Williams is no stranger to struggling with body positivity. She tells British Vogue for their October 2020 cover story that prior to welcoming her daughter, Alexis Olympia Ohanian Jr., with husband Alexis Ohanian, she never fully appreciated her body.

She explains, "When I was growing up, what was celebrated was different. [Older sister] Venus looked more like what is really acceptable: she has incredibly long legs, she's really, really thin. I didn't see people on TV that looked like me, who were thick. There wasn't positive body image. It was a different age."

But that all changed when she became a mother. The tennis star says that was when she realized how much of a gift her physique is. "How amazing that my body has been able to give me the career that I've had, and I'm really thankful for it. I only wish I had been thankful sooner," she shares. "It just all comes full circle when I look at my daughter."

But the Olympian has never felt uncomfortable being a Black woman, despite the inequities she's had to face. She says, "I wouldn't want it any other way."

"Underpaid, undervalued," she says of her career, before noting, "I've never been a person that has been like, ‘I want to be a different color' or ‘I want my skin tone to be lighter.' I like who I am, I like how I look, and I love representing the beautiful dark women out there. For me, it's perfect."

And part of that pride is because her skin color and gender has allowed her to pave a path for the women and men that will come after her. She explains, "In this society, women are not taught or expected to be that future leader or future CEO. The narrative has to change. And maybe it doesn't get better in time for me, but someone in my position can show women and people of colour that we have a voice, because lord knows I use mine. I love sticking up for people and supporting women. Being the voice that millions of people don't have."

The adversity she faced as a Black woman in a predominantly white field was acknowledged earlier this year, amid the protests over George Floyd's death. She says that some of her associates sent her messages apologizing for her past experiences.

She reflects, "I think for a minute they started—not to understand, because I don't think you can understand—but they started to see. I was like: 'Well, you didn't see any of this before? I've been talking about this my whole career. It's been one thing after another.'"

Nonetheless, the star remains grateful for her husband and her daughter, who cheered her on from the sidelines of the U.S. Open court this summer.

Last week, Serena confirmed she wouldn't be competing at the French Open, citing an Achilles injury. She wrote on Instagram, "Paris- I love you don't worry. I'll be back- love you all thanks for the support. Out but not for long."

Read the full feature in the November issue of British Vogue available via digital download and on newsstands Friday, Oct. 9.

END_OF_DOCUMENT_TOKEN_TO_BE_REPLACED

END_OF_DOCUMENT_TOKEN_TO_BE_REPLACED
We and our partners use cookies on this site to improve our service, perform analytics, personalize advertising, measure advertising performance, and remember website preferences.Ok