'Sex and the City': Carrie Bradshaw Was The Female Antihero Television Audiences Needed 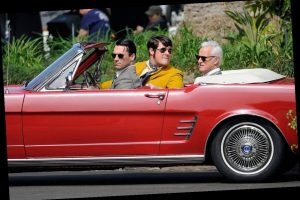 With talk of a Sex and the City reboot clamoring across the internet, fans have mixed emotions. Some want to see Sarah Jessica Parker reprise her iconic role as Carrie Bradshaw just one more time. Others fear a reboot will destroy the sanctity of the series. Sex and the City, today, might be viewed as vapid and unimportant. However, in the late 1990s and early 2000s, it made a statement, and the statement was an important one. Carrie Bradshaw was the first true female antihero, and she was exactly what television audiences needed to see at that moment.

Male antiheroes are a dime a dozen

Male antiheroes are not particularly uncommon in television. They come in all shapes and sizes and from all walks of life. In fact, if you think a little bit, you can likely name five characters who would be considered antiheroes. Those five characters would probably have one thing in common; they would all be males. At the very least, they would be if you were thinking of shows that premiered before 2000.

Don Draper of Mad Men is an interesting example of an antihero. The series attempted to hide his grittier qualities for as long as possible. Dexter Morgan of Dexter is another solid example. Before both came George Costanza. George wasn’t the title character of Seinfeld, but his inherent flaws made him the perfect example of a hapless antihero. They are characters who, while incredibly flawed, are still sympathetic and likable. Before Carrie Bradshaw, networks hadn’t figured out how to craft a female character who was both gritty and likable, so they didn’t really bother.

How was Carrie Bradshaw an antihero?

When Sex and the City premiered way back in 1998, the show was a massive success. It helped build an audience for HBO, alongside other hit shows like The Sopranos and Entourage. Fans clamored to figure out which character they were, and in that era, everyone wanted to be Carrie. Twenty-two years after its premiere, the shine has worn off of Carrie, and fans of the series can finally see her for what she was. Carrie was selfish, irresponsible, and a little flighty.

That doesn’t mean Carrie was a bad character, though. She was important. The New Yorker dubbed Carrie the very first female antihero, and for all her flaws, we loved her anyway. She was the first single woman on television who wasn’t perpetually perky and warm, nor was she cold and unfeeling. She was neither marriage obsessed nor commitment-phobic. Carrie was truly complex, and she represented a change in how society viewed single women.

Could a reboot bring anything new to the table?

Sex and the City’s gritty and honest content matter was shocking in 1998, and the way it allowed the women to approach sex and dating opened the door for all the shows that came after it. Even now, the show has value and remains beloved by a small but mighty group of fans. That doesn’t mean the series needs a reboot, though.

With news of HBO’s plan to reboot the series in a limited fashion, fans have come out to discuss the idea in depth. Many worry that new episodes will destroy the series. Others don’t think it is necessary. After all, Sex and the City was about four female friends navigating life and love in Manhattan. They did just that. They learned to work Manhattan, they fell in and out of love, and all of them eventually settled into what was considered their “adult life.” Perhaps the story is over, and Carrie and her pals need to be left in the early 2000s, where they served an important purpose in television history.