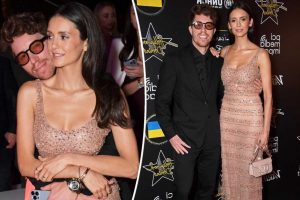 Shaun White and his girlfriend, Nina Dobrev, raised money for Ukraine while at a swanky gala in the South of France.

The Olympian jumped on stage Sunday at Hollywood Domino and PCI Media Impact’s With Love for Peace Gala during the 2022 Cannes Film Festival to auction off items for the United Nations Refugee Fund for Ukrainian refugees, a spy tells Page Six exclusively.

We’re told a signed custom whiteboard from White’s new collection went for $32,000, and an autographed pair of goggles rang in at $40,000.

Dobrev also got in on the action, selling off a picture of her and White — plus a kiss on the cheek — to a lucky bidder for $45,000.

The gold medalist, 35, and the former “Vampire Diaries” star, 33, have been a couple since 2020 but just made their first red carpet appearance together at the UK premiere of “Top Gun: Maverick” Thursday.

The war in Ukraine has been top of mind at this year’s Cannes festival.

Ukrainian President Volodymyr Zelensk gave a speech via video on opening night, quoting Charlie Chaplin in “The Great Dictator,” saying, “The hate of men will pass, and dictators die, and the power they took from the people will return to the people. And so long as men die, liberty will never perish.”

A woman was also thrown off a Cannes red carpet after painting her body to protest the war and crashing the “Three Thousand Years of Longing” premiere.

The Hollywood Reporter reported that “many diners gasped and some — including industry visitors from Ukraine — ducked under their tables” at Brasserie Le Casanova when a roar and orange smoke filled the sky. While it wound up being French fighter jets for the “Top Gun” screening, people were confused about what was happening.