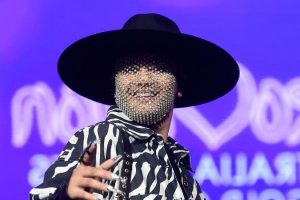 Eleven undoubtedly nervous but thoroughly pumped acts took to the stage at the Gold Coast Convention and Exhibition Centre on a soaking Saturday night and, as the event title put it, Australia Decided: Sheldon Riley, the local favourite in every sense, will represent the nation at this year’s 66th Eurovision Song Contest in Turin, Italy, in May. 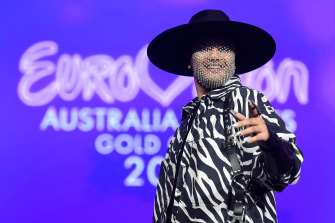 The 11 artists in competition at Eurovision – Australia Decides honed their performances over the course of three shows in a 24-hour period: on Friday night to an audience featuring a five-strong jury comprising artists and industry experts (including Australian pop superstar Darren Hayes and Alexandra Rotan from Norway’s 2019 entrants Keiino); on Saturday afternoon at a family-friendly matinee show that served as a dress rehearsal; and finally at the main event on Saturday night, the only show to be televised.

The show itself was pretty entertaining even before the drama of the vote, with just about every performer proudly embracing the camp, colour and unadulterated joy of Eurovision.

Norwegian guest stars Keiino opened it, all shiny pants and sparkling bustiers, with their dance-pop entry for the 2019 Eurovision Song Contest Spirit in the Sky – this time featuring an acrobatic vocal guest spot from reigning Australian representative Montaigne (who had the misfortune of having to perform virtually last year and didn’t qualify for the final).

Of this year’s contestants, Adelaide girl group G-NAT!ON took advantage of being first up with their sweet harmonies and crisp choreography for the feisty electronic pop banger Bite Me. Melbourne’s Erica Padilla, who qualified via a competition on TikTok, then relied on her powerhouse vocals to carry the Meg Mac-style gospel pop of To the Bottom.

She wasn’t the only artist to find their spectacular dress and heels potential obstacles, with the flamboyant, non-binary Sydneysider Seann Miley Moore shrugging off similar issues when singing the empowering, inclusive My Body and winning everyone over with bags of personality, to boot.

The audience switched on their phone lights for Gold Coast local Charley’s sad pop ballad I Suck at Being Lonely, but by seeming lost in her own world (and emotions), she struggled a little to capture their imagination. Likewise Sydney’s Andrew Lambrou, who pulled out the beloved Eurovision tricks of partly disrobing and singing some of his dark, housey Electrify in a language other than English (Spanish) but whose tune didn’t soar enough overall.

Then came the boy who would be king, Riley, who seems to have appeared on just about every reality-TV singing show around at some point but created something of a moment when, having always previously performed behind the security of some elaborate, glamorous mask to help his confidence, took this evening’s off during the Lewis Capaldi-style ballad Not the Same. It may have proved decisive.

Looking like one of Marvel’s Eternals in gold lame cape and boots, another reality-TV veteran, Sydney’s Paulini, brought yet more drama with an energetic We Are One, while #metoo champion Jonze performed a powerful, smouldering Little Fires in a spectacular, (literally) smouldering skirt.

The only duet of the competition came courtesy of Australia’s 2017 Eurovision representative Isaiah Firebrace, from Moama, and his playful chemistry with Central Coast indie kid Evie Irie on the likeable easy pop of When I’m With You, before a ton of verve and crunching guitar riffs propelled the only Western Australian contestants, Voyager, around the stage to a thrilling Dreamer.

Closing out the contestant performances was Toowoomba’s Jude York, whose I Won’t Need to Dream started with him singing wistfully at the piano and ended, winningly, with him spinning around the stage with liberated abandon.

Seasoned hosts Myf Warhurst and Joel Creasey held things together throughout with charm and wit (although haven’t all those pandemic jokes dated quickly?), with a little help from Dylan Lewis chatting to the artists post-performance in the backstage Green Room.

And while we waited for the results, Montaigne sang new single Always Be You, a collaboration with alt-rock titan David Byrne (who only appeared pre-recorded on the screens, sadly but unsurprisingly), showing all those who didn’t make it this year that things can still work out.