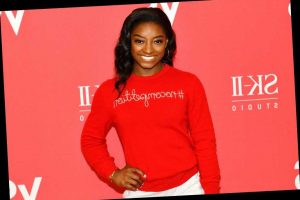 Simone Biles is holding out hope for the Tokyo Olympics.

While appearing virtually as a guest on the Today show Friday morning, the 23-year-old gymnast opened up about the upcoming Olympics games — which were delayed from 2020 to 2021 due to the ongoing COVID-19 pandemic — and expressed her hopes that they will still be able to take place this year as planned.

"We are in a pandemic, so we're kind of ready for whatever life throws at us at this point. We're training 'as if,' and whatever happens, happens," she told co-host Hoda Kotb. "We have to do what is safe for the rest of the world, for ourselves, to make sure everyone is healthy."

"Hopefully the Olympics can still be put on, even if it means we're in a bubble," she added. "I'll basically do anything at this moment. I know other sports have gone and done testing every day. And it just is a matter of time until we hear what the Olympic Committee has to say and what their precautions are going to be going forward. But whatever they say they want us to do, I'm in 100%."

Continuing, she added, "The delay has been hard on all athletes around the world. I'm not alone. But I'm sure everyone feels the same."

Back in March, the International Olympic Committee's (IOC) executive board met to finalize the postponement of the 2020 Olympics and announced that the event would instead be held from July 23 through August 8, 2021.

On Thursday, responding to a report from The Times of London that the games would be canceled, a local organizing committee said in a statement that the Olympics were still on and had the support of Prime Minister Yoshihide Suga.

"All our delivery partners including the national government, the Tokyo Metropolitan Government, Tokyo 2020 Organizing Committee, the IOC and the IPC [International Paralympic Committee] are fully focused on hosting the games this summer," read the statement, according to ESPN. We hope that daily life can return to normal as soon as possible, and we will continue to make every effort to prepare for a safe and secure games."

The United States Olympic & Paralympic Committee also released a statement, noting that it had not been informed of any change in the status of the upcoming event.

"Any official communication on the Olympic and Paralympic Games Tokyo 2020 will come from the IOC, Tokyo Organizing Committee and the Japanese government," the USOPC said. "We have not received any information suggesting the Games will not happen as planned, and our focus remains on the health and preparedness of Team USA athletes ahead of the Games this summer."

During her time on Today, Biles — the most decorated American gymnast — also referenced the response to the report, telling Kotb that seeing the IOC put out a statement refuting the claim lessened her qualms.

"I saw the news yesterday, and then to see the IOC and everybody kind of put out the news [denying the report] put my mind at ease," she said. "Because yesterday, I was sitting on the couch and my phone started blowing up."

"I really did not know what to think, I was like, 'Oh goodness, here we go again, like let's see,' but then that night my agent texted me some articles and kind of eased me," she added.

As for how her training routine has changed amid the global health crisis, Biles shared that she's been relying on technology.

"We did do COVID coaching virtually. We set up tripods in the gym so that we could still be in there. And that worked pretty well," she said. "It's been exciting to get back on track and just train for the Olympics."

As information about the coronavirus pandemic rapidly changes, PEOPLE is committed to providing the most recent data in our coverage. Some of the information in this story may have changed after publication. For the latest on COVID-19, readers are encouraged to use online resources from the CDC, WHO and local public health departments. PEOPLE has partnered with GoFundMe to raise money for the COVID-19 Relief Fund, a GoFundMe.org fundraiser to support everything from frontline responders to families in need, as well as organizations helping communities. For more information or to donate, click here.