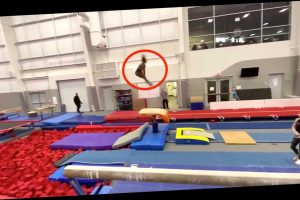 Simone Biles, already the most decorated gymnast in the history of the sport, looks like she’s about to add to both her legacy and her growing medals collection.

On Thursday, Biles shared a video on Twitter that featured a vault move no female gymnast has ever pulled off in competition:

As fans on reddit noted, it was the Yurchenko double pike.

Earlier this month, Biles posted another clip of her working on the move and landing in a foam pit, which caused fans to wonder if she was really going to try it. Now, she’s landing on a mat over the pit, showing she’s not only closer to perfecting it, but also hinting that she may be prepping it for the Tokyo Games.

In response to the earlier clip, The Washington Post reported that the move might be too risky for the Olympics given that it can lead to a head or neck injury without the right height and technique. A few male gymnasts have performed the move, but no woman has done so in competition.

END_OF_DOCUMENT_TOKEN_TO_BE_REPLACED

END_OF_DOCUMENT_TOKEN_TO_BE_REPLACED
We and our partners use cookies on this site to improve our service, perform analytics, personalize advertising, measure advertising performance, and remember website preferences.Ok